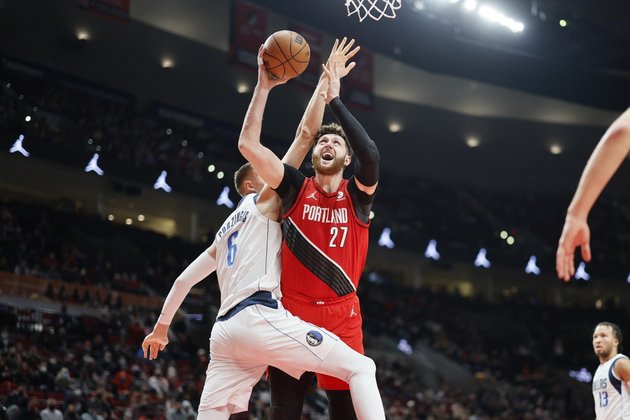 Kristaps Porzingis scored 22 points to lead seven players in double figures as the visiting Dallas Mavericks led wire to wire in a 132-112 win over the depleted Portland Trail Blazers on Wednesday.

Jalen Brunson contributed 20 points, 11 assists and six rebounds for Dallas, which led by as many as 23 and won for the 12th time in 15 games. Luka Doncic recorded 15 points, 15 assists and 15 rebounds.

The Mavericks led 98-81 before the Blazers scored the first seven points of the fourth quarter. Brunson ended the run with a 3-pointer, and Dallas maintained a double-digit lead for the rest of the game.

Dallas outscored Portland 40-25 in the first quarter while shooting 65.2 percent from the field.

Doncic and Porzingis combined for 24 points in the opening period for Dallas, which has won its past three meetings against the Blazers.

The Mavericks extended their lead to 63-45 on Frank Ntilikina’s 3-pointer with 4:30 left in the first half, but Portland cut the deficit to 68-59 heading into the break by closing on a 14-5 run.

Nurkic scored with 4:48 left in the third quarter to pull the Blazers within 80-76 before Dallas quickly regained control with an 18-5 run to end the period.

Doncic, who recorded his sixth triple-double of the season, played 37 minutes, including the entire first quarter.

Dallas will be without Tim Hardaway Jr. for an extended period after the veteran guard sustained a broken fifth metatarsal bone in his left foot on Tuesday.