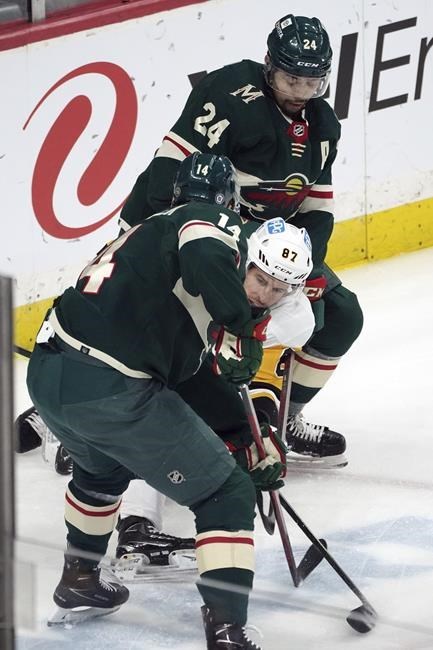 Jake Guentzel added his 32nd goal of the season for Pittsburgh. Rakell has three goals in six games since being acquired from the Anaheim Ducks for three players and a second-round draft choice.

Pittsburgh moved one point behind the idle New York Rangers for second in the Metropolitan Division. First-place Carolina, which beat Montreal 4-0 on Thursday, is six points ahead of the Penguins.

Kirill Kaprizov scored his 38th goal for Minnesota to tie the franchise record for points in a season with 83. Matt Dumba and Frederick Gaudreau also scored for the Wild.

Cam Talbot stopped 35 shots for Minnesota, which is second in the Central Division, four points ahead of St. Louis.

Rakell scored for the second time in three games just 1:06 in, redirecting a wrister from John Marino that slid between Talbot’s pads.

Rakell’s second goal of the game and 19th of the season came midway through the second period on a 2-on-1 break. Sidney Crosby waited patiently and stayed wide before passing across Talbot to Rakell, who lifted the puck up high.

They had an apparent goal by Jordan Greenway taken away after a video review showed Minnesota was offside on the play. The Wild answered just 14 seconds later as Gaudreau ripped a one-timer from the middle of the slot on a pass from Kevin Fiala for his 10th goal of the season.

Kaprizov tied the game 1:02 into the third after Ryan Hartman won a battle for a loose puck behind the net and fed Kaprizov racing down the middle of the ice.

With that, Kaprizov matched Marian Gaborik (2007-08) for the most points in a season in franchise history. Kaprizov had 14 goals in 16 games in March, setting a franchise record for a calendar month.

Penguins: Play at Colorado on Saturday.