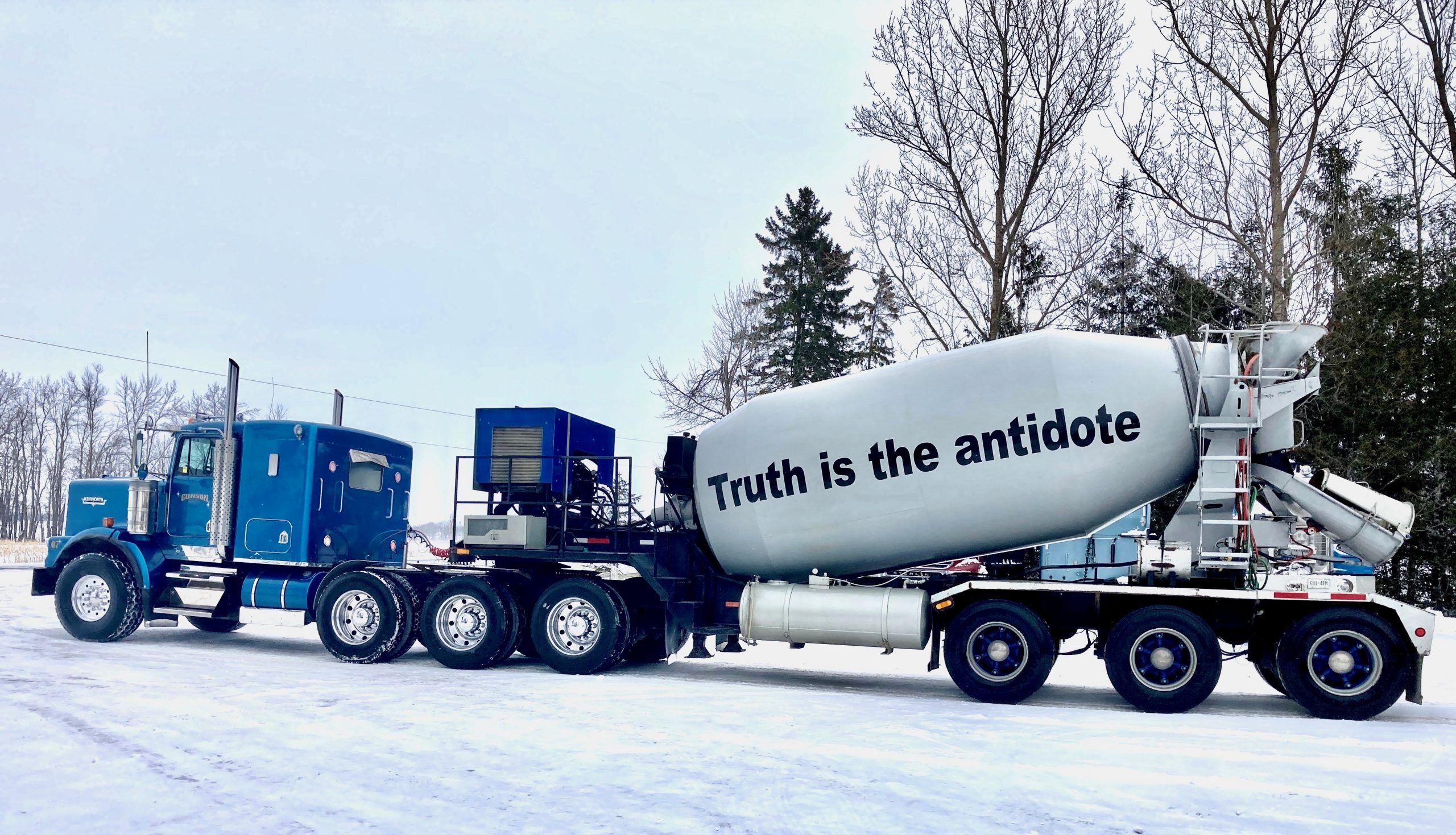 Two of Dave Gunson’s trucks will join a trans-Canada “Freedom Convoy” Friday to protest new federal rules which required Canadian and U.S. truckers to be fully vaccinated against COVID-19 to enter Canada as of Jan. 15.

“Truth is the antidote” is written on one of Gunson’s trailers, while Canadian flags will fly on the other. Gunson, the unvaccinated owner of Gunson Transport Ltd., in Tara, said he has safety concerns about the vaccine.

The vaccine mandate won’t affect him though, because he doesn’t haul goods back and forth from the United States. But he’s going to Ottawa to support his peers. If unvaccinated, they face 14 days in quarantine and testing to cross back into Canada.

And regardless of the Canadian mandate, the United States began barring unvaccinated truckers from entering its borders on Saturday, though Gunson has heard a court had stopped the U.S. trucker vaccination requirement.

The Globe and Mail reported Sunday that the U.S. mandate went ahead and that Ottawa has said it will be requiring truckers working within Canada to be vaccinated too, which also concerns Gunson. His trucking business generally stays within 150 kilometres of Grey-Bruce. But an inter-provincial federal vaccination mandate would impact him, he said.

“There’s a lot of long-haul truck drivers in Grey-Bruce for sure. And there’s some that finally, their arm’s been twisted far enough, that they can’t afford not to. So they’ve grudgingly gone to get their shots, just so they can keep on working,” Gunson said.” But there’s quite a few holding out also.”

He’ll be meeting with Alex Ruff, the federal MP for Bruce-Grey-Owen Sound on Friday in Ottawa. Local MPP Bill Walker’s office responded to an invitation by saying he’s not available that date and time, Gunson said in an interview Monday.

Ten big local rigs and likely some passenger cars are joining the convoy, which started Sunday in British Columbia to protest of the federal vaccination mandate, Gunson said.

He’s unvaccinated because he’s concerned about potential long-term health effects. He knows truckers who caught COVID in the early days of the virus and also some who got infected more recently. A childhood friend died of it. “I see both sides of the spectrum here,” he said.

“But for me personally, I’m not convinced that it’s as safe as everyone is letting on or telling me . . . It seems to me, people are trying way to hard to tell me something’s good. If it was that good, I wouldn’t have to be sold on it.”

One trucker he knows got very sick after catching COVID-19, after a run down to the States. Due to word of the coming trucker vaccine mandate, that trucker got his first COVID-19 shot recently “and was very, very sick. He said it was twice as bad as the virus.”

He got sick again after his second shot too and has vowed not to get a booster, Gunson said. “Stuff like that scares me.”

He said there’s so much vaccine misinformation “on both sides,” which is what the “Truth is the Antidote” sign on his trailer alludes to. He had a very brief conversation with his family doctor almost a year ago about his vaccine concerns.

“She acknowledged my concerns but she didn’t try to persuade me one way or the other, to be honest. She just asked if I was interested in getting the shot.”

By then, he was concerned he’d already had COVID-19 and was “definitely not” going to get it, in light of reactions experienced by others.

Gunson and other local truckers will be leaving from the Ministry of Transportation inspection area, just at the southern doorstep of Owen Sound along Highway 6/10, Friday at 9 a.m.

The Canadian Trucking Alliance issued a statement Saturday which said the “vast majority” of Canadian truckers are vaccinated at a rate “closely mirroring that of the general public.”

The group “strongly disapproves of any protests on public roadways, highways, and bridges,” and anything that disrupts the motoring public. Truckers should just protest on Parliament Hill or contact their local MP, the alliance statement said.

It noted both Canada and the U.S have vaccination requirement to cross the border. “This regulation is not changing so, as an industry, we must adapt and comply with this mandate,” CTA president Stephen Laskowski said in the statement.