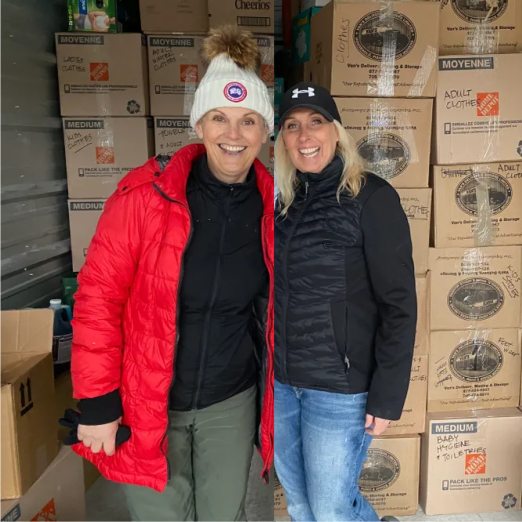 The Vest Project, a non-profit association created by Cindie D’Agostino and Lori Burns, is raising funds locally to purchase defensive safety gear for established and trusted organizations in Ukraine.

“We have Ukrainian friends in our community, in Ontario and in Canada, who have family in Ukraine who have been displaced or left behind to defend their country, which is now being devastated,” D’Agostino said.

“There is no room for complacency. Everyone needs to act now because this could be the beginning of a larger plot by Vladimir Putin to re-take countries that were once a part of the Soviet Union.”

The duo said they know people are feeling helpless at this time and this is a way for people to lend assistance and to make a difference.

“It’s our moral duty to outfit as many freedom fighters as possible,” said Burns.

“People have been unsure what to do to help. We’re providing a platform where people can join in.”

She said the goal is to provide the opportunity for people to support the frontline defenders, through donations.

All funds go directly to the purchase of non-lethal defensive protective gear for the freedom fighters of Ukraine.

“The vests fill an important need as other groups cover immediate life-sustaining priorities such as food and medicine,” Burns said.

“Since many governmental and non-governmental organizations are focusing on humanitarian aid, we decided to put our efforts into raising funds to support the purchase of non-lethal, protective gear. We’ve teamed up with Ukrainian organizations that have established supply lines for this gear, some for as long as eight years or more in response to earlier conflicts in Crimea and the Donbas region.”

As well as accepting immediate monetary donations, the two women will be organizing fundraisers to raise awareness of this campaign to enlist further support from the community and reach as many people as possible.