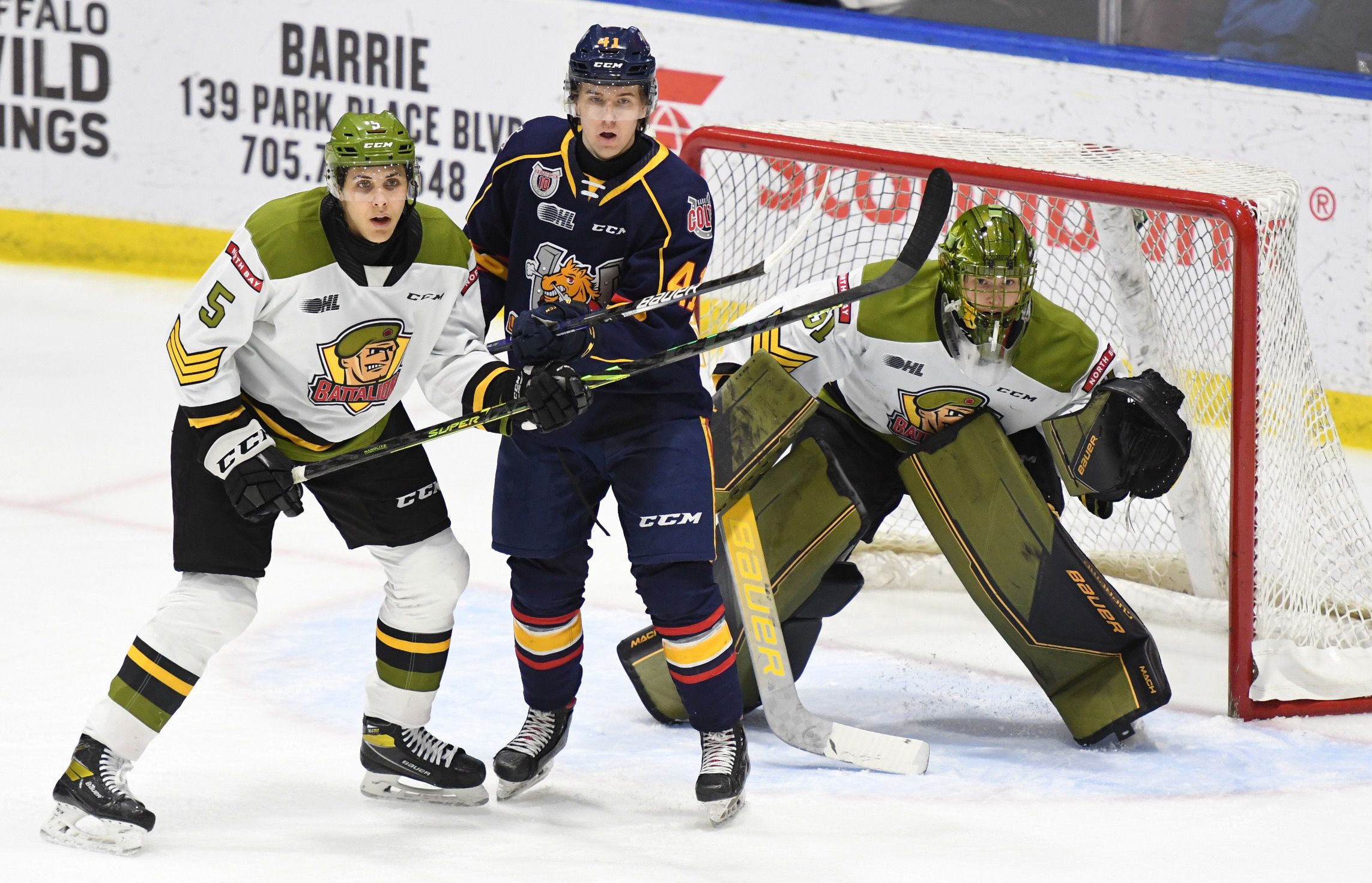 The North Bay Battalion completes its home schedule at 7 p.m. Thursday against the Oshawa Generals, one of three clubs the Troops could meet in the first round of the Ontario Hockey League playoffs.

“In their lineup they’ve got some dangerous players, and they’re really big and heavy on the back end with good defence, so we’ve got to be prepared and ready for that and play our best hockey,” Battalion coach Ryan Oulahen said Wednesday.

North Bay, boasting a won-lost-extended record of 41-18-6 for 88 points, has clinched first place in the Central Division and the second seed in the Eastern Conference behind the East Division’s Hamilton Bulldogs. The Kingston Frontenacs, Mississauga Steelheads and Barrie Colts are locked into the next three spots respectively.

Oshawa, 29-30-6 for 64 points, is sixth in the conference with three games to play. The Ottawa 67’s have 62 points with two games left, and the Peterborough Petes, also with 62 points, have one game to play. But the Petes hold the tiebreaker against either of the other two teams, with 27 regulation and overtime wins, more than either Oshawa or Ottawa can reach if in a tie with Peterborough.

The Battalion will face the seventh-place club, currently Ottawa by virtue of fewer games played than Peterborough, in a conference quarterfinal.

“The message is, ‘Let’s not step off the gas pedal here,’” said Oulahen.

“We’ve got three more games to really prepare ourselves and try to get us going in the right direction in terms of being the best possible team we can be when it really matters, so that’s how we’re going to approach it, just like we have been all season. It’s one game at a time, one day at a time, prepare the same way and get better each and every day.”

The Troops visit the Sudbury Wolves on Friday night before ending the schedule Sunday at Oshawa.

The Battalion, ranked No. 8 this week in the Canadian Hockey League Top 10, has several players seeking milestones in the final games, led by Brandon Coe, who has 34 goals and a team-high 65 assists for 99 points in 61 games.

Kyle McDonald is to complete a five-game suspension for a check on Chas Sharpe in a 2-1 win March 27 at Mississauga and return to action at Sudbury.

“I know he’s excited to return to the lineup,” noted Oulahen. “The big thing with him this weekend will be he’s got two games to get up to game pace, game speed. We’ll try to play him in a lot of different situations to work on his conditioning and, again, be ready for playoffs.”

In addition to Fan Appreciation Night, the Oshawa game will feature a salute to Battalion overagers. Nipissing-Parry Sound Catholic District School Board Night will see prizes from Battalion sponsors and a second-intermission shootout for a shopping spree. A former Battalion star is to appear as a surprise guest.

Fans can use March 9 tickets for the game, which was postponed to that date from Dec. 31 because of covid concerns and rescheduled again when the season was extended by two weeks.