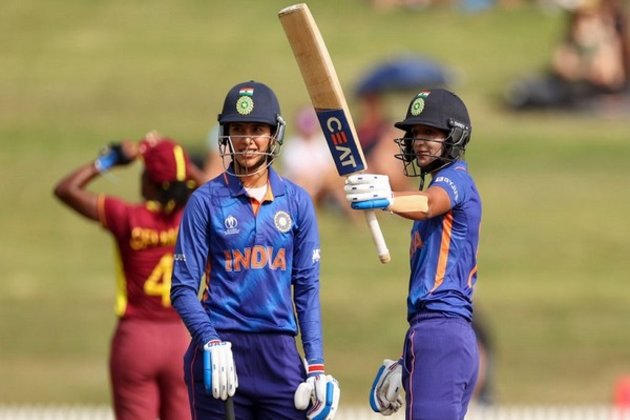 Hamilton [New Zealand], March 12 (ANI): India opening batter Smriti Mandhana shared the Player of The Match award with Harmanpreet Kaur and expressed happiness after her side defeated West Indies in the ongoing Women’s ODI World Cup here at the Seddon Park on Saturday.

Centuries from Smriti Mandhana, Harmanpreet Kaur were backed by a courageous bowling performance to thrash West Indies by 155-run. India opener said she was happy with the batting unit’s effort to keep the scoreboard moving in their match and they have learned from mistakes.

“I think scoring a century and not being a Player of the Match is something I really wouldn’t want as a player. I think we both contributed equally for us to score 300. So, I think it’s good for us to share the trophy and I think both are good contenders to get it. We learnt from our mistakes and that’s something we thought we are not going to repeat it,” said Smriti Mandhana in the post-match presentation.

Talking about the 184-run partnership with Harmanpreet, Smriti remarked, “As batters, we both prefer chasing and setting the target both together. Last game we didn’t get going and in chasing it’s very important to get the momentum.””Our strengths are really different because she is really good with spin and I like pace on the ball. So when the spinner comes on I give her the strike and when the pacer comes on she gives me the strike. I’m sure ICC will be giving another trophy and I’m sure they have enough budget to do that,” she added.

This is West Indies’ first defeat in the tournament. The score of 317 is the highest by the Indian women’s team in the World Cup.

West Indies collapsed for 162 in the 40.3 overs. Jhulan Goswami scalped her record-breaking wicket in the 36th over while Sneh Rana ended the day with three wickets against her name. (ANI)