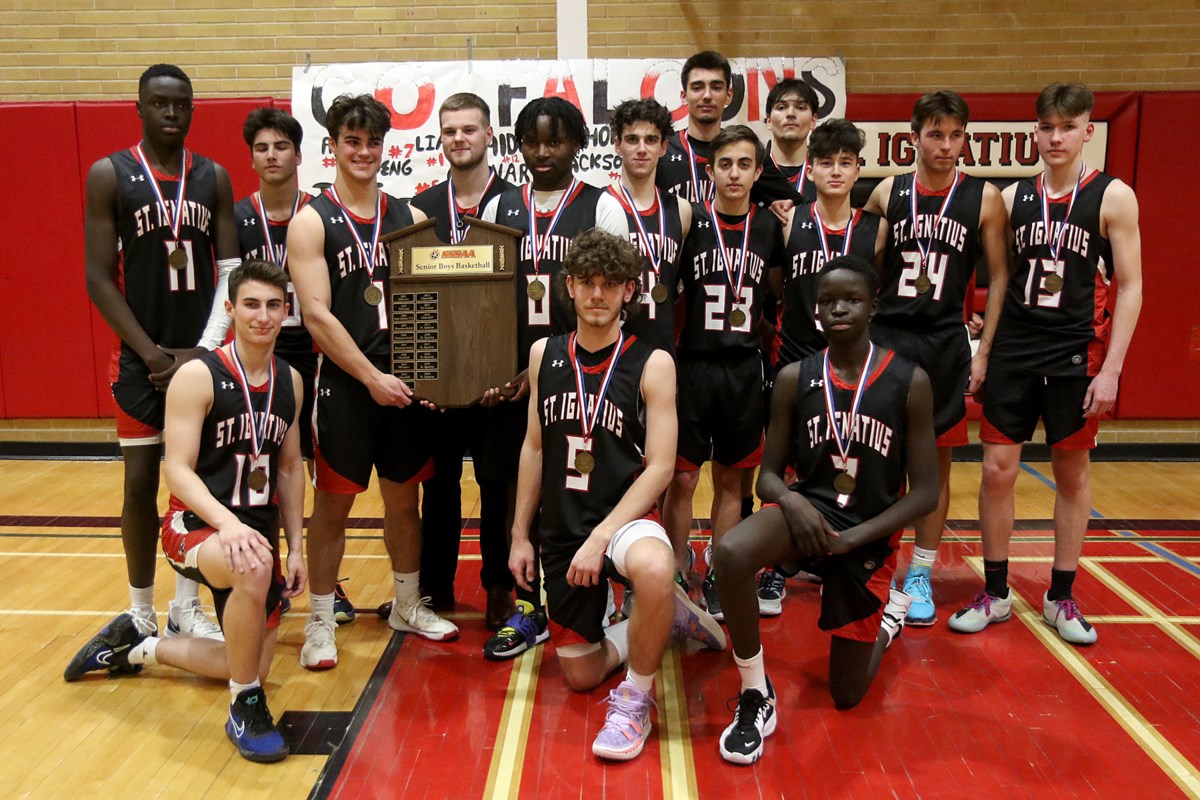 Makeer Makeer has 20 and A.J. Tshllombo 13 in 94-52 win over Hammarksjold in the championship game.

Lawrence buried nine three-pointers and put up a game-high 30 points for the Falcons, who fell two points short of their regular season average 96 points a night, dropping the Hammarskjold Vikings 94-52 on their home court to take the trophy once again.

For the Vikings, the title drought increased to 15 years.

Makeer Makeer had 21 for the Falcons and A.J. Tshllombo powered his way to 13, the trio accounting for 64 of St. Ignatius’s 94 points.

It’s not how the Falcons were hoping to end the season, but with COVID forcing the cancellation of provincials, they’ll take the local championship and savour it for a lifetime – especially after losing all of last season to the pandemic.

“After we found out there was no OFSAA, this was really our last chance to play basketball. We wanted to put on a show for all the fans who came out because we haven’t had a lot of fans this season,” Lawrence said after the Thursday night triumph.

There weren’t too many misses for the senior guard.

“I was just trying to help out my teams. I was taking good shots, open shots, that’s it,” Lawrencesaid.

The Vikings defenders paid a little too much attention to Makeer and Tshllombo, leaving Lawrence open most of the night.

He made them pay, putting up 16 in the first half, while Makeer, who won a senior boys football title last fall, was held to 10 and Tshllombo had just four at the break.

St. Ignatius, who led by eight after one, stretched their lead to 19 in the second, hitting the break up 44-25.

They poured it on in the third, outscoring Hammarskjold 32-13, Makeer putting up eight of his 10 second-half points in the quarter.

There just wasn’t enough offense for the Vikings, who were unable to regularly penetrate the tenacious Falcons defensive scheme.

St. Ignatius coach Dino Buset said his squad prided itself on its defence all season long, evident in their 10-0 regular season record.

“Give credit to Hammarskjold. We’ve had some games that we’ve been fairly close with them, but nothing like tonight, at the beginning, especially. Their defensive scheme at the beginning really hurt us a bit, but Jackson came through and had a really good game,” Buset said.

“Tonight was better than some nights, but we can always count on him to give a lot in terms of the defensive and the offensive.”

Makeer said the title means a lot to the entire school community.

“We got a lot taken from us and this is a really good chance to come together as one and for our seniors, it’s really good to go out a good hurrah,” said Makeer, who plans to either take his game to university next season – possibly Lakehead – or return for a final season of high school ball.