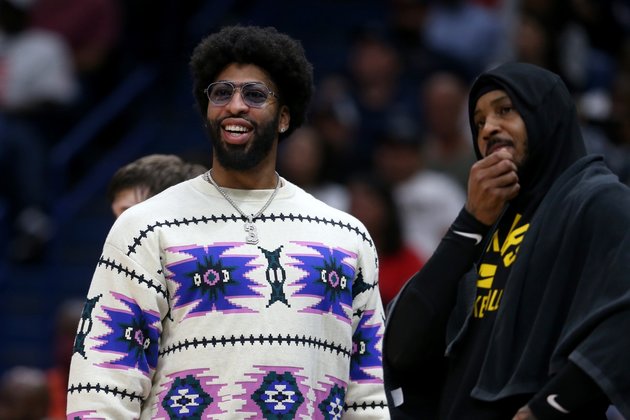 With their season hanging in the balance, the Los Angeles Lakers hope to welcome back a pair of superstars on Friday for a must-win home game against the New Orleans Pelicans.

Both Anthony Davis and LeBron James are expected to be game-time decisions for Lakers coach Frank Vogel. Davis has missedthe past 18 games with a mid-foot sprain, while James left the just-completed road trip with a sprained ankle.

When asked about the status of his superstars Thursday, Vogel said, “We can’t answer that question until (Friday).”

The short-handed Lakers (31-45) dropped a 122-109 decision to the Utah Jazz on Thursday in Salt Lake City and fell into 11th place in the Western Conference with their fourth consecutive defeat. Los Angeles has the same record as San Antonio but trails the Spurs based on a tiebreaker.

The Lakers are on the outside looking in at the play-in tournament with six games remaining.

Russell Westbrook tallied 24 points and seven assists for the Lakers at Utah. Dwight Howard added 21 points and 12 rebounds while starting at center. Los Angeles allowed the Jazz to shoot 51.1 percent from the floor.

The Lakers are 4-14 without Davis since mid-February. He has averaged 23.1 points and 9.7 rebounds in 37 games this season.

Davis also has missed 21 other games, the bulk because of a knee injury.

James — who averages 30.1 points, 8.2 rebounds and 6.3 assists — has been out for three of the past four games. He has missed 21 games for a variety of reasons, including a one-game suspension.

“I’m a coach that, honestly, prides myself on a boring rotation and erring too, too much on the side of stability,” Vogel said about seeing his stars miss so much time. “I’ve not been able to do that this year, and that’s been very difficult for me as a head coach.

“But you’ve got to make tough decisions and try to find something that’s going to get the job done. It’s not the way I had certainly envisioned it, but you have to adjust on the fly in this league.”

The Pelicans beat the host Portland Trail Blazers 117-107 on Wednesday and have won five of their past seven games. In New Orleans’ 116-108 home victory over the Lakers on Sunday, Brandon Ingram scored 26 points in his return from a 10-game absence caused by a hamstring injury.

The Pelicans (33-43) won that one despite seeing James score 39 points and make seven 3-pointers, most of which came after he sprained his left ankle in the second quarter.

The Pelicans are ninth in the Western Conference, two games ahead of the Spurs and the Lakers.

In New Orleans’ victory on Wednesday, CJ McCollum put up a team-high 25 points. He was playing in his first game at Portland, which he called home for 8 1/2 seasons, since a trade in February.

“It was tough. I got off to a good start, but then I was (emotionally) tired,” McCollum said. “I almost airballed a free throw. I was physically drained, mentally drained. It was a lot to go through.

“I’m glad I was able to go through it, play and help my team win, and I’m looking forward to turning the page.”