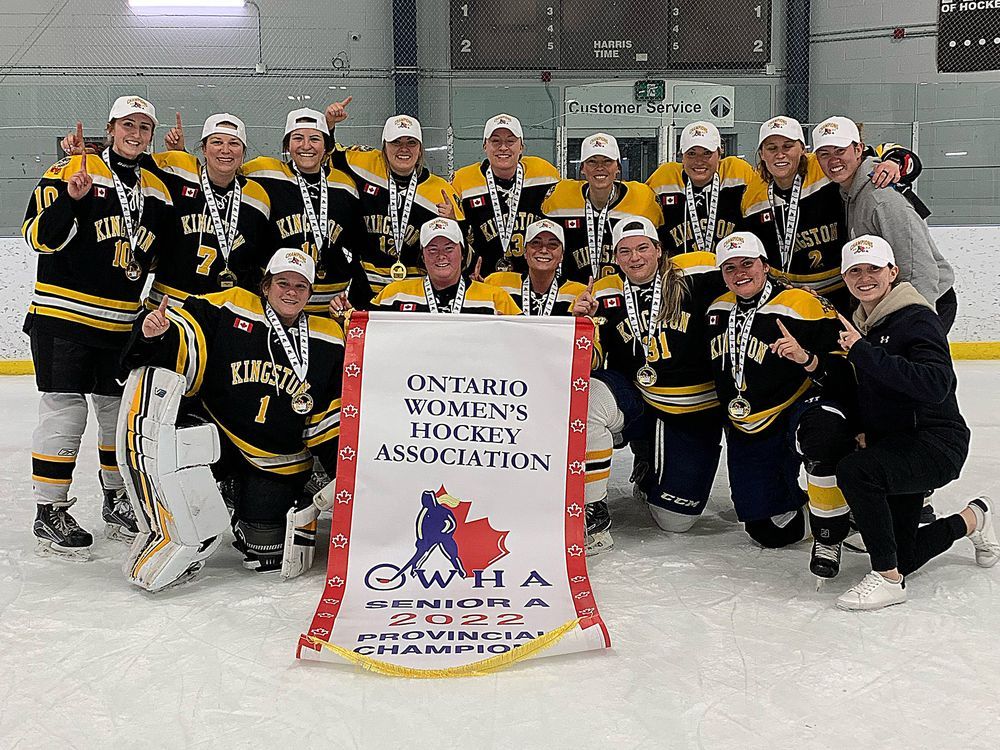 The Kingston Ice Wolves returned to Kingston as the top Senior A team after the Ontario Women’s Hockey Association Provincials in the Greater Toronto Area last weekend.

The team posted four wins and a loss in preliminary round-robin play before defeating the Whitby Wolves 4-3 in Sunday morning’s semifinal.

“We are extremely excited for our Senior A team’s victory in the Provincial finals,” Jon Walker, president of the Kingston Ice Wolves organization, said. “While we have long had a robust senior house league program, this is the first time they have created a senior competitive team.”

Walker said the team is made up of players who have played in high-level programs throughout their hockey careers. Many of the players have competed at Canadian or U.S. universities or colleges or at the professional level.

The Ice Wolves U22 team lost in the bronze medal game, 2-1 to the Ottawa Senators. They were 2-2 in round-robin play but lost their semifinal match 4-2 to the Durham Lightning.

The Napanee Crunch U9 B team went undefeated and outscored its opponents 26-6 in six games at the Provincials while the Napanee U18 BB won bronze with a 4-1 victory over the Scarborough Sharks. Also participating were the Crunch’s U11 BB and U15 BB teams.

The tournaments were held across Ontario in Kingston, Oakville, Windsor and Whitby.

The new playoff format this season featured a season-ending tournament for eight teams that had been crowned league champions or runners-up rather than playing head-to-head playoff series.

Teams competed for league championships throughout the month of March in round-robin playoffs.

The Kingston Canadians U16 AA team was the only area team to make an OMHA final. They lost 4-2 to  Oakville Rangers Red in the championship game played at the Invista Centre on April 3.

The Kingston Canadians U16 A team went undefeated in three games this past weekend in Whitby but lost 2-1 in the semifinals Sunday morning to the Orillia Terriers.

Other local teams that competed in OMHA tournaments but did not advance to the finals were the Kingston Canadians U12 AA, U13 AA and U12 Tier 1 teams, and the U14 Greater Kingston Jr. Gaels AAA squad.