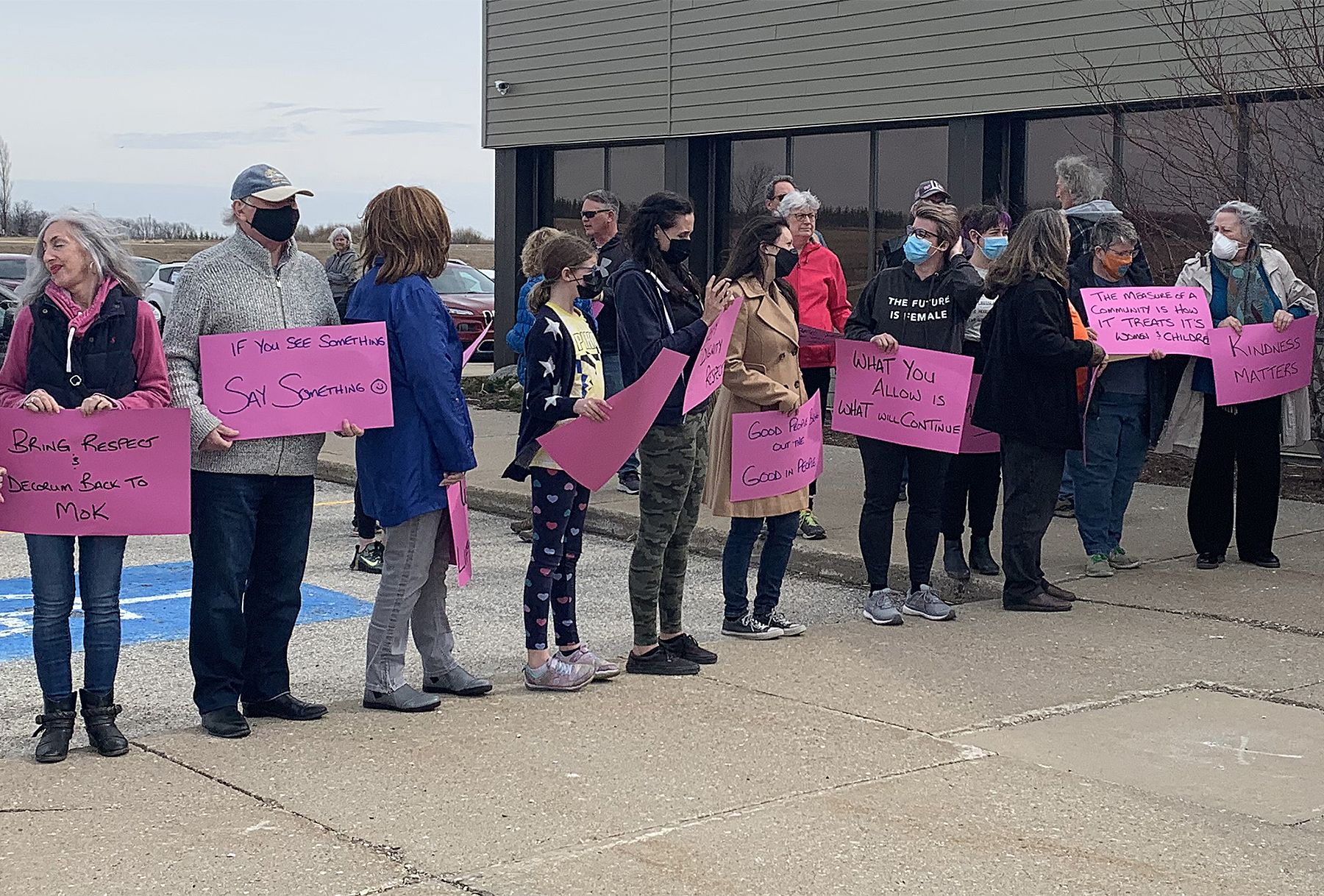 The protest was organized by Meagan Fair and Cheryl Cottrill after a disrespectful remark was made when Coun. Laura Haight spoke at a council meeting April 4.

“I was honestly blown away at the number of people that came out in person as well as the private and public messages online offering support,” said Fair. “It was so great to see more engagement in Kincardine politics as well as those that have come out to show their support to municipal staff. It can be a thankless job and they have all had to do so much more throughout this pandemic than what’s typically asked of them and there are people in the community that see that and appreciate it.”

During a clip of the recorded council meeting April 4, a man can be heard uttering an offensive remark under his breath after some discussion of Haight’s motion to close Queen Street on Sundays to create a pedestrian promenade.

Haight said in an interview in the days following the meeting she heard Coun. Dave Cuyler make the offensive remark under his breath, calling her an “effing c-word,” describing rather than repeating the remark.

Cuyler issued a statement containing an apology for making the comment, which he said was “not directed to anyone other than myself.” Cuyler said he didn’t intend to offend or discriminate, and that he was “frustrated with myself for personal reasons when I openly commented to myself.”

“(We wanted to) remind council that their conduct matters and they need to do better for the community, as their behaviours as leaders in our community is not an example that we want to set to a growing community,” said Fair. “All of the challenges that we face as a community like CAO recruitment, physician recruitment, are all impacted by the way that they treat each other and staff.

“We want this to be a moment of reflection and a reminder to council that this is an election year and that the community is paying attention,” she continued. “I don’t want this event to be a deterrent for others that want to enter local politics.”

“Hopefully this is a catalyst for change and respect and decorum can be brought back to the council chambers and municipal building,” added Cottrill. “I think the protestors yesterday modelled the behaviour they would like to see from our councillors – respect, peace and positivity.”

Cuyler’s comments are being investigated the municipality’s integrity commissioner, so the matter was not discussed at the council meeting that followed the protest.

Carnations were left inside the doors of the municipal office for staff to take home with them, as a reminder that they are being thought of.

The next municipal election is in October and Fair is encouraging anyone who feels they are not well represented to run for council.

With files by Scott Dunn