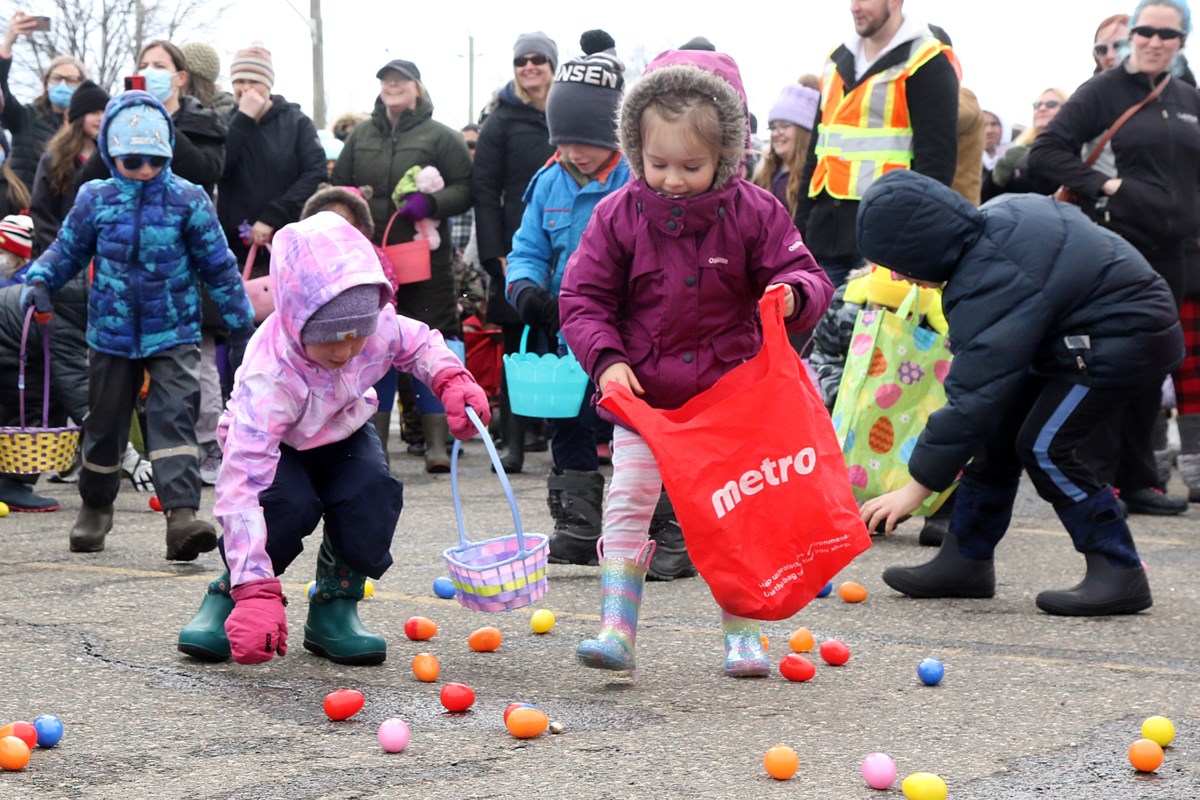 At least 1,000 children took part in the event, which returned for the first time since 2019, cancelled the past two years because of COVID-19.

THUNDER BAY – Even after two years without a Easter egg hunt, Kayla Mellis has her strategy down pat.

The 10-year-old joined the chaos on Good Friday morning, in the parking lot of the Slovak Legion, her eyes set on the colourful plastic eggs filled with candy and prizes, hoping to indulge her sweet tooth and have a little fun at the same time.

The event didn’t disappoint, she said.

“I just saw them placing all the eggs down and I was looking for the eggs that were mostly close together so I could get as much as I could,” the youngster said.

Also in the eight and older group was Emery Garriock, a nine-year-old who said it was a blast taking part in the hunt, for one reason and one reason only.

“I really like eating the chocolate and I like meeting the Easter Bunny every year,” she said.

She said she missed not having the event the past two years, the hunt cancelled because of restrictions related to COVID-19.

The smiles on the thousand or so kids that took part on Friday, racing to gather up some of the 13,000 eggs laid out in the parking lot – a substitute for the water-logged Frank Charry Park, the traditional home of the Easter egg hunt – were enough to convince Hill City Kinsman organizer Jason Freeburn that bringing back the event was the right thing to do.

“We are so excited to be able to bring this event back. It’s something that we loved to do and did it for a number of years before the pandemic. We were all ready to go in 2020 and of course the pandemic came along,” Freeburn said.

“It was looking for a while like we may not be able to make it happen this year, but with the relaxing of the rules, everyone came together and we had lots of support to be able to put it on. I’m very happy with the turnout.”

The Kinsmen organization has the stuffing of the eggs down-pat, organizing an evening dedicated to filling the eggs with the 21,000 pieces of chocolate and vouchers for those lucky enough to find one of the dozens of special prize eggs.

It’s all about the children, Freeburn said.

“We love to do events, especially for the kids. This event, you get to see it happen right away. You get to see them collect their eggs and open their eggs up and see what’s inside, if it’s a chocolate or maybe they get a prize,” he said.

Freeburn said the ground was just too wet at Frank Charry Park, but said he hopes the weather co-operates and allows them to return next year.

Gage Vic, 10, knows he’ll be back. He looks forward to the Easter egg hunt every year. The site really doesn’t matter.

“This location is very epic and I like it,” he said.