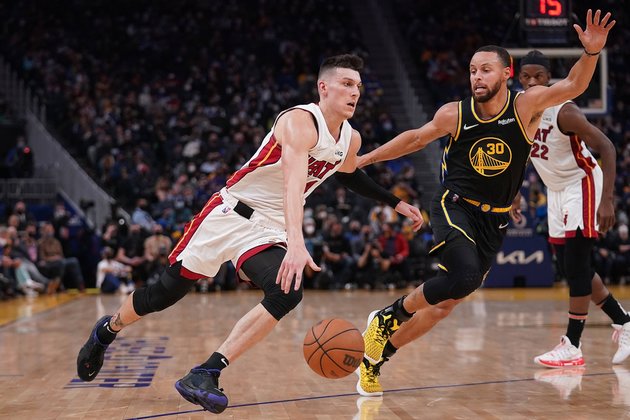 Jordan Poole and Gary Payton II combined for 46 points and hit key baskets down the stretch Monday night as the Golden State Warriors overcame an off night from Stephen Curry to outlast the visiting Miami Heat 115-108 in San Francisco.

Curry shot just 1-for-10 on 3-pointers and 3-for-17 overall in a season-worst, nine-point performance, but five teammates, led by Poole’s 32 off the bench, scored in double figures to assure Golden State’s second straight win and fifth in its last six games.

Despite losing Jimmy Butler to a sprained right ankle in the third quarter and playing their second game in two days, the Heat remained competitive down to the final minute thanks in large part to 17 3-pointers, including four each from Tyler Herro and Kyle Guy.

Butler had to be helped to the locker room with 3:14 remaining in the third quarter after turning his ankle on a drive to the hoop. He never returned, finishing with 22 points in 28 minutes.

Miami had a chance to get closer, but Andrew Wiggins swiped a Kyle Lowry pass and assisted a Payton layup that extended the Golden State advantage to six.

Poole’s 32 points equaled the third most of his career and came on 12-for-17 shooting overall and 5-for-9 on 3-pointers. The Warriors were outscored 51-42 by the Heat from beyond the arc.

Curry’s nine points were three fewer than any previous game this season. The last time he had fewer than nine was when he totaled five in just nine minutes before leaving a game against the New Orleans Pelicans in April of 2019 with a sprained foot.

Curry found time for 10 assists in his 32 minutes.

Payton finished with 14 points for the Warriors, while Wiggins went for 22, and Nemanja Bjelica and Otto Porter Jr. 10 apiece.

Herro’s four 3-pointers accounted for 12 of his 18 points, while Guy’s four treys produced all but two of his 14 points for Miami, which was beaten 115-113 at Sacramento on Sunday.

Caleb Martin added 19 points and Lowry 16 to complement a team-high 11 assists for the Heat, while Omer Yurtseven snatched a game-high 17 rebounds to go with five points.