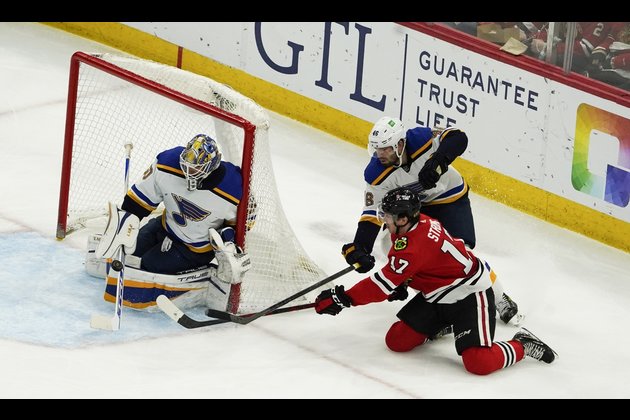 Jordan Binnington made 30 saves for his 10th career shutdown as the visiting St. Louis Blues blanked the Chicago Blackhawks 4-0 on Sunday.

David Perron scored twice to pace the offense for the Blues, who extended their point streak to seven games (6-0-1).

Jordan Kyrou and Pavel Buchnevich also scored for the Blues and Brayden Schenn had two assists.

Binnington earned his second victory in the last three St. Louis games while trying to reclaim his lead role. Ville Husso started nine times during a span of 11 games while Binnington was struggling.

Marc-Andre Fleury made 31 saves for the Blackhawks, who have won just three of their last 11 games.

The Blackhawks outshot the Blues 12-8 in the scoreless first period. Chicago’s best scoring chance came on clean break-in by Kirby Dach, but Binnington denied him with a glove save.

Kyrou had two golden scoring opportunities for the Blues. On the first, Fleury waited him out on a breakaway and forced Kyrou out of shooting room.

On the second opportunity, Schenn’s 2-on-1 pass slid under Kyrou’s stick in front of an empty net.

The Blues opened the second period with a dangerous power-play, but Vladimir Tarasenko hit the post on the best scoring chance. After that advantage passed, Kyrou converted a give-and-go play with Schenn to score into an empty net and put the Blues up 1-0.

Buchnevich made it 2-0 with 13:04 left in the period after Robert Thomas stole the puck behind the Chicago net and made a centering pass to him in the slot.

Perron’s power-play goal with 1:52 left in the period pushed the Blues’ lead to 3-0. Schenn set up Perron’s one-time shot with a cross-ice pass into the left circle.

Perron struck again 3:04 into the third period by sweeping a loose puck through Fleury from a tough left-side angle. He had scored just three goals since Oct. 25 before this breakthrough game.