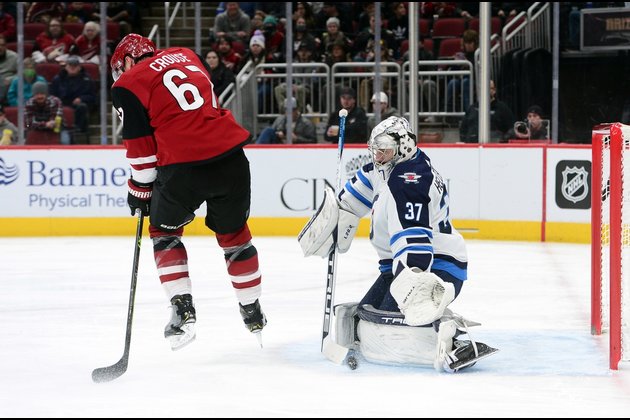 Pierre-Luc Dubois continued his strong bounce-back season by scoring the deciding goal to lead the visiting Winnipeg Jets to a 3-1 victory over the struggling Arizona Coyotes on Tuesday.

Shayne Gostisbehere replied for the Coyotes, who sit last in the NHL and have just one win in their last nine games (1-7-1). Goalie Karel Vejmelka stopped 45 shots — including all 19 he faced in the third period — to give his squad a chance in what could have been a one-sided loss.

Svechnikov, who returned to the lineup after missing the two previous games due to injury, opened the scoring with 2:26 remaining in the first period. Off the rush, Josh Morrissey fed a cross-ice pass that Svechnikov hammered for a one-timer from the right face-off dot for his third goal of the season.

Dubois doubled the lead when he notched his 15th goal of the season at 14:40 of the second frame.

After taking a pass from Scheifele at the side of the net, Dubois quickly flicked a back-hand shot that Vejmelka could only get a piece of before the puck trickled over the line. Dubois managed only nine goals in 46 games last season, in which he was traded to Winnipeg from the Columbus Blue Jackets.

Gostisbehere gave the Coyotes a much-needed boost by putting them on the board early in the third period. The defenseman intercepted Logan Stanley’s ill-timed cross-ice pass, eluded a check and then snapped a short-side shot home at 6:41 to make it a one-goal game.

However, with the hosts pushing feverishly for the equalizer, Ehlers scored an empty-net goal with 44.9 seconds remaining in regulation to ice the game.