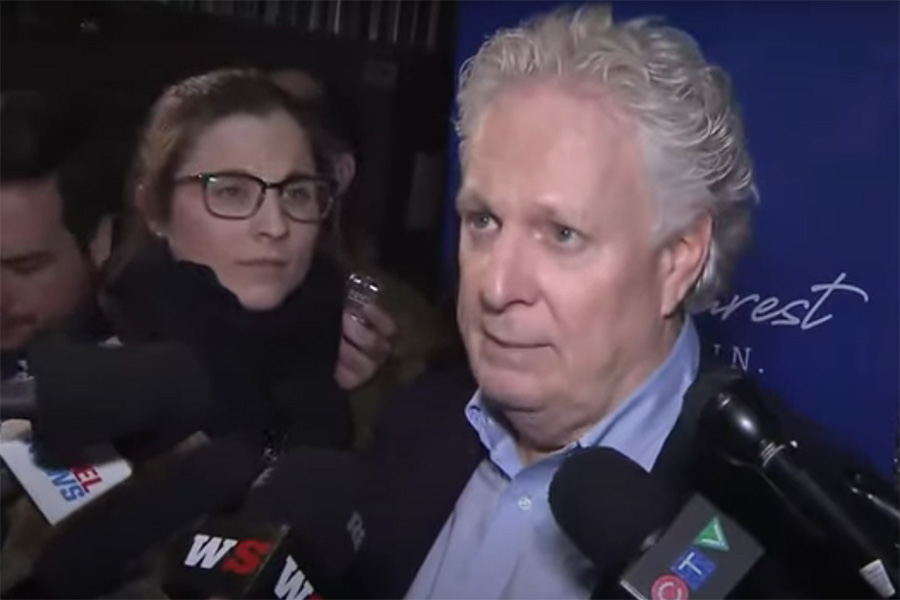 Most political pundits don’t think Charest stands a chance, but the prospect of a Pierre Poilievre coronation just got trickier

Screenshot from Jean Charest’s leadership launch in Calgary on March 10.

Maybe Jean Charest is delusional. Or maybe the alleged “Mafia boss” — that’s what the peeps behind Pierre Poilievre, the presumptive frontrunner in the Conservative Party of Canada leadership race are calling Charest — has Guido the killer pimp in his corner.

Tom Mulcair, the former NDP leader, offered the view this week before Charest made official his intentions to run on Thursday, that Charest should “make very quick work of Pierre Poilievre.” According to Mulcair, Charest has the organizational might to pull it off with teams up and running in all 338 ridings in Canada.

Most political pundits guffawed. Charest has been out of politics too long and lost touch, they mused. The CPC of today is not the one Charest led in the 90s. It’s not even the one Stephen Harper led until 2015. It’s way more right-wing and angrier.

To be sure, the path to victory – if there is one – seems daunting for Charest.

Philipe J. Fournier of 338Canada.com estimates Charest will need to sign “between 80,000 to 100,000 new members” to have any realistic chance of winning. The actual votes for the leadership won’t be counted until September 10, but the cutoff to sign memberships is June 2, which leaves less than 90 days for Charest to mount a challenge.

Poilievre has had a running head start with endorsements from a number of sitting MPs. Charest, meanwhile, is also weighed down by some political baggage from his days as Quebec premier, not the least of which is the fact he was the leader of the Liberal party at the time, which is separate and distinct from the federal Liberal Party led by Justin Trudeau, but nevertheless has become cannon fodder for Poilievre handlers eager to cast Charest as a tax and spend liberal just like JT.

Much has also been made of Charest’s seeming lack of support in the Conservative Party heartland out west. In that vein, Charest talked up his support for pipelines at his launch on Thursday and called on the Liberals to delay the phasing in of its carbon tax given the effects on the global price of crude as a result of Russia’s invasion in Ukraine.

Charest also made reference in his speech to the need for a “national” Conservative Party in Ottawa. He talked about the party’s “responsibility” to Canadians, referring to the current state of the party as “fractured” and “distracted” and the country’s politics as “balkanized.”

The implication was clear. The Conservative Party as currently positioned as the voice for angry populism rooted in western separatism doesn’t stand a chance of forming a government. Hence Charest’s decision to launch in Alberta, which has become increasingly isolated from central Canada.

Indeed, what does Poilievre as leader offer the Conservative Party – and westerners – besides more alienation?

A cover story in Maclean’s this week notes Poilievre’s smarts and political instincts (yada, yada). At the same time, it points out Poilievre’s penchant for toxic rhetoric that makes him come off as cartoonish.

That’s one problem for Poilievre. He can’t really be taken seriously. The other is that he has positioned himself as the “freedom” candidate for the anti-vax, “Freedom Convoy” types who occupied Ottawa recently and have gravitated to the People’s Party of Canada.

If the idea is for the CPC to win the next election, then they’re not going to do that with policies aimed at attracting PPC supporters back into the fold.

Charest is betting that there are still enough disenfranchised progressives in the party freaked out by its Trumpist tack to the right to support him. It may be a long shot. But Peter MacKay’s second-place finish in the 2020 leadership suggests they’re out there.

Charest has also reportedly been working behind the scenes to make himself the consensus choice among party members on the second ballot. And here’s where things get trickery for Poilievre.

Leslyn Lewis, who also declared her intention to run for the leadership this week, muddies Poilievre’s prospects among social conservatives in the party who oppose his stance on LGTBQ issues. Then there’s Patrick Brown.

The former Progressive Conservative Party of Ontario leader and current mayor of Brampton is reportedly planning to announce his candidacy on Sunday. According to the Star, Charest has already struck a deal with Brown that involves throwing their support behind each other depending on who finishes ahead on the first ballot.

The deal creates its own dilemma for Charest in Quebec given Brown’s very public opposition to Quebec’s Bill 21, which prohibits public servants from wearing religious symbols and has been widely viewed as anti-Muslim. Brown recently urged cities across the country to support legal challenges to the bill. Charest told the CBC’s Radio Canada this week that he would respect Quebec jurisdiction on the matter, but that might change, he says, if the case ever ends up at the Supreme Court of Canada.

There is a lot at stake for the CPC. What is it? Who does it represent? These are the questions posed by Charest’s leadership bid.

The party is not going to form a government with MPs who believe vaccines are a bioweapon and the World Economic Forum is bent on the so-called “Great Reset” to impose socialism. Charest knows that. The question is will anybody hear.