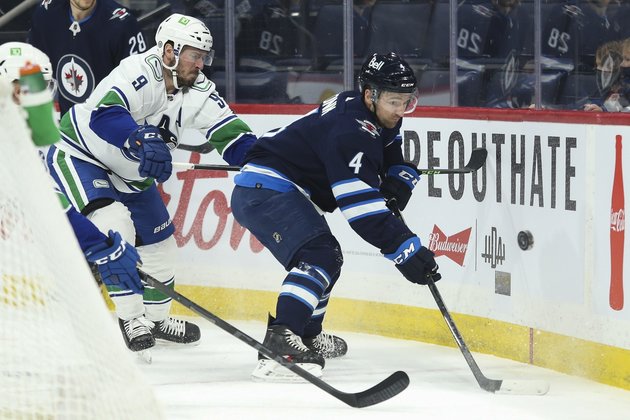 J.T. Miller recorded a natural hat trick less than 33 minutes into the game as the visiting Vancouver Canucks snapped a three-game slide Thursday with a 5-1 victory over the Winnipeg Jets, whose winless stretch reached a season-high six games.

Miller, the team leader with 15 goals, scored once in the first period and twice in the second for his second career hat trick. His first came on March 13, 2018. He also tallied an assist Thursday.

Brock Boeser recorded a goal with two assists, Elias Pettersson had one of each and Luke Schenn added two helpers for the Canucks. Spencer Martin made 33 saves for his first career NHL win at age 26, as Vancouver snapped an 0-1-2 overall rut by winning its third straight on the road and sweeping the three-game season series from the Jets.

Andrew Copp recorded his 12th goal for Winnipeg, which is mired in an 0-4-2 stretch. The Jets also have lost five of their last six at home.

It was an evenly played first period until the Canucks struck first with 6:37 left before the first intermission. On the power play, Boeser delivered a neatly placed pass to Miller, who shot low and hard to beat Jets netminder Connor Hellebuyck (28 saves).

However, a little more than two minutes later, the Jets equalized as Copp batted the puck out of mid-air and by Martin.

Just 5:25 into the second period, Boeser connected with Miller again. In a similar scenario as Miller’s first goal, his shot was potent enough to get the puck by Hellebuyck.

Miller completed his hat trick with 7:05 left in the middle frame. After Martin had made key stops during a Winnipeg shot barrage on the other end of the ice, Miller got the puck back in the Winnipeg zone and successfully went through Hellebuyck’s legs.

The Canucks padded their lead 1:08 into the final period when Miller aided Boeser, who converted through net-front traffic for their second power-play goal of the night. Pettersson’s 11th goal came with six minutes to play.