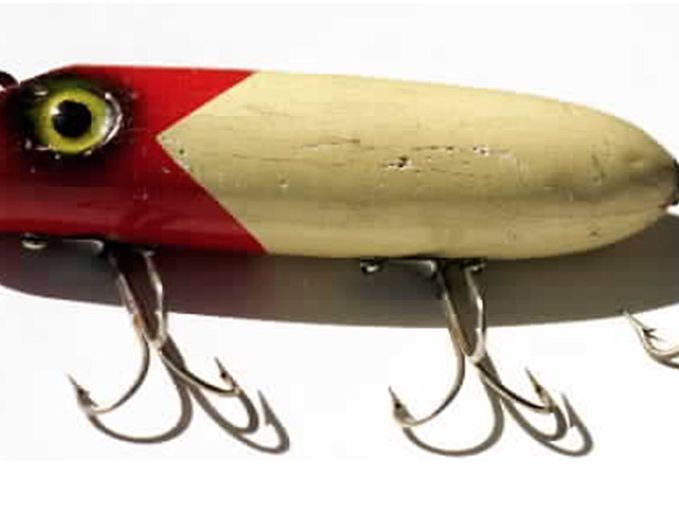 The manufacturer’s slogan from the 1930s and 1940s was tantalizing. “There’s a South Bend Bait for Every Kind of Fish.” South Bend Bait Company’s story is a roller-coaster of management changes, factory relocations and profitable patents. More than a century later, the company’s brand remains in tackle boxes across North America.

Making bucktail fly lures at home in the 1890s, Frank G. Worden opened the Worden Bait Company in South Bend, Ind. Receiving funding in 1905 from a hardware store owner, the fly-maker moved his operation over the hardware store and named it Worden Bucktail Manufacturing Company.

Worden took on partner Jacob Kunz the next year. The owner of the South Bend Dowel Company “became the supplier for the red cedar blanks for Worden’s wooden lures,” The History Museum said. It was an “arrangement that would last, at least, until the 1920s and possibly much longer.” Worden bowed out and the Kunz family took over the tackle company. Manufacturing moved to the dowel company’s site. In 1909, the lure factory’s name changed to the South Bend Bait Company (SBBC). Within a year, four businessmen purchased the company.

The new owners — F.A. Bryan, Malcolm Carrington, Fred Dennis and Burton Oliver — brought fresh ideas in the door. SBBC offered wooden minnows and bucktails, and added rods and reels. “Despite their plans, business was rather poor and the company only had about four employees with sales about $7,300,” the museum noted.

However, the company’s fortunes were about to turn with the hiring of a new manager. Switching from a credit management at Westinghouse Electric Company to manufacturing manager, 28-year-old Ivar Hennings moved from Chicago to South Bend in 1911. Within four years, Hennings and a partner purchased SBBC.

“In 1916, (Hennings) acquired the right to a patent of James Olds of Benton Harbor, Mich.,” the museum mentioned. An avid fisherman, Hennings spent days on the water testing the Bass-Oreno lure. Hennings knew the wooden plug would catch fish … and anglers.

Designed with a notched head, the plug’s shape “caused it to submerge slightly and wobble enticingly when retrieved,” Popular Mechanics editors described in “How to Tempt a Fish: A Complete Guide to Fishing” (Hearst Books, New York 2008/first published 1950). The Bass-Oreno lure was restyled and modernized many times and became “the most popular lure made by South Bend Bait Company.”

Occupying the second floor of an old hotel, a team of 50 SBBC workers — mostly women — produced an abundance of bucktail lures and wooden plugs. Filling bucktail lure demand, the company kept a supply of “about 25,000 deer tails on hand,” the museum said. To display the tackle firm’s product assortment, the first South Bend Bait Company catalogue debuted in 1917.

Apart from Ivar Hennings and bookkeeper Harold Stream, company executives entered and exited in rapid succession. By the early 1920s, the rotation slowed. the business returned to focusing on growth. Purchasing Cross Rod and Tackle Co., SBBC moved the acquisition to South Bend in 1923. The high-quality bamboo rods and steel fishing rods were a boost to the company’s lineup, and the employee count grew to about 400 workers.

Over the decades, SBBC launched dozens of new reel versions and patented their design of anti-backlash reel. An April 1916 Forest and Stream Magazine advertisement stated that the South Bend reel “enables the amateur to cast successfully, on his very first trip — that enables the veteran Angler to do his better work, hour after hour, on any trip.” The reel sold for an affordable $7.50.

Executives also took advantage of intercompany production for other products. For many years, the Shakespeare Company manufactured reels for the Indiana firm, and later, South Bend produced rods for Shakespeare.

In 1930, South Bend moved north to speed up deliveries to Canadian customers. Opening business and sales offices in Toronto and Montreal, the South Bend Bait Company of Canada developed a manufacturing plant in Cobourg. Rather than starting from scratch, the firm used the facilities of H.W. Cooey Machine and Arms Company to produce fishing tackle.

The Canadian branch produced lures, rods and reels, plus other tackle. The venture ended in 1934 when the Canadian fishing tackle division was folded into the American parent company. (The H.W. Cooey company was renowned as a rifle manufacturer.)

While sales numbers remained moderate during the Great Depression and new products were devised, SBBC was still forced to cut employees by about one-third; the remaining workers’ hours were reduced as well. Employees joined the United Furniture Workers Union and held two strikes in 1937 over working conditions and pay.

Once again, a shuffle in the executive offices disrupted business. This time, the innovative Ivar Hennings was appointed chairman of the board. He and three other executives — William Leusch, Heyward Gibson, plus Harold Stream (bookkeeper-now-president and treasurer) — were respected and well liked by workers. “Like Hennings,” the museum said, “most of these officers were active fishermen and involved in conservation groups.”

Demand for fishing gear soared after the Second World War, enabling South Bend to expand manufacturing to several locations. The company’s bamboo fly rods were an ongoing profit-maker, and they also investigated fibreglass rods. Most production was moved to plants in Iowa, and by 1950 the Indiana factory manufactured only bamboo rods.

That same year, Hennings died suddenly. An executive shakeup carried Stream to the top as chairman of the board in 1954. A member of the company board since her wedding to Hennings in 1928, Helen Fisher Hennings was appointed corporate secretary. (Her role was possibly in governance, to ensure compliance with regulations and laws.) Several other managers arrived, but they were number crunchers, not fishermen.

The second half of the 20th century brought new consumer attitudes and calls for invention. Customers turned from casting reels and toward spinning models. Anglers were interested in sleek fibreglass rods rather than classic bamboo. Modernization involved a slight name change, to South Bend Tackle Company (SBTC).

Providing affordable gear, the new spin cast reels in 1955 were priced from $13.50 to $27.50. The three-and-a-half-inch Bass-Oreno cedar plug with the choice of colourful enamel finish and three No. 1 treble hooks cost $10.20 per dozen … only 85 cents each. The smaller two-and-three-quarter-inch Babe-Oreno was similarly priced at $10.20 per dozen in 1952.

Struggling under management who understood money but not fishing, SBTC was sold to Benjamin and Seymour Fohrman. The brothers from Chicago had interests in several other businesses in the Indiana city. Moving head office to Chicago, the Fohrmans also opened a subsidiary in that city. However, by the early 1960s, the businessmen gave up on directing SBTC. Harold Stream was reappointed chairman of the board and production moved from Iowa back to South Bend, Ind.

While subcontracting a portion of SBTC’s own manufacturing to other companies, “South Bend also made many private label products (for Sears and Montgomery Ward) and some items for competitors,” the museum indicated.

Ownership instability continued and South Bend was sold in 1964. Gladding merged a handful of smaller firms into the SBTC and stamped “Gladding South Bend” on products. The once-profitable manufacturer’s sales slumped, and the South Bend plant closed. Ninety workers were laid off.

Selling fishing rods until the mid-1970s, Gladding drew the curtains on the once-popular South Bend. The Lhur-Jensen tackle company briefly kept the company name alive by producing the wooden plugs. Entrepreneurs based in Chicago have since revived the company brand. A wide selection of South Bend tackle is once again on store shelves across Canada and the U.S. Most of the products are made overseas.

Susanna McLeod is a writer living in Kingston.