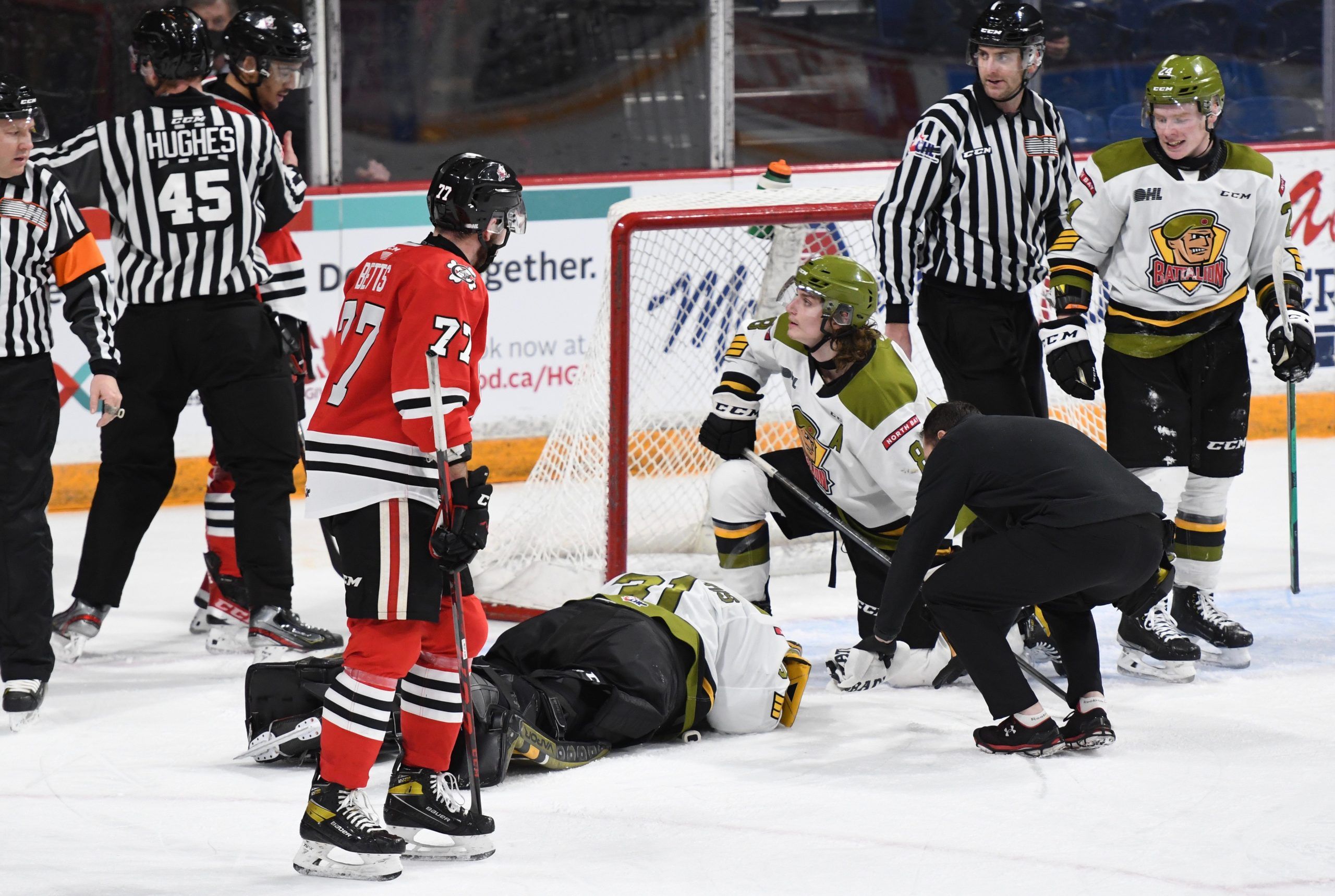 ST. CATHARINES, Ont. — Anthony Agostinelli, Liam Van Loon and Brice Cooke scored in a six-round shootout to give the Niagara IceDogs a 3-2 victory over the North Bay Battalion in an Ontario Hockey League game Tuesday night.

Danil Gushchin, later banished for a check to the head of Battalion starting goaltender Dom DiVincentiis, and Agostinelli scored second-period goals for Niagara, while goaltender Josh Rosenzweig faced 35 shots in a game rescheduled from Dec. 18, when the IceDogs were beset by covid cases.

Owen Van Steensel and Mitchell Russell scored for the Battalion, with DiVincentiis allowing two goals on 20 shots before Gushchin put the shoulder into the goaltender at 19:12 of the second period. Gushchin received a major penalty and a game misconduct, and Joe Vrbetic entered in relief, facing 10 shots through overtime.

The hosts behaved as though they’d scored at 4:38 of overtime, with coach Billy Burke sending his charges to the dressing room after Brenden Sirizzotti put the puck across the goal line from a scramble, but video review showed that Niagara’s Dakota Betts had knocked the net loose. The IceDogs were summoned back to the bowl of the empty Meridian Centre.

In the shootout, Rodwin Dionicio, Sirizzotti and Pano Fimis failed to score for Niagara on the first three attempts. For the Troops, Michael Podolioukh, Van Steensel and Russell were denied before Brandon Coe and Ty Nelson connected and Nikita Tarasevich was unable to get off a shot, ending it.

Niagara, which trailed 1-0 after 20 minutes, tied it 1:50 into the second frame when Isaac Enright’s shot from high on the left side struck Gushchin in the midsection and trickled inside the right post. Gushchin received credit for his team-leading 23rd goal of the season, with the other assist going to Fimis.

Russell replied 1:11 later, driving off the right wing to the slot and almost losing possession of the puck before rifling it home for his 21st goal. Nic Sima and Avery Winslow drew assists.

Van Steensel struck for his fourth goal at 3:48 of the opening period. Off a right-wing faceoff, Nelson slipped the puck to Coe for an initial shot before Van Steensel seized the rebound and beat Rosenzweig with a wrister from a sharp angle to the goaltender’s left.

Russell and Christian Stevens posed rapid-fire threats in the sixth minute, and Coe moved in alone on the net during Battalion pressure in the 17th, but Rosenzweig, who made 13 saves in the period, was up to the challenge.

The Battalion plays host to the Mississauga Steelheads at 7 p.m. Thursday.

BATTALION BULLETS: It was the teams’ fourth of eight games, with the Battalion having posted a record of 2-0-2. Their next meeting is scheduled Feb. 10 at Memorial Gardens … Niagara’s previous home game was a 5-4 win Jan. 8 over the Sudbury Wolves. Since then, the IceDogs have gone 0-2-1 on the road with four postponements, including three home dates … In four games against Niagara, Coe has five goals and six assists for 11 points … The Battalion went 0-for-1 on the power play. Niagara was 0-for-2 … The Battalion, which dressed 11 forwards and seven defencemen, was without Liam Arnsby, Kyle McDonald, Matvey Petrov and Kyle Jackson … McDonald completed a four-game suspension handed down after he drew a major and game misconduct for a check from behind Jan. 16 against the visiting Barrie Colts … Stevens of the junior A Haliburton County Huskies played a 10th game with the Troops this season, while Rodion Tatarenko was recalled from the affiliated junior A Powassan Voodoos for a seventh game … Gushchin has an eight-game points streak in which he has eight goals and five assists for 13 points … Fimis has an eight-game points streak in which he has one goal and eight assists for nine points … Mike Marley and Jesse Wilmot were the referees.