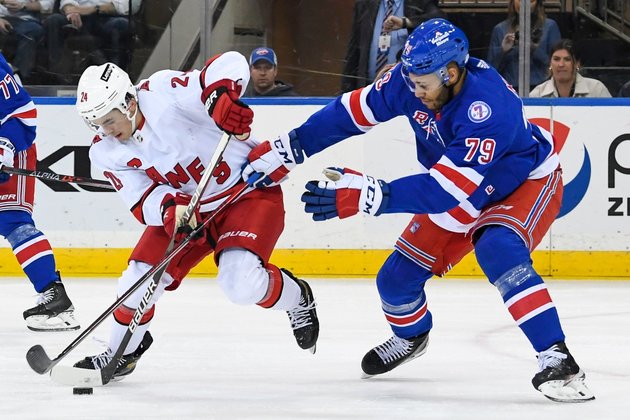 Seth Jarvis scored 1:02 into the third period to break a tie and the Carolina Hurricanes went on to a 4-2 victory against the host New York Rangers in a battle between the top teams in the Metropolitan Division on Tuesday night.

Quinn Hughes backhanded in a rebound 51 seconds into overtime to give Vancouver a win over visiting Vegas.

Andrew Mangiapane and Noah Hanifin also scored for the Pacific Division-leading Flames. Dan Vladar stopped seven shots he faced after coming in for the third period to collect the win. Starter Jacob Markstrom was pulled after allowing three goals on 15 shots.

Blake Lizotte scored twice and Phillip Danault had a goal and an assist as Los Angeles snapped a three-game losing streak with a victory in Chicago.

Los Angeles (39-26-10, 88 points) moved within two points of the Edmonton Oilers for second place in the Pacific Division while sending the Blackhawks to their eighth straight defeat (0-6-2).

Kings goaltender Jonathan Quick stopped 18 of 20 shots to earn the 354th win of his career and move into 21st place on the all-time NHL list, snapping a tie with Evgeni Nabokov and Rogie Vachon.

Tomas Tatar and Jesper Boqvist also scored for the Devils, and Nico Daws made 19 saves for his team-leading 10th win of the season.

Nick Schmaltz and Travis Boyd scored for the Coyotes, who lost a fourth consecutive game and fell for the 11th time in 13 games. Karel Vejmelka made 31 saves.

Kevin Fiala and Ryan Hartman both scored twice to pace Minnesota to a decisive victory over Edmonton in Saint Paul, Minn.

Frederick Gaudreau also scored for the Wild (45-21-6, 96 points), who have won two straight and maintained their hold on second place in the Central Division. Cam Talbot made 27 saves and Kirill Kaprizov collected two assists for Minnesota, which has a 9-0-1 mark in its past 10 home dates.

Leon Draisaitl notched his 51st goal of the season and Mikko Koskinen stopped 18 shots for the Oilers (42-26-6, 90 points), who hold second place in the Pacific Division.

Ryan Johansen scored at 3:18 of overtime as Nashville shut out visiting San Jose.

Johansen sent a pass from along the goal line to the front of the net, where teammate Mattias Ekholm was waiting, but the puck was ruled to have gone in off a San Jose defender. Juuse Saros made 25 saves for the Predators (42-26-5, 89 points), who won their second straight and hold the top Western Conference wild-card position.

Ilya Sorokin made 43 saves and Kyle Palmieri scored the only goal of a shootout as host New York beat Pittsburgh.

Zach Parise and Josh Bailey each scored twice during regulation for the Islanders (34-29-9, 77 points), who kept their slim playoff chances alive with their sixth win in the past eight games.

Jake Guentzel had two goals and an assist for the Penguins (42-22-11, 95 points), who could have clinched a playoff berth with a regulation win. Sidney Crosby and Rickard Rakell each had two assists, and Jeff Carter and Danton Heinen scored for Pittsburgh, which is 1-4-1 in its past six games.

Tim Stutzle had two empty-net goals and an assist to lead Ottawa to a win in Detroit.

Austin Watson added a goal and an assist and Drake Batherson also scored for Ottawa, which snapped a three-game losing streak and swept the three-game season series with the Red Wings. Anton Forsberg made 24 saves for the victory.

Tyler Bertuzzi scored the lone goal for Detroit, while Thomas Greiss stopped 28 shots. The Red Wings have won just twice in their past 10 games (2-5-3).

Lars Eller scored two goals for Washington, which blew out visiting Philadelphia with a goal tally that was the Capitals’ best since 2008.

Alex Ovechkin, Conor Sheary, Garnet Hathaway, Matt Irwin and Johan Larsson each had a goal and an assist for the Capitals, who have won four in a row. Justin Schultz had three assists, and Ilya Samsonov made 19 saves.

James van Riemsdyk scored both Philadelphia goals, and Carter Hart stopped seven of 10 shots before he was replaced by Martin Jones because of a lower-body injury. Jones made 21 saves for the Flyers, who have lost three of four.

Jonathan Huberdeau scored with 1:19 left in overtime vs. Anaheim after Anthony Duclair had scored twice and host Florida tied its best streak of the season with its eighth straight win.

On the game-winner, Huberdeau stole the puck in the Ducks’ zone and scored on his rebound for his 28th goal of the season. The Panthers (52-15-6) lead the Eastern Conference with a franchise-record 110 points.

Despite the loss, Ducks goalie John Gibson was sensational with a career-high 53 saves. Anaheim got goals from Troy Terry and Derek Grant. For Terry, it was his team-high 33rd goal of the season. Grant also had an assist.

David Perron and former Bruins defenseman Torey Krug both had a goal and an assist, while Pavel Buchnevich dished out two helpers for St. Louis, which is unbeaten in nine straight games. Ville Husso made 39 saves to move his personal unbeaten streak to eight games.

Boston’s Patrice Bergeron and Marc McLaughlin scored the final two goals of the first period. Jeremy Swayman stopped 26 shots in the loss, the second straight and third in four games for Boston.

Rasmus Dahlin and Rasmus Asplund each had a goal and an assist and visiting Buffalo defeated Toronto.

Kyle Okposo, Tage Thompson and Jeff Skinner also scored for the Sabres, who took the season series from the Maple Leafs, 3-1. Alex Tuch and Victor Olofsson each added two assists as Buffalo completed a four-game road trip with one win and three losses. Craig Anderson made 24 saves for the Sabres.

Roope Hintz scored with 4:50 left to lift host Dallas to a win over Tampa Bay.

Scott Wedgewood made 25 saves for Dallas in his first shutout since March 7, 2021, when he led the New Jersey Devils to a 1-0 win over the Boston Bruins. The Stars pulled within a point of the Nashville Predators for the first Western Conference wild-card position. Dallas is 3-1-1 in the past five games.

Andrei Vasilevskiy had 28 saves for the Lightning, who missed a chance to clinch a Stanley Cup playoff spot by losing for the fifth time in the past six games.