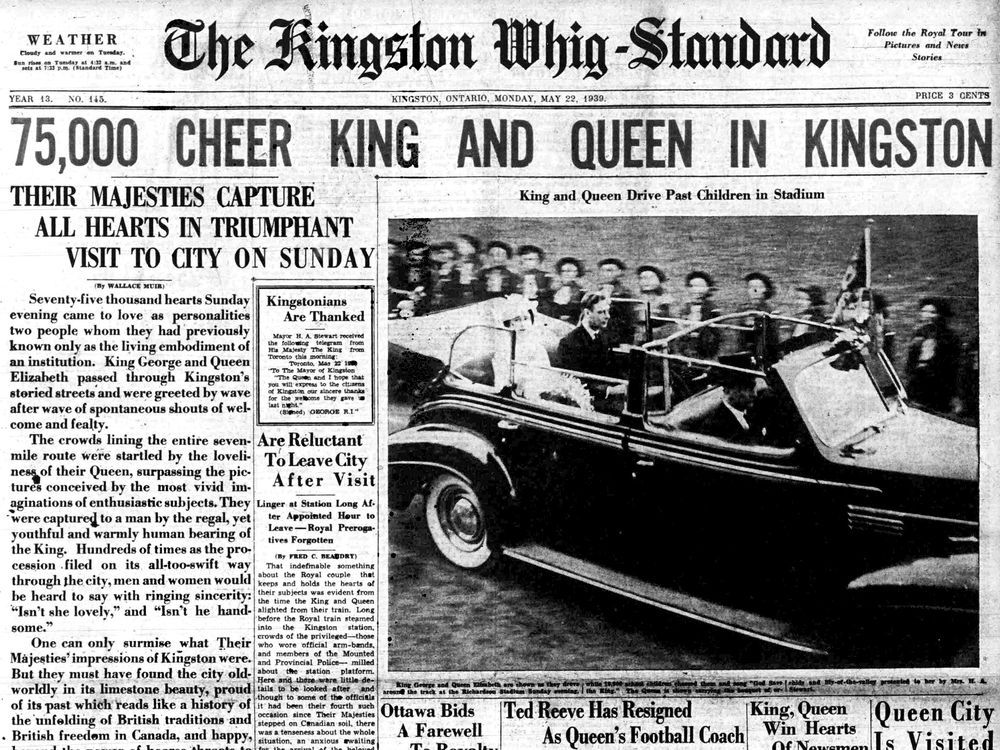 On Thursdays, we present in this space a week’s worth of randomly selected single pages from editions of The Kingston Whig-Standard, The Whig-Standard or The Daily British Whig from our vast digital archives, which reach back as far as 1834.

It could be the front page or any page from inside any edition, but we will focus mainly on the 20th century as the digital editions of newspapers older than that are often unreadable.

We also offer you, our readers, an opportunity to select a page from the past that you would like to see reproduced. Just email us at tgordanier@postmedia.com and we will see if we can accommodate your request once that date rolls around.

If you have a connection to, or a comment about, any of the stories on these historical pages, we would like to hear from you via the same email address as above.

This instalment covers the period of May 19-25.

Click here to view a readable copy of page 11 of the May 19, 1949, edition of The Kingston Whig-Standard.

Of interest: City Park may become the site of the International Hockey Hall of Fame. Until yesterday, a location beside the $500,000 memorial recreation centre at the Fair Grounds was the most likely spot; however, a visit by two architects from Montreal and Clarence Campbell, NHL president and chairman of the hockey hall’s board of governors, resulted in a marked change of opinion among the Kingston committee’s members. Purpose of the visit … was to examine potential sites of the shrine … with a view to a possible future design competition.

Click here to view a readable copy of page 2 of the May 20, 1907, edition of The Daily British Whig.

Of interest: Oscar Nuttall, a Princess Street blacksmith, and Angus McDonald, a well-known sailor, are puzzling their brains to know how they escaped a horrible death by being run over by a train. Their escape was a miraculous one. Early Sunday, as the suburban train was coming in from the junction, they were walking along the track, near the foot of Brock Street. … They sat down on the track … and did not notice the train until it was almost upon them. McDonald got away … but Nuttall, who was under the influence of alcohol, was struck by the slow-moving train and was pushed off the track.

Click here to view a readable copy of page 11 of the May 21, 1996, edition of The Kingston Whig-Standard.

Of interest: A more dramatic script would have been hard to write. A power failure, caused by a thunderstorm, resulted in city officials planning last-minute details for sesquicentennial celebrations by candlelight and oil lamp — muck like city fathers worked 150 years ago. And just like Hollywood, the script also had a happy ending as the power was restored less than an hour before the 11:30 a.m. ceremonies — and the sun struggled to break through the low cloud cover. More than 500 people, many carrying camcorders to tape the events for posterity, gathered on Ontario Street to enjoy the pomp and pageantry of events on the steps of City Hall and in Confederation Park.

Click here to view a readable copy of page 1 of the May 22, 1939, edition of The Kingston Whig-Standard.

Of interest: Seventy-five thousand hearts came to love as personalities two people whom they had previously known only as the living embodiment of an institution. King George and Queen Elizabeth passed through Kingston’s storied streets and were greeted by wave after wave of spontaneous shouts of welcome and fealty. The crowds lining the entire seven-mile route were startled by the loveliness of their Queen, surpassing the pictures conceived by the most vivid imaginations of enthusiastic subjects. … Men and women would be heard to say: “Isn’t she lovely,” and “Isn’t he handsome.”

Click here to view a readable copy of page 10 of the May 23, 1963, edition of The Kingston Whig-Standard.

Of interest: Charlie Batty picked a headpin in the final frame and George MacDonald won The Whig-Standard Strikes ’n’ Spares men’s five-pin singles championship at Brock Bowling Lanes. MacDonald rolled a 1,294 five-game series last night to give him a 2,539 total for the 10-game event. Batty was second with 2,505. A strike in the 10th, combined with his ninth-frame strike, would have given Batty the title. If he struck out he would have finished with a 309 and a total of 2,553. Instead he picked a headpin and ended with 261. Frank Dundon rolled 2,409 for third place.

Click here to view a readable copy of page 7 of the May 24, 1956, edition of The Kingston Whig-Standard.

Of interest: This year Canada takes a significant step forward in the development of population and agriculture statistics. On June 1, the Dominion Bureau of Statistics will take the country’s first five-year census on a nationwide scale. Dominion Statistician Herbert Marshall reports that a task force of about 16,000 census-takers will canvass the country to find out the effect of developments in the last five years on the distribution of the population. Appointed census commissioner for the federal riding of Kingston has been Mrs. Marion McKenna of 27 Princess St.

Of interest: There were times when he didn’t know if he was going to live or die, but Bob Tysen overcame all the obstacles. He ran the gruelling 320 kilometres of the Rideau Trail from Ottawa to Kingston during the long weekend and managed to stay in one piece. The Kingston resident, 27, left Ottawa on Saturday and arrived in Kingston late Tuesday afternoon. Forty friends and fans doused him in champagne at the conclusion of the marathon trek, and the Rideau Trail Association presented him with a certificate to honor his achievement. It took three days, 11 hours, 31 minutes.