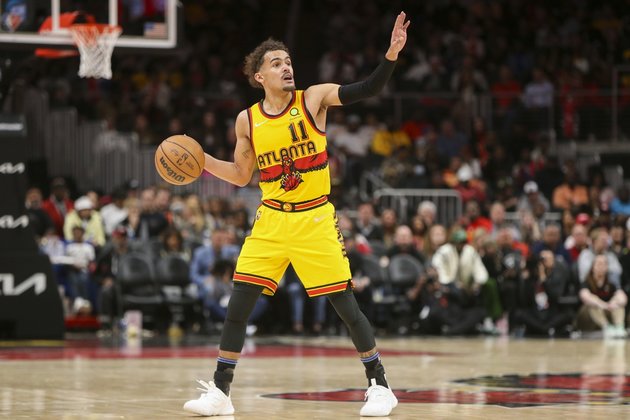 As the Atlanta Hawks push to improve their spot in the play-in tournament, Trae Young is leading the way.

That’s no surprise, given that Young has averaged more than 25 points and nine assists per game over his first four NBA seasons.

Heading into Wednesday’s game against the Thunder in Oklahoma City, Young is averaging 15.5 assists over the past two games.

He had a season-high 16 assists in Monday’s win at Indiana after tying his season high with 15 in the Hawks’ previous game, a win over Golden State.

Even with the Pacers trapping him, Young kept finding open teammates.

“I always appreciate Trae,” Hawks guard Bogdan Bogdanovic said. “We need other teams to keep trapping him, so I can get wide-open shots. I know he’s going to keep finding me.”

While Young has been a consistent contributor for the Hawks (38-37), Jalen Johnson has bounced in and out of the rotation.

The rookie is coming off a season-high 12-point game against Indiana in a game that put Atlanta over .500 for the first time since early December.

“Jalen is playing hard and rebounding,” Young said. “It’s a tough situation not knowing if you are going to play.

“He’s a smart player and can dribble a little bit. He can do a lot of things for us.”

Atlanta comes into Wednesday’s game in 10th place in the Eastern Conference, a half-game back of Charlotte for ninth.

The Thunder’s lineup against the Hawks this time around will be much different from the one that lost the earlier meeting.

Eight of the 12 players who played for Oklahoma City in that game are injured or no longer with the Thunder, with seven of those missing at least the past month.

Darius Bazley was the latest addition to Oklahoma City’s long injury list. Bazley was ruled out for the season with a non-displaced tibial plateau fracture in his right knee prior to the Thunder’s game in Portland on Monday.

Oklahoma City beat the Trail Blazers in overtime for their second win in three games.

The Thunder scored a season-high 134 points despite all five of their players who average at least 10 points per game being injured.

“With the amount of talent that we have out, nobody’s counting on us to win any games,” said Isaiah Roby, who scored a career-high 30 points against Portland, “The fact that we’re going out competing against playoff teams and we’re winning games like tonight, that’s very encouraging.”

Oklahoma City had just eight players available for that game after the pregame announcement that Bazley and leading scorer Shai Gilgeous-Alexander would miss the rest of the season.

Thunder coach Mark Daigneault said that even though Oklahoma City’s depth was being stretched, the opportunity has benefited the young players who have been healthy.

“It is hard to play when your role is really thin,” Daigneault said. “… It’s nice to be able to give these guys an extended run.”

The Hawks are looking for their first win in Oklahoma City since December 2016.