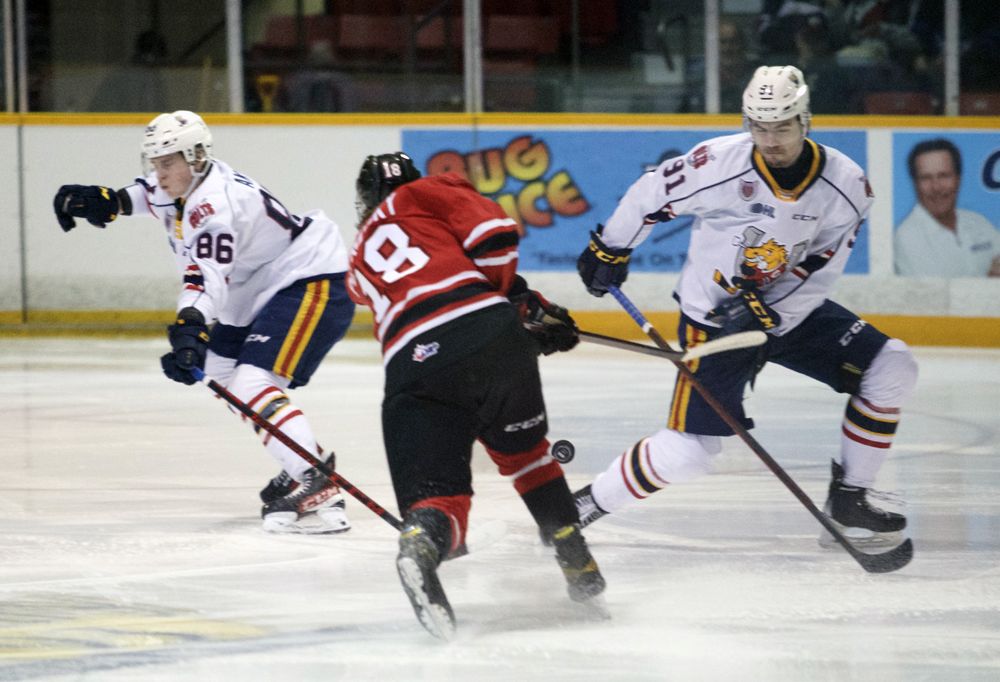 Cedrick Guindon is breaking Owen Sound rookie-record marks set years before he was even born.

Set back when the Attack were still called the Platers.

Back when the sticks had some heft to them.

Owen Sound’s rookie goal record has stood so long it’s been lost to history a little bit, especially with the new generation of players. Guindon didn’t know he broke the record until the post-game interview with Rogers TV’s Adrien Mousseau.

Not bad for the Rockland native selected 10th-overall in the 2020 OHL Priority Selection who missed his “true rookie” season amid the COVID-19 pandemic.

And, like a seasoned veteran, he’s not ready to rest on new-found laurels.

“It feels great, but we need to carry this momentum into the playoffs,” he said. “I think my parents are bigger on it than me. That’s something I feel honoured and everything, but I have to put it behind me and set new goals.”

It only took Guindon three games to hit mesh in the OHL. His first goal came against the Guelph Storm in Owen Sound on Oct. 13. It came against his friend, Storm goaltender Jacob Oster who notched his first OHL win in the same game. And it came in a 7-3 loss late in the third period.

“Probably the worst time to get a goal, while losing with five minutes left, but I just remember having the weight off my shoulders and thinking welcome to the league,” he said. “The other 29, the thanks goes to my linemates and coaches and everyone else.”

With Stepan Machacek and Nick Porco out sick, Greg Walters shuffled the deck and moved Guindon on the wing with veterans Deni Goure and Ethan Burroughs.

On Guindon’s first goal, Goure made a nifty move to drive wide and shovel a backhand pass in front of the net that Guindon was able to get to first. The goal put Owen Sound up 3-0 on the Colts just over a minute into the third period.

Moments later, Goure made a crisp lead pass to spring Guindon on a breakaway and the rookie sniper made no mistake for the record-breaking marker. With all the rookie hype in the Scenic City it’s easy to forget it’s 18-year-old Goure who leads the team in scoring with 62 points.

Rookie Colby Barlow, who is sitting at 29 goals himself, had seven shots on goal Wednesday but was shut out by Colts goalie Matteo Lalama.

“He’s going to get 30 next game,” Guindon said of his teammate. “I guarantee it.”

Before the game became about Cedrick, it was Cedricson Okitundu who was making the biggest splash on the ice.

The rookie defender’s name won’t show up on the scoresheet, but after breaking up a two-on-one in the first period and crashing into the boards he returned from a brief check-up in the locker room to draw two penalties in the second period. One a painful looking high-stick to the face after taking a shot off the leg.

“It’s playoff hockey, right? We need to be willing to sacrifice and it paid off,” Guindon said of his teammate’s blue-collar effort.

Owen Sound’s power play, and specifically Servac Petrovsky, would convert on each opportunity to put Owen Sound up 2-0. The Attack’s power play finished two-for-four on the night.

The goals were Petrovsky’s 26th and 27th of the year as Owen Sound’s other standout offensive rookie is inching closer to the previous Attack record mark for goals himself.

Sam Sedley had three assists in the contest. His second three-assist game of the season and sixth multi-point game. His 40 points, four goals and 36 helpers, are good enough to place inside the OHL’s Top-20 for rear guards.

Nick Chenard was on pace for his fourth shut out of the season until Declan McDonnell’s 27th at the 8:46 mark of the third period spoiled his night. Chenard still made 35 saves on 36 shots.

Lalama made 21 stops on 25 shots as the Colts dropped their sixth-straight game.

With the win, Owen Sound’s drive for five, as in the fifth-spot in the Western Conference, remains alive. The Guelph Storm need only one point in their final two games to secure fifth place and a first-round series with the Sault Ste. Marie Greyhounds. If the Storm drop their remaining two games against Kitchener and Windsor, and Owen Sound beats Kitchener Saturday night in their final game, Owen Sound would hold the tiebreaker and move into the fifth spot.

Should the Attack remain in sixth place, they’ll meet up with the Flint Firebirds in the first round of the playoffs.

The playoff picture will be a lot clearer after Saturday night’s contest when the Owen Sound Attack host the Kitchener Rangers in the final game of the regular season at the Harry Lumley Bayshore Community Centre. Puck drop is set for 7:30 p.m.

Mack Guzda missed his seventh-straight game in Owen Sound Wednesday as he deals with a back injury. The Barrie Colts hope to have him back between the pipes for the playoffs. The Owen Sound Attack had a video tribute for their former goaltender who was in the building. Brandt Clarke was held out of the game after getting hurt Sunday against Peterborough.

Nick Porco and Stepan Machacek missed Wednesday night’s game with an illness. Mark Woolley missed his third-straight game with a leg injury, but Owen Sound expects the captain back for the postseason.

Artur Cholach, the Ontario Hockey League’s only Ukrainian player, is a rearguard for the Barrie Colts. He made his first trip to Owen Sound since Russia invaded Ukraine. Cholach, who is from Lviv in the western part of the country, was selected by the Colts third-overall in the 2021 CHL Import Draft. He was selected by the Vegas Golden Knights in the sixth round of the 2021 NHL Entry Draft.