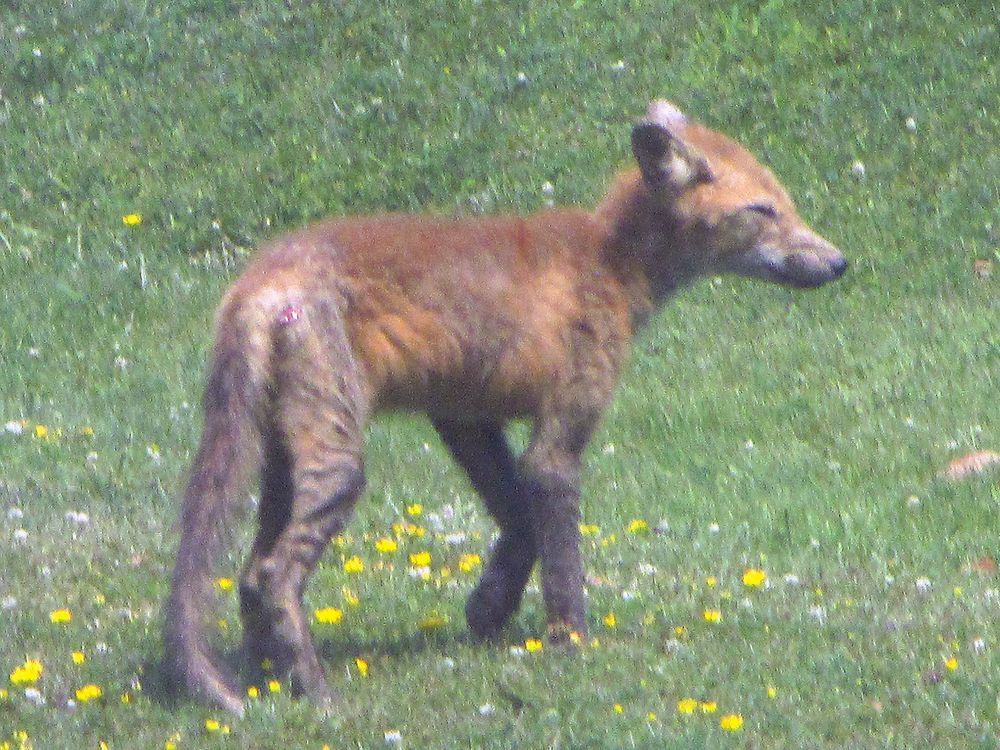 A Gananoque woman who has three foxes, a mother and it two kits, living in a culvert across the street from her home, wants the family to eventually move on but not until she can treat them for mange.

Sheila Knowles, with the help of a neighbour, is feeding the foxes food containing Ivermectin, which will treat a severe case of mange the foxes have contracted. Mange is a skin disease caused by parasitic mites that burrow into an animal’s skin.

The disorder can affect wild and domestic mammals and is often reported in red foxes, coyotes and wolves. It can also affect domestic dogs and cats.

In an interview with the Whig-Standard on Wednesday, Knowles said she has managed to treat the mother fox and noticed that the kits, who are almost full grown, have started to take the medicine.

“There’s a method in my madness,” she said.

In the evenings, she leaves out scrambled and hard-boiled eggs as well as salmon with Ivermectin medicine placed inside with a syringe.

The drug became well known in 2021 after former United States president Donald Trump promoted it as a possible cure for COVID-19.

The drug appears to be working for the Gananoque foxes Knowles is attempting to treat. The mother fox looks better after a few doses, she said.

“Ivermectin treats parasites. I’ve used it for years on dogs I’ve had,” she said.

“I put one egg out and one of the babies came, and then I put another boiled egg with medicine in it, and I think the second baby was the one who came and got it,” she said. “They’re almost full grown; they just look like smaller versions of their mother.

“They look very, very sick,” she said of the kits’ current condition.

“They (the babies) got their hard-boiled eggs on Monday, and I hope to see improvement by the end of the week.”

“What’s most noticeable from a distance is they scratch constantly, and mom is not scratching anymore, so I’m assuming she’s starting to get a little bit better.

“Hopefully the babies get (the eggs), then that’s all they’ll need. I’d say in another week there should be major improvement.”

The mange also causes the foxes to constantly squint.

Her efforts to help the foxes are causing some concern for her neighbours in her quiet Gananoque neighbourhood. Knowles said some neighbours believe the foxes will attack their small pets or young children.

One neighbour believed that the foxes would attack her or her small dog, but Knowles assured her that wouldn’t happen. One of the kits came close to a neighbourhood cat, but the kit ran away from the feline.

As well, her Kingston veterinarian told Knowles that she cannot catch the disease from the animals because she has to have personal contact with the foxes for the mites to transfer onto her. All she does is leave the bowls with the food and medicine in them in the evening and then she picks up the empty bowls the next day, washing them with boiling water and dish detergent.

She doesn’t plan to feed the foxes once the mange in cured.

“Over the course of the next week, I’ll gradually decrease what I give them and then stop completely,” she said. “The people at Sandy Pines (Wildlife Centre in Napanee) assured me that once the parasites are eliminated, they would leave.

“Once they see and can hunt and they’re not getting food from people, they’ll move on. They should be ignored and not be fed unless they’re sick.”