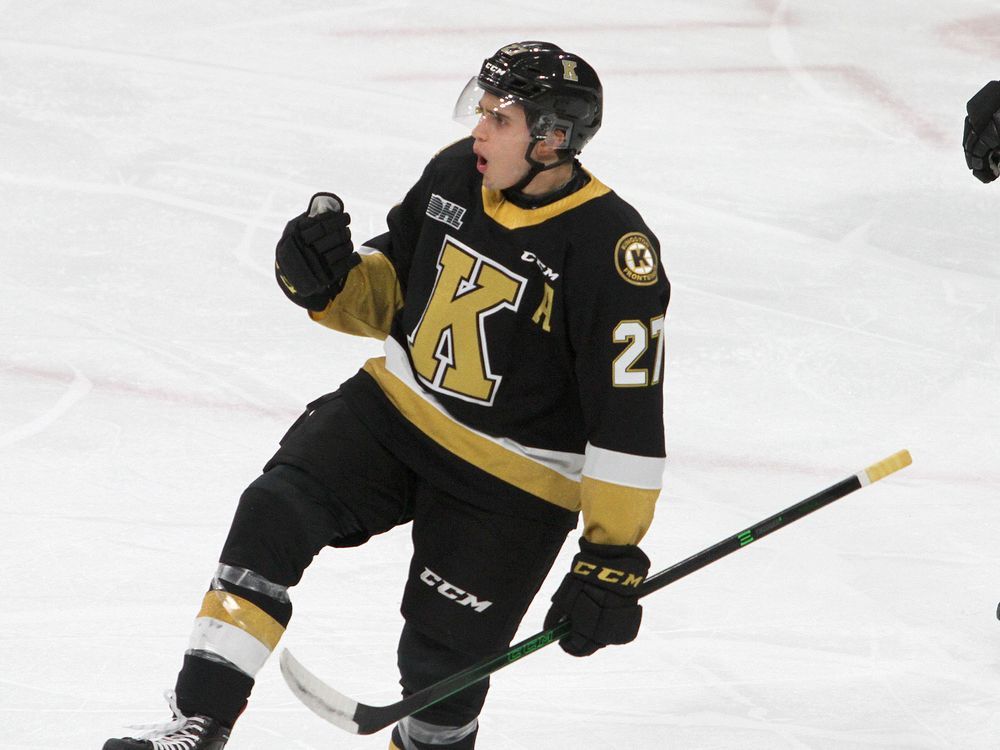 Kingston Frontenacs overage forward Lucas Edmonds scored the game-winning goal at the 8:13 mark of the third period and then added an empty-net insurance goal with 22 seconds remaining to cement a 3-1 Ontario Hockey League road win over the Oshawa Generals on Sunday night.

Edmonds scored the go-ahead goal after linemate Francesco Arcuri made a backhand pass across the crease and Edmonds found himself looking at an open net.

Including the empty-netter, Edmonds now has 26 goals on the season. His 83 points left him sitting in third place in the OHL scoring, two behind leader Wyatt Johnston and one point back of Rory Kerins of the Soo Greyhounds.

Forward Jordan Frasca drew an assist on both of Edmonds’ goals.

On the heels of a 6-2 Friday night win at home, Sunday’s win was Kingston’s 30th of the season, to go along with 14 regulation losses and three overtime losses. With 63 points, the Frontenacs, who have won six of their last eight games, trail the East Division-leading Hamilton Bulldogs by five points.

The Bulldogs won all three of their weekend games, outscoring their opponents by a 21-7 total. Hamilton is tied for the overall OHL lead with the Mississauga Steelheads but has four games in hand.

On Sunday, the Generals, trailing 2-0 at the time, pulled to within one goal with seven minutes remaining when Brett Harrison’s one-timer from the right side beat Kingston goaltender Leevi Merilainen. He was partially screened by defenceman Lucas Peric, who was trying to block the shot.

Kingston defenceman Alec Belanger took a tripping penalty with 3:36 remaining, but Oshawa, which was outshot 40-23 in the game, didn’t get a shot on goal with the man advantage.

The Frontenacs scored first in the game at 9:25 of the second period after Peric’s point shot was picked up behind the Oshawa net by Martin Chromiak, who then banked the puck off the back of Paputsakis and into the net. It was the European import’s 22nd goal of the season.

About 30 seconds later, Generals captain Ty Tullio went in all alone on a breakaway, but Merilainen stopped the close-in shot with his left pad.

With just over three minutes left in the period, Zayde Wisdom, while killing a penalty, stripped the puck from David Jesus at the Kingston blue line and had a  breakaway of his own. However, he was stopped by Paputsakis.

The Frontenacs play in Barrie against the Colts on Thursday before heading north for the second and final time this season with games in Sudbury Friday evening and North Bay Sunday afternoon.