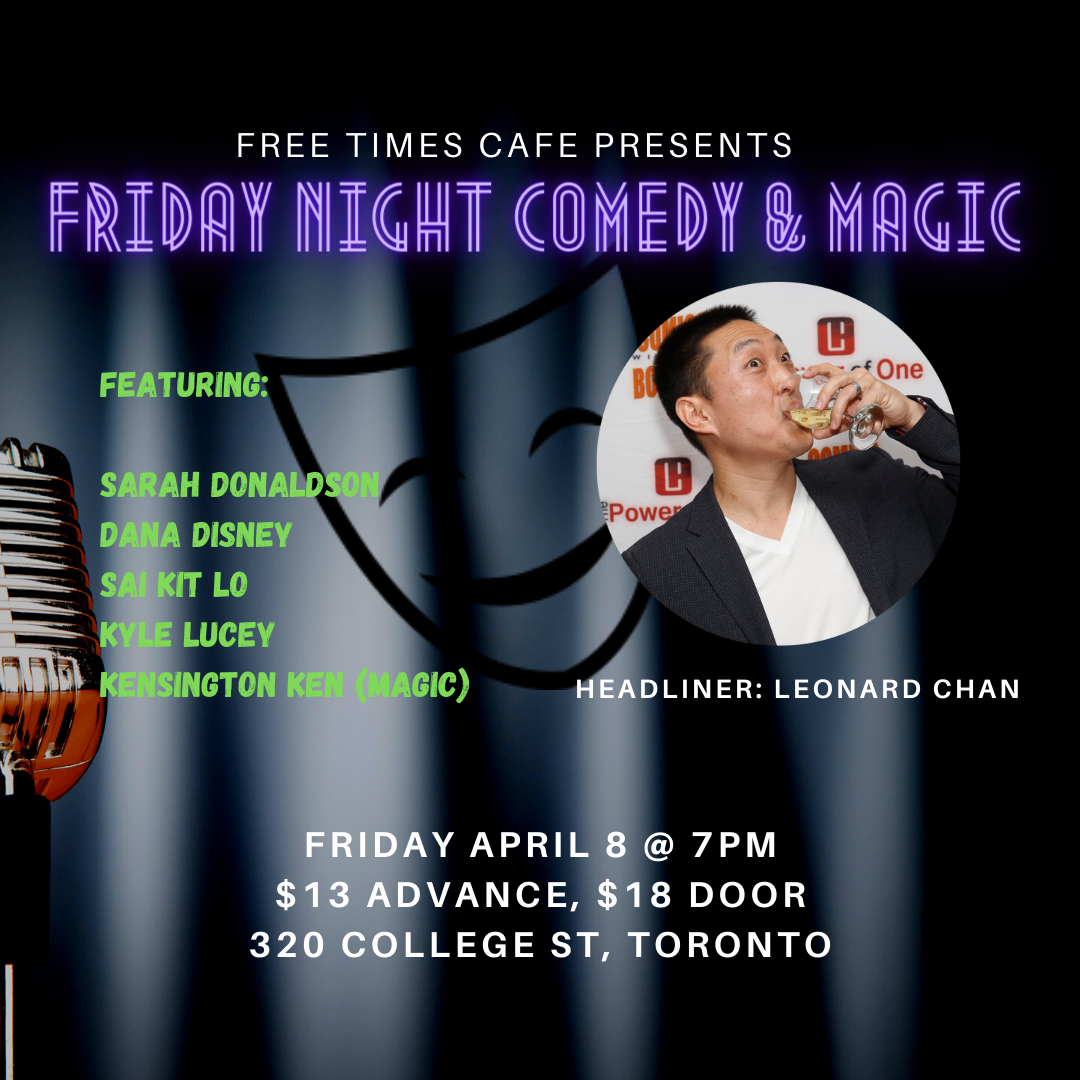 Come join us for a Friday evening of hilarious comedy and amazing magical illusions. This week we have 5 professional comedians for you, including our headliner Leonard Chan. Not only that, Kensington’s own magician will come and amaze you with some of his latest magical illusions and mentalism!

Tickets are just $13 in advance, and $18 at the door. All ticket revenue will go to the performers, thanks to the generosity of Free Times Cafe in hosting us. Thank you for supporting local artists!

You are in for a treat this week. Some of our featured performers are:

Leonard Chan (featured headliner): Leonard started doing comedy in grade school to impress a girl, and hasn’t looked back since! He’s opened for Ronny Chieng, Joel Kim Booster, K. Trevor Wilson, Rhea Butcher, and Matt Braunger. You may have heard him on Sirius/XM and CBC radio, or saw him at the Halifax Comedy Festival, Winnipeg Comedy Festival, or Just For Laughs in Montreal. A true established professional, and we looking forward to seeing him hit our stage!

Sarah Donaldson: A veteran in the Toronto comedy scene, Sarah’s comedic style is one that is one of a kind. She mixes dry sarcasm, with a dash of dirty, and a whole lot of sass. Get ready to laugh, cry, and cheer, all at the same time!

Kyle Lucey: Winner of the Durham Comedy Festival, Kyle is the perfect mix of dark and goofy. He’s been featured on Sirius XM and MTV, all while being one of the youngest comedians to be signed by Yuk Yuk’s. We don’t have enough space here to list all his accolades, so you’ll just have to come see him for yourself.

Dana Disney: A fast rising comic that has been lighting up stages across the GTA. She’s performered at packed venues such as Film Cafe, TacoTaco Main Stage, and Dungeon Comedy. Don’t let her innocence fool you, she’s one hilariously clever comic!

Sai Kit Lo: He is the self-proclaimed funniest Asian comic in Canada. Is there any truth to this? You be the judge!

Kensington Ken (Magician): Our resident magician, Ken has over 60k followers on TikTok and well over 10 million video views. Magic in real life is way tougher than on the internet, so expect lots of bloopers, laughter, and even miracles!