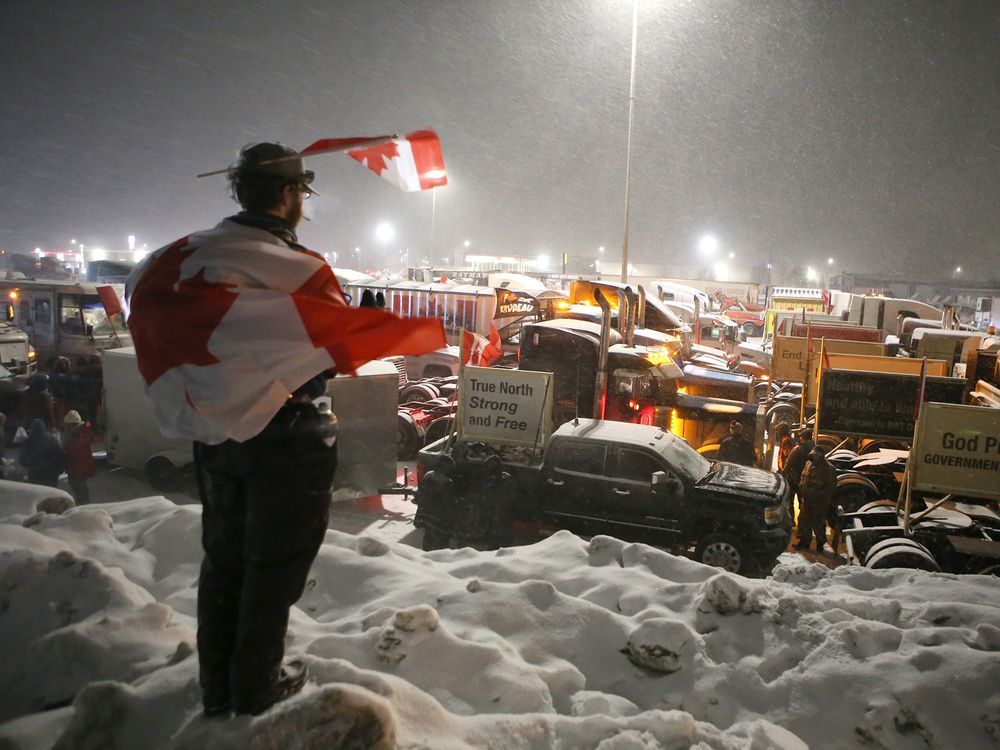 Countless big rigs from across Canada clogged Highway 401 on Thursday as they passed through the region on their way to Ottawa.

While they no doubt have caused delays for motorists, the unexpected number of those wishing to participate from the local region have delayed the convoy itself.

“They’re shooting for 5 o’clock, but I would really think they’re going to be late … it has grown so much,” Tracy Henderson explained. Henderson is a spokesperson from Canadian Unity, one of the main organizers of the Freedom Convoy.

Henderson explained that local farmers and truckers will be adding their support to the convoy but stressed that the event is meant to be a peaceful demonstration.

“We’re going to have truckers from Napanee, Odessa, Kingston, Joyceville. I have heard of two farms that have brought in bulldozers to get rid of the snow and make room for the transports to park. So it’s going to be big,” Henderson said. “Our whole objective is to go down there peacefully and move forward from there.”

Earlier in the day, truckers at the former 10-Acre Truck Stop gas station near Highway 401 said they hope to complete their work before the convoy arrives. They anticipate large delays alongside the arrival of their fellow transporters.

Kingston Police closed Gardiners Road and Highway 38 near Highway 401 at about 5 p.m. Thursday. They said in a news release the decision was to try to minimize the interruption to the city and to ensure traffic safety.

“While not condoning or approving of the convoy, Kingston Police is working in conjunction with the Ontario Provincial Police, Kingston Fire and Rescue, Frontenac Paramedic Services and various departments with the City of Kingston to reduce any impact on the Kingston community and surrounding area,” police said.

The group of truckers converging on Parliament Hill are doing so in response to new double-vaccine rules for truck drivers that took effect on Jan. 15. Members of the Freedom Convoy have said the mandates will hurt their jobs and industry.

The Canadian Trucking Alliance issued a statement on Saturday condemning the actions of the convoy, saying, “The Canadian Trucking Alliance does not support and strongly disapproves of any protests on public roadways, highways and bridges. CTA believes such actions — especially those that interfere with public safety — are not how disagreements with government policies should be expressed.”

In the statement, the alliance explained that the “vast majority” of the Canadian trucking industry is vaccinated, with the overall industry vaccination rate among truck drivers closely mirroring that of the general public. It also advised that truckers who disagree with the vaccine mandates “can choose to hold an organized, lawful event on Parliament Hill or contact their local MP.”

“The Government of Canada and the United States have now made being vaccinated a requirement to cross the border. This regulation is not changing, so, as an industry, we must adapt and comply with this mandate,” alliance president Stephen Laskowski said in the statement. “The only way to cross the border, in a commercial truck or any other vehicle, is to get vaccinated.”