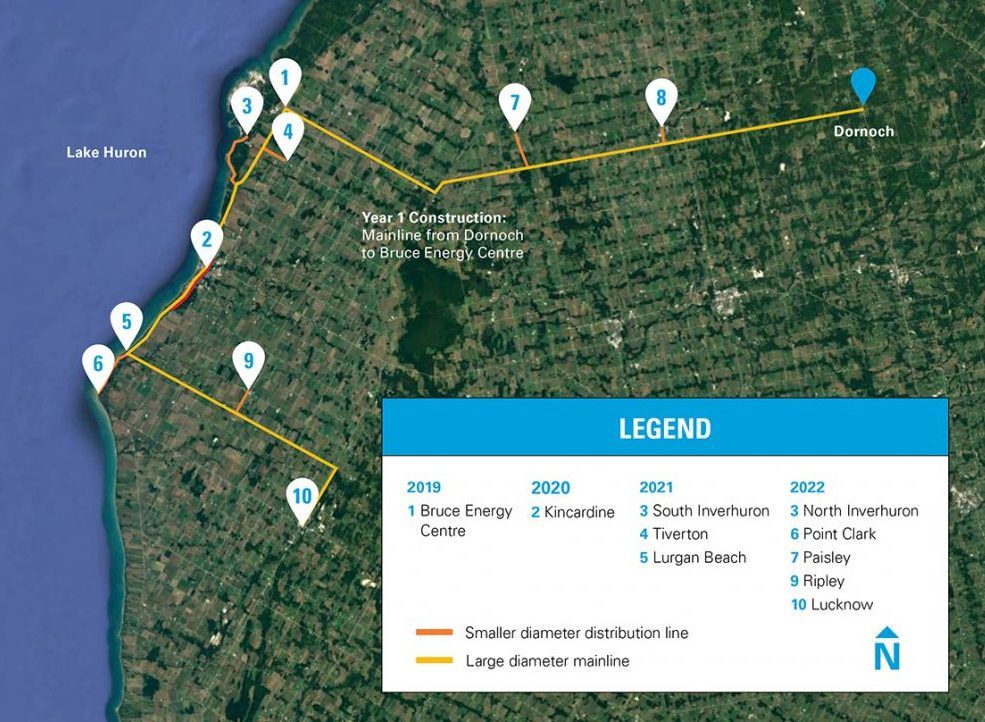 EPCOR is continuing a multi-year project to bring natural gas to a number of communities in southern Bruce County.

Last week, the company announced that construction was recommencing on the service in a number of communities, with work already starting in Inverhuron, Chesley and Point Clark, with Paisley and Lurgan Beach resuming in the coming weeks. Crews will begin working in Kincardine and Lucknow in July and Ripley in August, while residents in Tiverton are expected to see construction taking place in November.

EPCOR has been working with its construction partner AECON since 2019 to install the gas lines in southern Bruce County as part of an $80-million project that includes an approximately 120-kilometre main line from Dornoch to the Bruce Industrial Park near Bruce Power, then down the Lake Huron shore and southeast to Lucknow. Another approximately 178 kilometres of smaller diameter distribution piping was being constructed to serve the communities.

EPCOR spokesperson Laura Ehrkamp said via e-mail on Wednesday that since the distribution system was completed in Kincardine in 2020, more than 2,800 customers have been connected to natural gas service.

“We expect to connect more than 2,000 customers this year in the communities we are serving,” Ehrkamp wrote. “The distribution system has the capability to serve as many customers in our service territory who sign up to use safe, affordable natural gas service.”

Ehrkamp said the timing of the installation dates, which are the final steps before natural gas service can begin, are subject to change due to factors affecting construction, such as weather conditions. If all goes as planned the full system is expected to be in service by early next year. More information on installations is available online at epcor.com/sbconstruction.

In its news release issued last week, EPCOR said it needs to identify other utilities located along the public utilities corridor in order to safely build the natural gas network and maintain the reliability of other utilities.

With many properties having landscaping or driveways that extend into the corridor were EPCOR is doing the work, it may result in driveways, sidewalks or landscaping being disturbed to expose underground utilities. All areas affected by construction will be restored, it said in a news release.

“The xecion on both the public and private side thare are disturbed, as well as impacted streets, alleys and sidewalks will be fully restored once construction is complete and at the appropriate time in the growing season,” EPCOR’s Vice President of the Ontario Region, Susannah Robinson, said in the release. “We greatly appreciate  the community’s support and patience as we bring natural gas to residents and business owners in the region.”

Those who have underground systems such as sprinklers, irrigation systems, invisible dog fences or septic systems are asked to contact EPCOR as they can be damaged during construction.

Utility locating flags, stakes and spray paint must stay in place until the work is completed, helping to prevent telecommunication, power or water service disruptions or injury to construction crews or the public, the release said.

Residents and businesses are also reminded that all buried utilities, including gas lines, must be located by Ontario One Call before digging or disturbing the ground. While natural gas lines are typically buried at a minimum of 18 inches, excavating just 12 inches below the surface can result in a line being struck. Ontario legislation holds anyone causing damage to underground infrastructure liable, the release said.

“We ask residents to take a few small steps, such as notifying EPCOR of underground systems on their property, staying safe around construction areas and contacting Ontario One Call before digging in their yards,” Robinson said in the release. “This helps ensure the safety of their families, our crew and everyone in the community.”