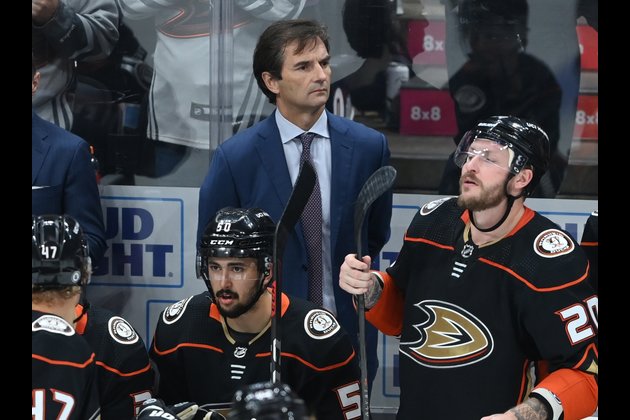 Isac Lundestrom had two goals and an assist to help the Anaheim Ducks end an 11-game losing streak with a 5-0 win against the Arizona Coyotes on Friday night in Glendale, Ariz.

Anthony Stolarz made 22 saves for his third shutout in his 18th start for Anaheim this season.

Cam Fowler had a goal and an assist, Trevor Zegras scored another lacrosse-style goal, Gerry Mayhew contributed a goal and Troy Terry had two assists for the Ducks (28-30-12, 68 points), who were 0-8-3 in their previous 11 games.

Karel Vejmelka gave up three goals on nine shots before he was replaced by Josef Korenar, who made 26 saves for Arizona (21-42-5, 47 points). The Coyotes have lost seven of their past eight games (1-6-1).

Lundestrom gave the Ducks a 1-0 lead at 3:38 of the first period. Terry spotted Lundestrom entering the Arizona zone with room and passed him the puck. Lundestrom then scored with a wrist shot from the slot.

Mayhew made it 2-0 at 7:41 of the first when he entered the zone with speed and scored on a wrist shot from the right circle. It was his second goal since he was acquired off waivers from the Philadelphia Flyers on March 20.

Zegras scored his second lacrosse-style goal of the season at 9:42 of the first period to stretch the lead to 3-0 and end Vejmelka’s night early for the second time in his past three starts.

Zegras brought the puck behind the Arizona net with speed, lifted it with his stick blade and sent the puck high into the net with a backhand flip as teammate Sonny Milano provided a screen at the near post.

Fowler scored off a rush during four-on-four play for a 4-0 lead at 5:44 of the second period.

Lundestrom scored his second goal of the game and 16th of the season off a loose puck from in close at 7:25 of the third.

Terry left the ice with a towel to his face after getting into a fight with Jay Beagle with 5:37 remaining. The Ducks ended the game on a five-minute power play.