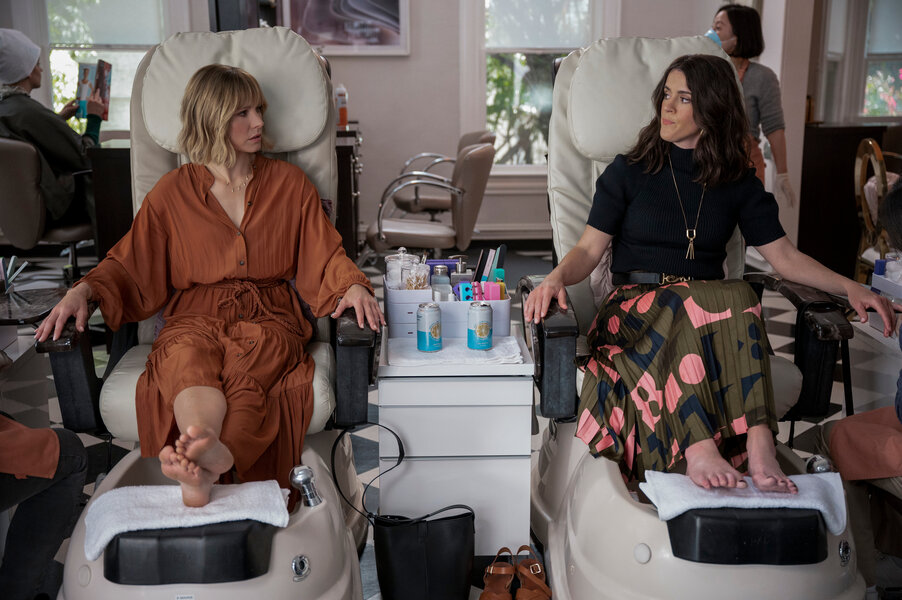 The new Netflix comedy traps Kristen Bell in a shiny, dull parody of movies like The Girl On The Train and The Woman In The Window

Kristen Bell and Mary Holland in their one great scene together.

THE WOMAN IN THE HOUSE ACROSS THE STREET FROM THE GIRL IN THE WINDOW (Rachel Ramras, Hugh Davidson, Larry Dorf). All eight episodes available to stream on Netflix Canada Friday (January 28). Rating: N

The title tells you the whole thing, really. With its just-slightly-blurred title treatment and its haunting version of a familiar song, The Woman In The House Across The Street From The Girl In The Window sets itself up as a spoof of those paranoid-white-lady thrillers that were briefly popular a few years back.

(They’re all just reworkings of Rear Window and Vertigo, with an unreliable narrator who stumbles into an elaborate mystery, can’t get anyone to believe her and must overcome her own past trauma to get to the truth and save the day. This isn’t a condemnation of the genre: sometimes these stories can be a lot of fun. Gone Girl flipped the whole thing on its head, and it was pretty great.)

Anyway, this one stars Kristen Bell stars as Anna, an alcoholic divorcée haunted by the death of her young daughter, which has left her with a curious psychological condition: if she goes out in the rain, she passes out.

When handsome widower Neil (Tom Riley) moves in across the street with his own little girl (Samsara Yett), Anna is drawn to them – only to see Neil’s girlfriend Lisa (Shelley Hennig) murdered one stormy night.

But no one believes her: Neil denies anything has happened, the police can find no evidence of a crime, and as Anna tries to figure out what’s going on, bodies start to pile up as quickly as empty wine bottles.

Sounds like a slam-dunk, right? The Woman In The House Across The Street From The Girl In The Window is an almost remarkable failure of concept and execution: how hard can it be to make fun of paranoid-white-lady thrillers?

With the help of director Michael Lehmann, writer/producers Rachel Ramras, Hugh Davidson and Larry Dorf – a trio of actor-comedians who co-created and starred in the Paramount sitcom Nobodies a couple of years back – perfectly replicate the affluent worlds of recent studio pictures like The Girl On The Train or The Woman In The Window: everything is colour-coordinated and all the appliances are perfectly in place, and all the characters are dressed in the sort of expensive casual wear that speaks to wardrobe designers with J.Crew placement deals.

But they neglect to put the slightest comic spin on the material: entire episodes of this show pass without a single joke, which seems like something somebody should have noticed at some point in the production. But I guess that’s what happens when you inflate a five-minute sketch premise to the length of The Godfather Part II: the handful of gags they had going in are pushed out towards the infinite as everything expands around them.

And when you do run into something truly funny, it pops in a way that makes everything else look bad. In the back half of the series, there’s a scene where Anna and her best friend Sloane (Happiest Season’s Mary Holland) go for a mani-pedi to discuss a couple of dangling plot threads. Like everything else in the show, it goes on far too long, but Bell and Holland make the most of it – just rolling through the scene, making each other laugh without ever breaking character.

For a moment, you can see a livelier, less mannered take on the material that uses the overlong episode order to wonder how real people would deal with finding themselves caught in the plot of an airplane paperback. Of course, that show already exists: it’s called The Flight Attendant, it’s on Crave, and it’s a lot better at all of this foolishness than the show I’m writing about here. Go watch that instead, I’m begging you.