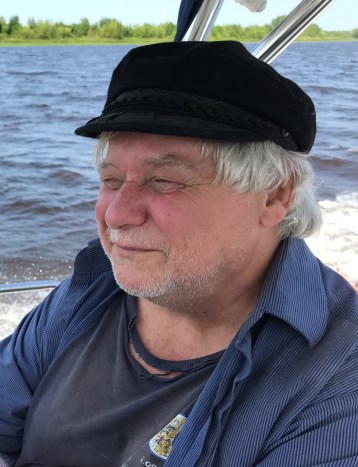 The Captain is sailing new waters. Dominic Besignano aka Besi has passed beyond pain and entered the light.

Born in 1947 to Merchant Marine Frank Besignano and his English bride Cecilia (nee McAlpine), he started life at his grandparents’ East End home. His family later moved to Westfort. His heart remained with the people who he knew there and he remembered them with affection. When the 60s hit, he embraced them with zeal. He travelled extensively through Europe and the Americas, embracing different cultures and customs.

His love of music was well known. For twenty years he was a partner with Marsha Ivall in Harbour Lights Productions, bringing a wide array of musicians ranging from punk to jazz to the city, starting with the first Blues Festival in 1982. He loved all music especially blues and reggae but also embraced country, zydeco and jazz.

Dom was an avid reader, enjoying health, politics and the occasional mystery book. He was the go-to guy for info on vitamins and herbs and who played what instruments on what recording.

He was well-known in Thunder Bay and will be missed by many. If there is any tribute you wish to make to him, be kind and speak out against racism and the growth of right wing fascism.

Dominic is survived by his daughter Michaela and his much loved, precious grandsons Raiden, Riley, Phoenix and Rylan. Also Marsha and the Ivall and Besignano families, including his nephew Ian Lewis. Missing their Uncle Bes and savouring the memories are his nephews Earl, Shane, Neil and Matt Ivall and nieces Dawn and Laurie Ivall and their spouses. Thanks to Neil for the lovely boat ride and photo – only 3 years ago.

Dominic was predeceased by his parents Frank and Celia, sisters Darlene and Frances (Cookie) and niece Aimee Lewis.

In lieu of flowers, please consider a donation to Urban Abbey to assist in their efforts to make this city a better place for all.