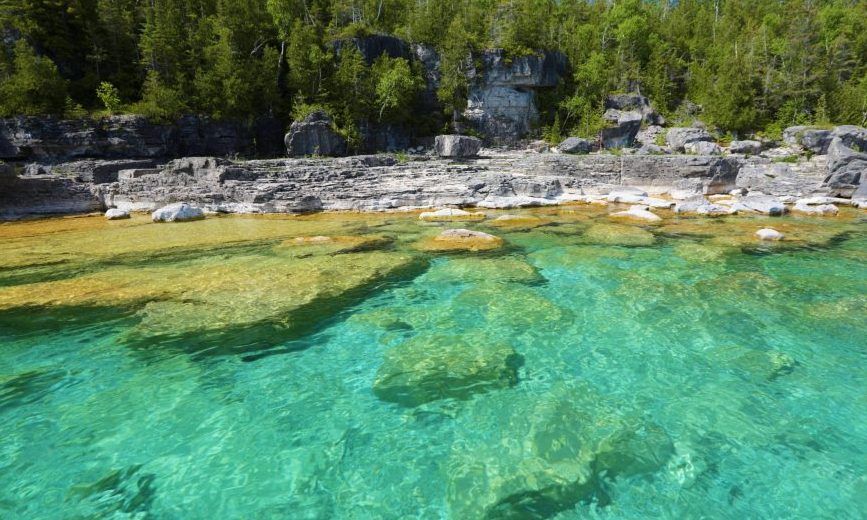 A documentary set to premiere on TVO on Friday evening will give viewers a pure and unique view of the top of the Bruce Peninsula.

Mitch Azaria of Good Earth Productions, who is executive producer the show called Tripping the Bruce, said Thursday that those who watch the episode get an uninterrupted run of the top of the peninsula that few have seen before in its entirety.

“I think for people, no matter how many times they have been to Tobermory, out to Flowerpot, taken a tour of some of the wrecks or gone to the grotto, they will never have seen what we are about to show them,” Azaria said. “Most of it is not accessible by land, and by water it can be a dangerous trip so very people do it.”

The show, which airs on TVO beginning at 7 p.m., is the third installment of a TVO Original series, taking the audience on a 34-kilometre sail along the Bruce Peninsula National Park coastline from Wingfield Basin to Flowerpot Island, as well as under the waves onto some of the area’s historic shipwrecks.

“The whole Bruce Peninsula, pick a side, pick the top or pick wherever, it is surprising it has taken as long as it has for the area to get discovered,” Azaria said of the influx of visitors to the peninsula in the past decade.

The style of shooting, Azaria explained, has deep roots in the Norwegian slow TV movement, which immerses the viewer in an actual trip to the area over three uninterrupted hours, something that can only be done on TVO. In the Rideau Canal show they were put into a boat, while the Niagara show is shot from the view of a red-tailed hawk flying over the river valley. They are back in the boat – the Dove II — for the Bruce episode.

Azaria said it was the spring of 2021 when they were working on deciding where to go for the third season of the series, and he heard from multiple people that they had to go to the top of the Bruce.

Azaria, who was familiar with the Grey-Bruce area having spent time at Sauble Beach and around Owen Sound in the past, said it was a place that was in his mind but he had never given serious thought too.

“So we went up there, and there are a couple of local filmmakers who live just south of Tobermory who took us out on their boat,” Azaria said. “We came out of the Tobermory marina and from the moment you hang that right to start heading east, you just start to think to yourself this is just an unbelievable landscape, it is just so stunning.”

Azaria said the Rideau is a mostly urban and “manicured” piece of water, while the Niagara River and the region around it is quite busy and populated.

But the Bruce Peninsula shoreline is a much more natural and undisturbed area, with very little signs of development.

“You can kind of see why there are all those shipwrecks, because where are you going to park,” Azaria said. “And then it just these soaring cliffs.”

Azaria said the production, not only gives viewers who may be quite familiar with the peninsula views of some unfamiliar areas, but also a different perspective than they may be accustomed too.

“When you are on land looking at water it looks one way, but when you are on water looking back it is like it is almost unrecognizable,” he said. “It is just such different views.”

He said one major takeaway from shooting the episode was how much the area resembled the Carribbean.

“The colour of the water, the clarity of the water and the way it works against the stone, that struck me,” said Azaria. “Another thing that struck me and still haunts me is imagining you were on one of those freighters or anything that went across the lake on a regular basis and what it must be like when a storm comes up.”

They incorporated some of the history of the area into the episode by actually diving and shooting footage of five shipwrecks – the W.L. Wetmore steamer, Niagara II freighter, City of Cleveland steamer, Alice G tug boat and Sweepstakes schooner.

The episode also includes about 150 pop-up information boards and ship animations before the wrecks.

“You get to go seamlessly underwater for 15 minutes at the same pace you were going above water to see the wreck and the minutiae of its detail,” said Azaria.

While he is really happy with the how the live-action above water footage turned out, Azaria said he is extremely proud of what they did underwater.

“It was a real, real challenge to shoot a continuous move, watchable, detailed shot underwater and we were able to do that,” said Azaria, who also highlighted the work of Kelly McAdam of Divers Den in Tobermory in shooting one of the wrecks.

“It is in the show. She shot a perfect 20-minute one-take video of a wreck.”

Tripping the Bruce can be viewed on TVO beginning at 7 p.m. on Friday and anytime afterwards via TVO.org, YouTube and TVO channels on smart TV services such as Apple TV and Roku.

Once the main show is released, four educational webisodes will also be available for viewers online: Biodiversity of the Bruce, Shipwrecks of the Bruce, Preserving the Bruce and Bruce Peninsula Bird Observatory.