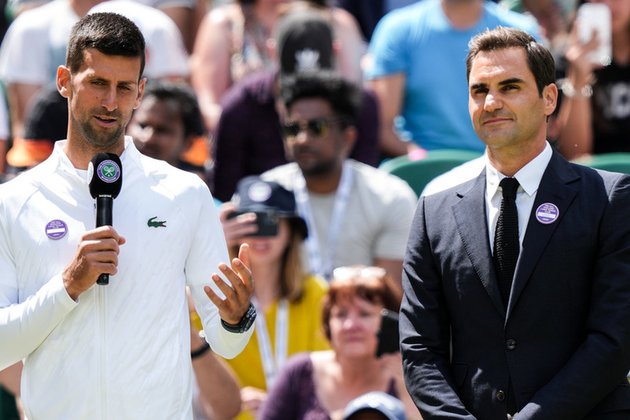 The Serb has announced his participation at the 2022 Laver Cup

Novak Djokovic has confirmed that he will complete a line-up of tennis legends alongside Rafael Nadal, Roger Federer and Andy Murray as they compete for Team Europe at the Laver Cup in London later this year.

Djokovic, 35, will join other members of the group once dubbed the ‘Big Four’ of their sport for the tournament at The O2 in the UK capital from September 23 to 25.

They will be part of a European team captained by Swedish former great Bjorn Borg, and will face off against Team World led by American legend John McEnroe.

For Djokovic, it will be the first time he has played the Laver Cup since Chicago in 2018.

“I’m really excited to be joining Team Europe again for the Laver Cup at London’s O2 arena in September,” said 21-time Grand Slam king in comments on the tournament website.

“It’s the only competition where you can play in a team environment with guys that you’re normally competing against and to be joining Rafa, Roger and Andy – three of my biggest all-time rivals – it’s going to be a truly unique moment in the history of our sport.”

Between them, Djokovic, Nadal and Federer boast a staggering 63 Grand Slam singles titles, while former world number one Murray also has three to his name.

The quartet have won 66 of the past 76 Grand Slam men’s singles title on offer – including two for Nadal this year and one for Djokovic most recently at Wimbledon.

Federer, 40, has been hampered by injury in the twilight of his career and has not competed since Wimbledon in 2021 – but said earlier this month that he was still targeting a September comeback.

Named in honor of Australian tennis icon Rod Laver, the three-day Laver Cup was introduced six years ago and features six of the best players from Europe against six counterparts from the rest of the world.

There are still two spots to be filled on the European team for this year, while McEnroe’s Team World thus far contains Canada’sFelix Auger-Aliassime, America’s Taylor Fritz and Diego Schwartzman of Argentina.

This year’s tournament will be a chance for Djokovic to compete in London, although the 35-year-old is set to be denied that opportunity at the US Open in August and September.

Organizers named Djokovic on the provisional entry list this week but confirmed that they would respect US government entry rules, which ban non-citizens such as Djokovic from entering the country if they are not vaccinated against Covid-19.

Djokovic repeated after his Wimbledon victory that he was not willing to get vaccinated against Covid simply to be allowed to play at tournaments, meaning he will be barred from upcoming US tournaments.