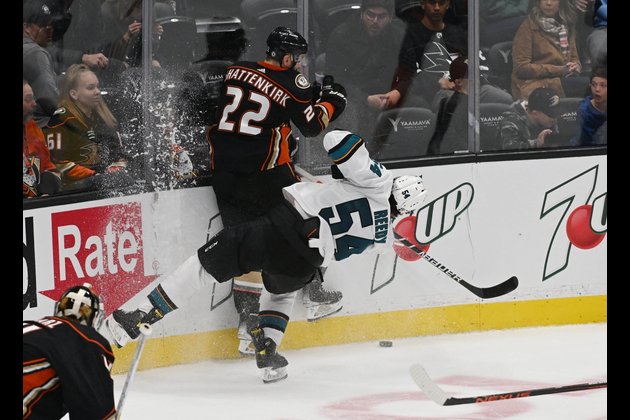 Seeing the San Jose Sharks on the schedule for Saturday night should perk up the visiting Anaheim Ducks.

Anaheim hasn’t won since beating the Sharks 3-2 in overtime on March 6. The Ducks have won just four of their past 19 games overall, and two of those wins were against San Jose.

The Ducks have lost eight in a row (0-6-2) since their latest win against the Sharks, effectively ending their hopes of qualifying for the playoffs for the first time since 2017-18.

San Jose’s playoff hopes faded behind a seven-game losing streak from Jan. 29-Feb. 22, and the Sharks haven’t played much better since ending the skid, posting a 4-5-2 record so far in March.

The game against Anaheim could be even more challenging for San Jose after veteran center Logan Couture was hit by a point shot from teammate Brent Burns and departed the 5-2 loss against the Edmonton Oilers on Thursday night.

San Jose did not practice on Friday, but coach Bob Boughner said after the game that he didn’t think the injury was serious.

The Ducks have also been without some key players recently, namely forwards Jakob Silfverberg (upper body) and Ryan Getzlaf (lower body), while leading goal scorer Troy Terry sat out the most recent game, a 4-2 loss to the visiting Chicago Blackhawks on Wednesday, with an illness.

Those absences have created an opening for other players to move into the lineup for the Ducks, including forwards Dominik Simon and Zach Aston-Reese, who were acquired in the trade for Rickard Rakell on Monday.

They made their debuts against the Blackhawks and Anaheim coach Dallas Eakins was impressed with what they brought to the team under the circumstances.

“It’s such a tough thing for all the players, but when you show up at a dressing room and they’ve gone through time zones, they just got here, they’re in the lineup, they’re playing with new guys, it’s a little unnerving,” Eakins said. “All I asked them is I said, ‘Go out there and play free, just go play, don’t worry about our systems or any of that, just go play.’ They both have different skill sets, but I thought they both fit in very well.”

Even though the Ducks have given up hope of making the playoffs this season, there’s still plenty to play for down the stretch.

“We’re never going to give up, that’s for sure,” Ducks forwards Sam Carrick said. “We’re going to stick together as a group, keep things positive and take things game by game. We’re out here trying to win every game. Nothing’s really changed, especially for a guy like me, there’s tons to play for.”