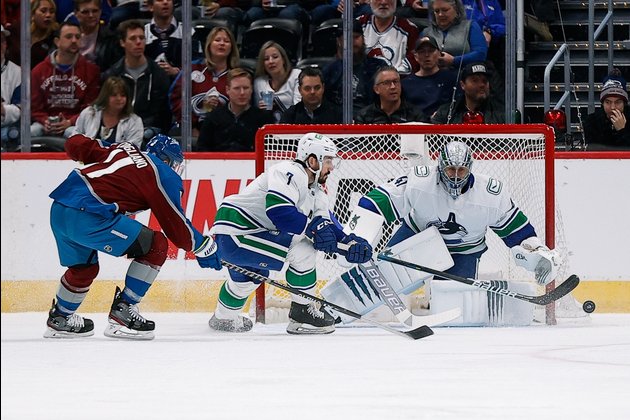 It’s not a question of making the playoffs for the NHL-leading Colorado Avalanche, but how deep of a run they can make in the postseason.

Colorado lost 3-1 on home ice to the Vancouver Canucks on Wednesday night in part because it went only 1-for-5 on the power play, something that has to be cleared up in the next month.

The Avalanche can start correcting things when they host the Philadelphia Flyers on Friday night.

The Avalanche went 6-for-10 with the man advantage in four games before meeting the Canucks. Colorado has had lulls on special teams this season, but those droughts become magnified in the postseason.

Colorado lost Wednesday despite holding a 33-27 advantage in shots during a game that was scoreless after the first two periods.

The Avalanche got their first look at forward Andrew Cogliano, who made his Colorado debut Wednesday night after being acquired from the San Jose Sharks. He logged just 8:14 of ice time but played a grinding game, which his new team wants from him.

“I’m a small piece of the puzzle,” he said. “To have success, I think you’re going to need different pieces and people and personalities, and that’s usually how winning teams work, so I’m hoping I can bring that to this team.”

Colorado hopes to get its other deadline acquisition into the lineup against Philadelphia. Artturi Lehkonen joined the team on Tuesday, but his immigration paperwork had not been finished in time to allow him to play on Wednesday. He was acquired from the Montreal Canadiens.

The Avalanche did not practice Thursday, so there was no official update on Lehkonen’s status.

The Flyers threw up the white flag when they dealt franchise icon Claude Giroux to the Florida Panthers on Saturday. Barring an incredible finish to the season, Philadelphia will not reach the postseason, but it can play spoiler to teams that are fighting for playoff positioning.

The Flyers did it Thursday night with a 5-2 win at St. Louis, doing Colorado a favor in the process. The Blues are 16 points behind the first-place Avalanche in the Central Division, and St. Louis slipped into third place when the Minnesota Wild beat the Canucks 3-2 in overtime on Thursday.

Philadelphia’s win came in the NHL debut of Hayden Hodgson, who had been playing for AHL affiliate Lehigh Valley this season. He was signed Tuesday by the Flyers to a one-year deal and made an immediate impact, Hodgson recorded an assist when Travis Konecny scored the first goal of the game and then added his first NHL goal midway through the third period.

Colorado is going for the sweep of the two-game season series. The Avalanche won the first matchup, 7-5 in Philadelphia on Dec. 6, which was Yeo’s first game in charge after the firing of Alain Vigneault.