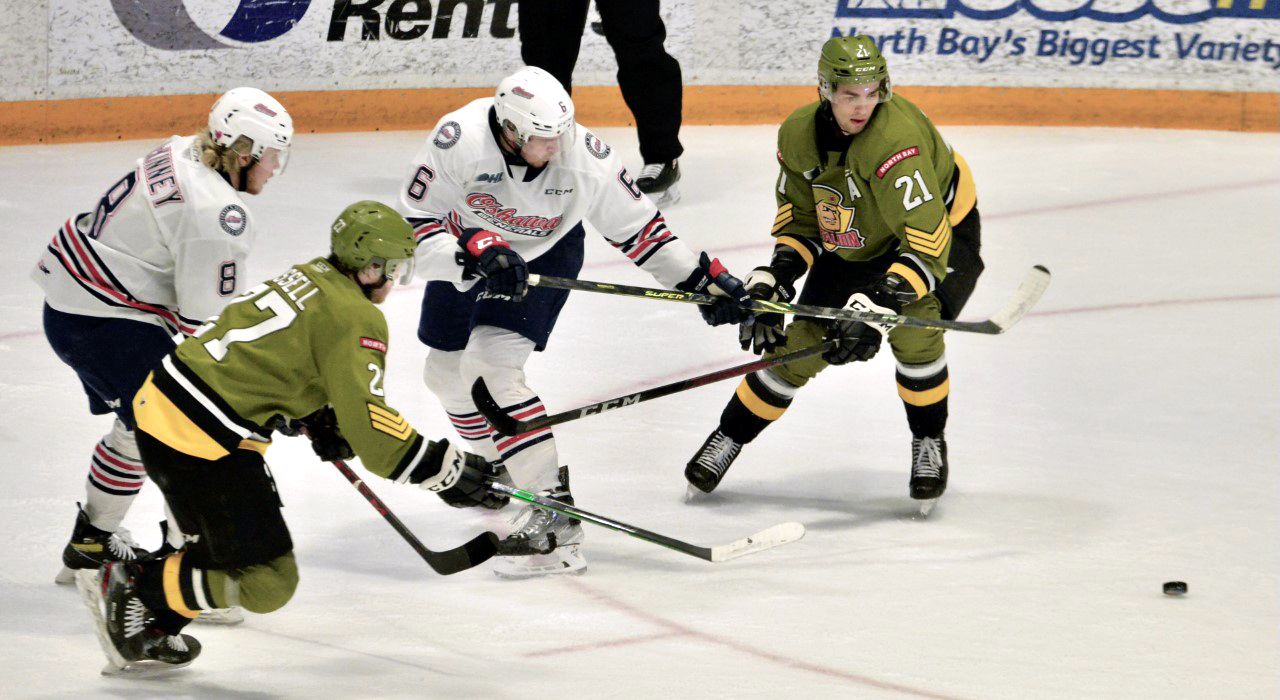 Matvey Petrov had an empty-net goal and one assist and Mitchell Russell also scored for North Bay, which improved its won-lost-extended record to 42-18-6 for 90 points atop the Central Division.

Brandon Coe provided two assists in his 250th career game, the first being his 100th point of the season, as he joined Justin Brazeau as the only Battalion players in the North Bay era to reach triple digits in a season. Brazeau had a franchise-record 61 goals and 52 assists for 113 points in 2018-19.

“They’ve got some guys who can kind of make something out of nothing, and Joe was big tonight in certain instances where they were starting to do that,” Oulahen said of the Generals, who, with the Ottawa 67’s and Peterborough Petes, remain potential first-round playoff opponents for North Bay.

The Battalion, which led 1-0 after 20 minutes, doubled the lead on the power play at 9:57 of the middle period when Winslow put his own rebound behind Leaver on a cruise across the crease. Petrov and Coe assisted on defenceman Winslow’s fourth goal of the season, which proved to be the winner.

Wakely knocked the puck home at 10:23 for a 3-0 lead, with Liam Arnsby and Owen Van Steensel drawing the assists. It was rookie Wakely’s 18th goal.

Tullio replied with his team-leading 40th goal at 17:46 during a delayed penalty call, batting the puck out of midair on a cruise past the left side of the net. Calum Ritchie and Cameron Butler had assists.

Vrbetic preserved the 3-1 lead with a save against Butler on a shorthanded break-in late in the third period before Petrov fired the puck long-distance into the empty net at 19:35. Paul Christopoulos had the lone assist on Petrov’s 39th goal.

Russell struck first, netting his team-leading 41st goal on the power play at 16:07 of the opening period. Coe fed the puck across the goalmouth to Russell deep in the left circle, with Grayson Ladd drawing the other assist as the Troops’ overagers combined on the scoring play.

The Battalion, which enjoyed the only two power plays in the period, forged an 11-7 edge in shots on goal, but Vrbetic, who benefited when Tullio fired high from the doorstep in the seventh minute, foiled him with the blocker on a breakaway in the 11th before robbing Jordyn Ertel in tight in the 19th.

The Battalion visits the Sudbury Wolves at 7:05 p.m. Friday. The game can be seen live in North Bay on YourTV Channels 12 and 700.

BATTALION BULLETS: On Fan Appreciation Night, which featured prizes from club sponsors and a second-intermission shootout for a shopping spree that included former star Zach Bratina, the Battalion saluted overagers Coe, Ladd and Russell. Each received a portrait by Jack Lockhart … The Battalion is 2-1-0 against Oshawa. The Generals prevailed 3-2 at North Bay on Oct. 28, and the Troops posted a 4-2 road win Nov. 19 … The Battalion went 2-for-4 on the power play. Oshawa was 0-for-1 … Coe has 86 goals and 132 assists for 218 career points, seventh in franchise annals. He ranks fifth in OHL scoring this season with 34 goals and 67 assists for 101 points in 62 games. In three games against Oshawa, Coe has four assists … Petrov has a five-game points streak in which he has five goals and three assists for eight points. In three games against Oshawa, he has two goals and as many assists for four points … Wakely has four goals in the last five games … The Battalion scratched Cam Gauvreau and Kyle McDonald, who completed a five-game suspension for a check on Chas Sharpe in a 2-1 road win March 27 over the Mississauga Steelheads … Among the missing for Oshawa was Oskar Olausson.