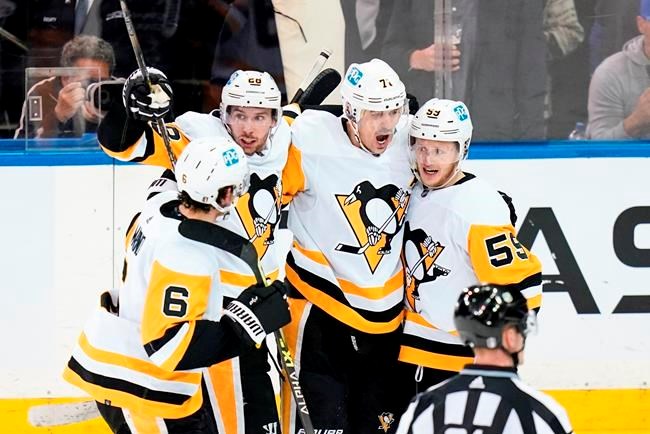 NEW YORK (AP) — Filip Chytil scored the tiebreaking goal early in the third period and the New York Rangers staved off elimination with a 5-3 victory over the Pittsburgh Penguins in Game 5 of their first-round playoff series Wednesday night.

NEW YORK (AP) — Filip Chytil scored the tiebreaking goal early in the third period and the New York Rangers staved off elimination with a 5-3 victory over the Pittsburgh Penguins in Game 5 of their first-round playoff series Wednesday night.

Jacob Trouba and Alexis Lafrenière each had a goal and an assist, and Adam Fox and Ryan Lindgren also scored for the Rangers. Igor Shesterkin, torched for 10 goals over three periods in the previous two games, had 27 saves.

Jake Guentzel had two goals and Kris Letang also scored for Pittsburgh, which leads the best of seven series 3-2. Evgeni Malkin had two assists and Louis Domingue finished with 29 saves.

Penguins star Sidney Crosby left with about seven minutes remaining in the second period with an apparent injury and didn’t return.

Game 6 is Friday in Pittsburgh, and a potential deciding Game 7 would be Sunday back at Madison Square Garden.

The Rangers got their first power play of the night early in the third period and took advantage as Chytil got a pass from Lafrenière in the right circle, turned around and whipped a shot past Domingue to put the Rangers ahead 4-3 at 2:53.

Pittsburgh pulled Domingue for an extra skater with about 1 1/2 minutes remaining. He returned briefly 20 seconds later during a stoppage in play and left the ice again. Lindgren sealed the win with an empty-netter with 16 seconds left.

With the Penguins leading 1-0 after 20 minutes, Pittsburgh’s Mike Matheson hit a goalpost 3 1/2 minutes into the second period. Domingue then made saves a minute later on a shot by Artemi Panarin and a tip try by Lindgren. The goalie also stopped a slap shot by Trouba and a follow by Panarin two minutes later.

Letang made it 2-0 at 7:58 as he got a cross-ice pass from Malkin and fired a slap shot past Shesterkin on Pittsburgh’s first shot on goal of the period.

The Rangers then took the lead as they scored on three consecutive shots in a 2:42 span late in the second.

Fox got the Rangers on the scoreboard with 4:49 left as he got the puck inside the blue line, slowly skated up and fired a shot from the top of the right circle past Domingue’s shoulder.

Lafrenière tied it 90 seconds later as he quickly fired a slap shot in front off a centering pass from Kaapo Kakko.

Trouba put the Rangers ahead another 1:12 later as he skated across the right circle and put a backhander from the middle through Domingue’s skates.

The lead lasted just 13 seconds as Guentzel tied it with his second of the night and seventh of the series as he scored off a centering pass from Malkin.

The Rangers outshot the Penguins 11-10 in the first period, limited mostly to shots from the outside.

The Penguins had a 5-on-3 power play early when Chris Kreider was called for slashing and Jacob Trouba for elbowing just 24 seconds into the game. The Rangers held them just two shots on goal during the advantage, with Shesterkin making a nice glove save on Guentzel.

The Penguins took a 1-0 lead with 9 1/2 minutes left as Guentzel got the rebound of his own shot and sent a centering pass from behind the goal line that deflected off Shesterkin’s leg and in. It was his sixth goal of the series.

Lindgren returned to the Rangers’ lineup after missing the previous three games following an upper body injury in Game 1 of this series. He replaced C Jonny Brodzinski as the Rangers went with seven defensemen and 11 forwards. Lindgren then left the with an apparent injury early in the second period and headed to the dressing room minutes later. He returned late in the period.

Kreider played in his 85th career playoff game, tying Don Maloney for the sixth place on the franchise list.

Vin A. Cherwoo, The Associated Press