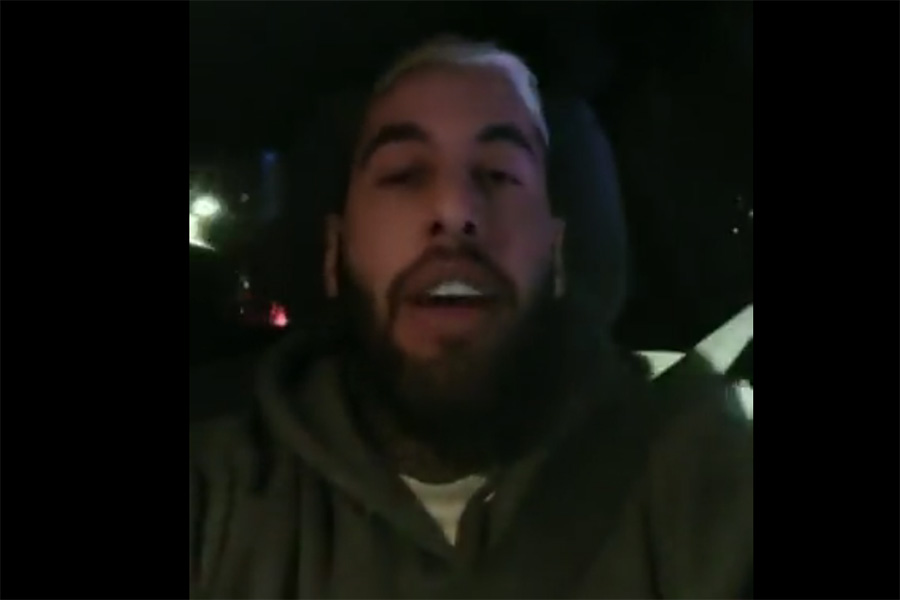 Some 40 per cent of Canadians believe COVID misinformation online, even when they suspect it’s coming from a questionable source

Chris Sky, aka Chris Saccoccia, in a recent video posted on Twitter shortly after his account was suspended from the social media platform.

Now more than ever in the grip of another wave of the pandemic, Canadians need our leaders (cultural, political, social) to help guide us through the mire we find ourselves in to start 2022. Unfortunately, our social channels are increasingly being suffocated by purveyors of false information. Canada is suffering from another pandemic. It’s the pandemic of misinformation. And there are a lot of bad actors on the internet of things that are responsible for that when it comes to COVID.

Chris Sky is one such individual who has been attracting attention lately after his Twitter account was suspended for not meeting the proverbial community standards when it comes to content he shares online. His Instagram, TikTok and Facebook accounts have also been suspended.

The muscle-bound anti-vaxxer has lots to say about the current state of the world, and vaccines and vaccine mandates in particular. None of it is worth paying much attention to. Only, his ideas are too dangerous to ignore.

That’s because he’s part of a global “infodemic” that’s overloading our cyberspace with nonsense and making it difficult to distinguish fact from fiction, and fantasy from reality. It’s going to kill us, just as surely as the coronavirus will if we don’t do something to stop it.

It’s already metastasized in the U.S., a country that post-Donald Trump finds itself locked in a civil war over the coronavirus. Canada’s proximity to the elephant south of the border has made us particularly vulnerable to the spread of pandemic propaganda. But efforts by the Liberals to rein in the madness have been characterized as “cancel culture” run amok and led to charges from the opposition benches that the government is trying to stifle free speech.

Except, the pandemic of misinformation is not only threatening the health and safety of the Canadian public. It’s eating away at public confidence in our institutions and putting our economy in peril.

That may come across as highfalutin BS, but not when you consider that more than a quarter of the Canadian population sees false or suspect information about the pandemic online several times a day.

According to Statistics Canada, 40 per cent of individuals who have come in contact with COVID misinformation online believe it to some degree – even when they suspect that it’s coming from a questionable source – only to realize later that it was false.

In other words, these aren’t just ideas floating around in the ether. They’re having real consequences.

Consider the burden the unvaccinated among us are placing on the health care system and the economy as their refusal to get jabbed continues to spread the disease, forcing the cancellation of elective surgeries, and prolonging the pandemic and lockdowns that are killing the economy.

The truth is that the unvaccinated make up 80 per cent of the people in hospital intensive care units in Ontario. That reality is mirrored in ICUs across the country.

Quebec premier Francois Legault recently alluded to the pandemic in Canada turning into a crisis of the unvaccinated saying of the latest lockdown measures in Quebec, including curfews, that “we have to protect the unvaccinated from themselves.” Indeed, some of the largest anti-vaccine and anti-lockdown protests in the country have taken place in the province. The result has been more disease and increasingly severe lockdowns.

Prime Minister Justin Trudeau hit on a similar theme in a recent interview with French-language television. He was chastised by some right-wing commentators for questioning whether Canadians should “tolerate” the views of the unvaccinated. He said, “they don’t believe in science and are very often misogynistic and racist.” The PM offered some context. He said, “it’s a very small group of people, but that doesn’t shy away from the fact that they take up some space.”

Which brings us back to Sky. The fact he’s been banished from social media channels hasn’t stopped him from using other social media accounts (including those of some of his acolytes) and his own website to spread his conspiracy theories. Last week, he ventured that Betty White was killed by the booster she reportedly took three days before her death. She was 99.

It’s becoming a popular conspiracy theory online that boosters are killing people. Another of Sky’s is that the government is trying to “poison” our children. To what end is not entirely clear. Maybe the government knows the aliens are coming to save us and they don’t want to tell us that they’re only taking the vaccinated with them? It seems as plausible as any other theory online.

That’s the way shit works on the internet. There are a lot of Chris Skys pushing conspiracy theories but not all of them have a global following. How did a rich developer’s son from Woodbridge become an internet star (pariah)?

It all reportedly started inauspiciously enough when Sky was interviewed by right-wing outlet Rebel News at an anti-lockdown rally at Queen’s Park at the start of the pandemic. Sky was among the protestors then concerned about the economic fallout from lockdowns when someone remarked after seeing him on Rebel News that he’d make a better speaker than those on stage. The rest, as they say, is history.

Now more than a few of his followers seem to think Sky is a minor prophet (a modern-day Nostradamus or some such), judging by the number of views of his recent videos online. That’s the thing about conspiracy circles online. They feed on themselves and coddle and encourage their so-called stars, for whom it’s not unusual to boast tens of thousands and sometimes hundreds of thousands of followers. Fear sells.

Sky’s predictions on COVID may seem prescient to some who fail to realize that the pandemic is a global phenomenon and that it’s easy to Google what’s coming next because it’s already happened somewhere else. Others have described him as a narcissist. Some have suggested he’s a government operative hired to spread anti-vaccine rhetoric to justify COVID restrictions. If that sounds twisted, then you get the picture of the milieu in which he operates. It’s full of clowns and contradictions.

Sky is often referred to in mainstream media accounts as an anti-mask “celebrity” or “personality.” He looks the part with aviator glasses, bleached blond hair and neck tattoo. But the emphasis on advocating for businesses has shifted to something more ominous.

It isn’t mentioned nearly enough these days how the anti-lockdown movement in Canada has become a recruiting ground for far-right groups, including moms on Facebook and otherwise right-thinking normal folks.

Indeed. Before he became famous Sky was a follower of the now-defunct Yellow Vest Canada movement, the self-described pro-pipeline outfit better known for promoting xenophobic and anti-Muslim views – and hanging Trudeau in effigy at rallies. Sky’s speaking engagement in Dublin, Ireland early in the pandemic was organized by that country’s Yellow Vest group.

Sky was also a follower of white nationalist movements on Facebook, according to the ARC Collective, which was among the first groups to note his growing presence at anti-lockdown demonstrations. Besides conspiracy theories about a one-world government, Sky’s views on the Holocaust and whether six million really died have also been part of the anti-COVID cacophony around him. When he was asked about that in an interview with the aforementioned Rebel News a few months back, he walked off the set.

Sky is also reportedly the owner of many guns, a fact which was disclosed after he was charged with allegedly uttering death threats against Doug Ford. His hyper-masculinity seems to be another selling point to his minions.

Nowadays Sky is a self-described “freedom fighter,” “human rights advocate” and “motivational speaker.” And his idea of “revolution” is shopping for socks while walking around unmasked at the West Edmonton Mall, getting arrested for it and then posting the video online so he can make himself out to be a martyr for the cause. Funny that since he claims to have a medical exemption not to wear a mask. He also talks a lot in his speeches about fear, ignorance and truth. It’s easy to be fooled.

Before he became a fixture on the anti-vaxx scene, Sky was better known as Chris Saccoccia. His LinkedIn profile lists him as vice-president of Skyhomes Corporation, the company that’s owned by his father, builder Art Saccoccia. But the account has been inactive for months and Sky has only one connection.

Sky reportedly has no role in the day-to-day operations of the company after the company officially distanced itself from Sky in 2020, publishing in a reply to a review on its Facebook page that his “opinions, comments, and actions… are not condoned by the corporation.” Sky has made reference online to running a small business (which ironically enough was reportedly deemed “essential” by the province during the first lockdown).

But he’s also seemingly managed to turn the pandemic into a side hustle, reportedly founding a number of what he describes as charities and non-profits to raise money for his various anti-lockdown causes. These include a Facebook group called Mothers Against Distancing and a GoFundMe campaign to raise money for “private on demand schools” for parents who don’t want to send their kids to school with masks. His online popularity has also led to the publication of a book (or pamphlet, depending on who you listen to) and a line of merchandise, including T-shirts and hoodies with a motto made famous by Nancy Reagan’s war on drugs in the 1980s.

“Just Say No” is not the most original catchphrase, but it’s an instructive choice in Sky’s case. Reagan’s campaign proved a hoax – it failed to treat drug use as the public health crisis it is. Sky is a pusher in his own right. But what exactly is his campaign trying to accomplish?

Some of his now-former disciples have been asking the same question recently now that Sky has been banished from the internet and has reportedly moved to Alberta where presumably his anti-vaxx views will be met with more sympathy.

Sky claims that the powers that be have conspired to “silence” him because “they know the freedom fighters are more awake and more aware and more plentiful than ever before.” But now that his lifeline to the outside world has been mostly choked off, will anybody hear?

We’d like to think not, but as we enter 2022 (and as long as there are political leaders like the one in Ontario doing everything in their power to cause confusion and frustration when it comes to the pandemic) there will be a lot of convincing to do.

Enzo was born in Belgium and emigrated with his family to Canada in the heat of Trudeaumania. He is a winner of numerous writing awards and the only (alleged) Commie banned from entering Cuba. It’s complicated. Claims to fame: champion wood-chopper.