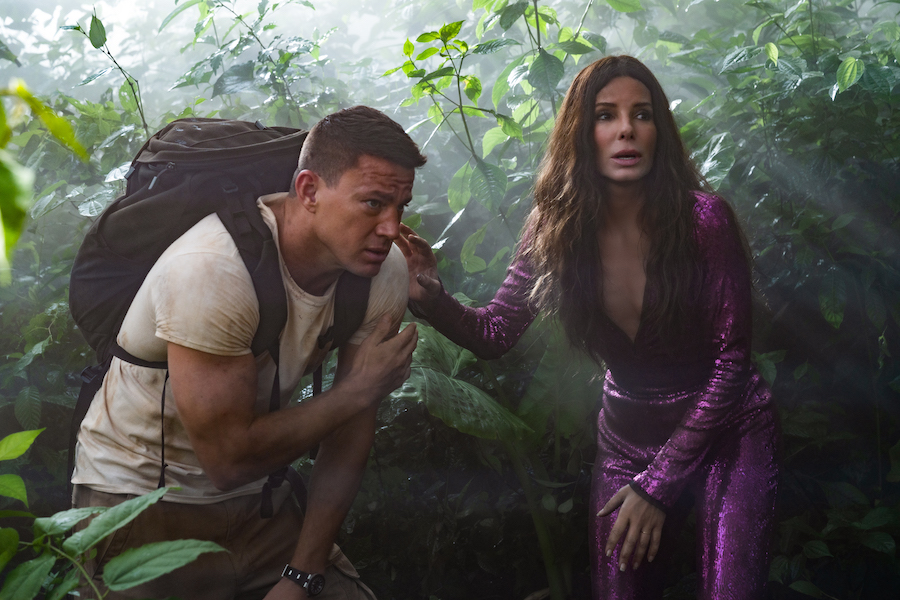 Channing Tatum is so absurdly charming that I didn’t entirely mind wasting nearly two hours with him and Sandra Bullock as they rattled around the stupendously hollow cavity of a movie, The Lost City. There’s genius to the way Tatum plays dumb so convincingly. He’s such a knowing and clever actor fully aware of what the audience expects of him and relishing every opportunity to play with it. And there’s something heartwarmingly genuine about the way he uses comedy to undercut his own ridiculous good looks.

The Lost City turns magical when Tatum shares the screen with Brad Pitt. Here are two movie stars who often try to redirect attention to their peers. But they’re playing characters who, while on a rescue mission, compete against each other for that movie star glow. They make the pettiness beautiful.

If only Tatum had as much chemistry with Bullock. She’s perfectly amiable. 30 years after appearing in her first rom-com (Love Potion No.9, for the record), Bullock can just sleepwalk through this kind of performance. And she’s satisfied with just letting Tatum try to muster up all the sparks on his own.

The plot doesn’t matter much. It’s not like The Lost City is even trying to be convincing. It’s just basking in the glow of its stars. 102 min. Now playing in theatres. NNN (Radheyan Simonpillai)

Toronto director Tommy’s first feature reunites him with Thomas Antony Olajide and Nick Haight, star and cinematographer of his striking 2016 short Mariner, for a very different story. Or maybe it’s not that different: like his character in Mariner, Olajide’s Dezi is a gifted young man who can’t get out of his own head. Here, he’s a talented jazz horn player and producer who can bring out the best in the artists with whom he works, but by the time we meet him his confidence has curdled into impatience and hostility. And then he meets Selma (Emma Ferreira), a singer on the way up. She’s got the backing of a label and a strong sense of herself, and she wants to work with Dezi. Naturally, this means Dezi doesn’t want to work with her.

Tommy and co-writer Marni Van Dyk scramble time and weave other storylines into Dezi and Selma’s collaboration, and once you figure out how to anchor yourself within the chronology it all just flows – driven by some very lovely music (some of it composed by Chester Hansen and Leland Whitty of BadBadNotGood, and some by Casey MQ and TiKA) and Haight’s positively tactile cinematography, which pays as much attention to textures and surfaces as it does to the actors.

And Olajide, who’s in every scene, is just great as Dezi, finding his own textures within a blunt, closed-off character and keeping him sympathetic even when he’s being a total asshole.