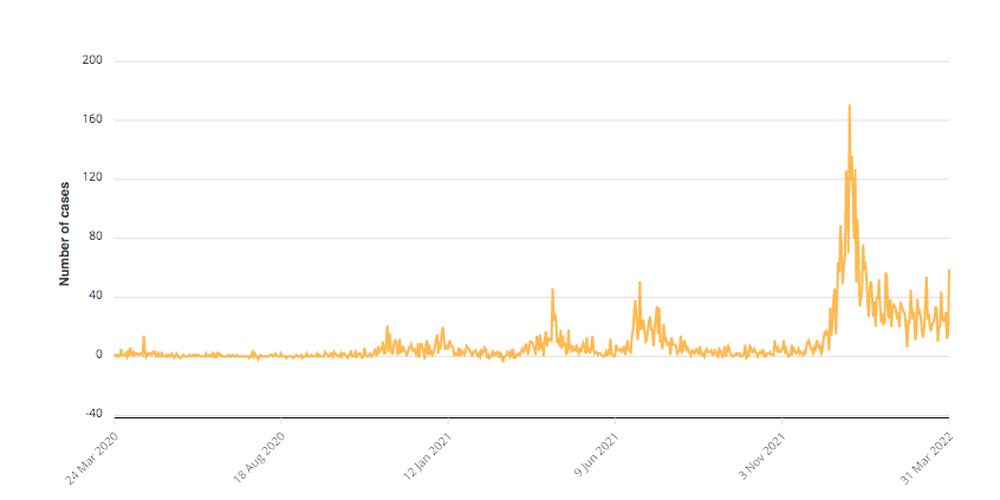 Public health experts in Ontario are calling a recent rise in COVID-19 case counts and hospitalizations the beginning of the sixth wave of the diease, but locally the data is inconclusive.

“For a trend to be a trend we need a few weeks not just a couple of days. We have seen an increase in the number of cases over the last three days, but I don’t want to jump and call it a trend,” said Dr. Ian Arra, Grey-Bruce’s medical officer of health.

Arra said Thursday an increase in virus circulation is expected as public health measures are eased and social gatherings increase.

“Other jurisdictions have seen the number of cases going up, but does that translate to more cases in hospitals and ICUs? With the vaccination rate – and the vaccine is very effective in preventing severe disease – all these things need to be monitored and we’ll continue to do that,” Arra said.

Since the Omicron variant became the dominant strain in Ontario, public health has shifted its strategy from virus containment to virus mitigation and focused on protecting high-risk sectors such as hospitals and long-term care homes.

Arra said it’s impossible to know how many people in Grey-Bruce have been infected as case counts soared earlier this year even as testing capacity diminished.

In Ontario, 12 to 17 per cent of COVID-19 tests administered in the past week returned a positive result.

Arra said indicators such as test positivity percentages used to monitor the spread of the virus earlier in the pandemic are becoming obscured because of shifting context.

“You cannot really compare it to the tests from the fall where it was the entire community (eligible for testing). Per cent positivity is a useful indicator, but it doesn’t show the entire picture. It’s not one indicator that’s going to tell the story, it’s a collective, and the trends within them that really guides the management of the pandemic.”

With case counts no longer providing a clear indication of the virus spread, some jurisdictions have moved to rely on wastewater samples to get a clearer picture.

Arra said in a largely rural area like Grey-Bruce with so many residents not tied into a municipal wastewater system, the wastewater data would provide an incomplete set of results.

The crucial indicators, he said, are those that point to an increase in the resulting severity of virus transmission within the community.

Provincial data shows daily case counts in Grey-Bruce are still higher than at any other time during the pandemic other than the Omicron surge in late 2021 and early 2022.

“Containment is not in the cards,” Arra said of the highly transmissible Omicron variant.

But because of factors including the severity of the Omicron variant – which is believed to be far less severe than the Delta variant – and the uptake in vaccinations, an increased spread of the virus within the community won’t necessarily result in widespread severe outcomes, Arra said.

“People are getting natural immunity as an immunity layer. Immunity comes from the vaccine or from wild infection, so, all-and-all at the end of the day we’re monitoring it and will continue to respond according to community needs,” he said.

Arra advised people to remain vigilant as the pandemic virus continues to circulate in Grey-Bruce. Wear a mask when in a crowded area, wash hands often, keep your distance where possible, and stay home if sick. He said a return to widespread testing or the reimplementation of public health mandates did not seem likely at this point.

“All of us need to be vigilant. Especially those of us with household members who have a predisposition to severe disease. We need to be careful,” he said.