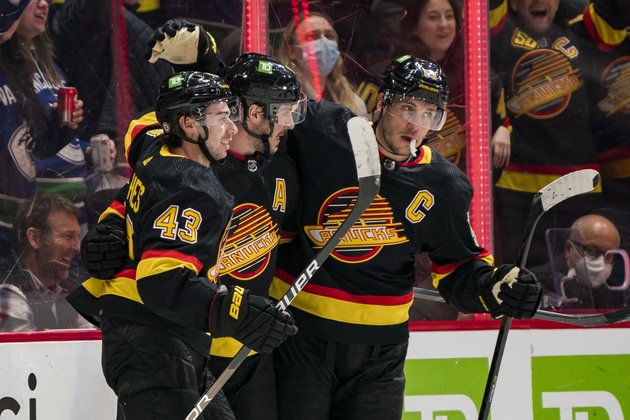 Considering the way Vancouver is playing, and how poorly the New Jersey Devils have fared of late, the Canucks could have a good chance at ending their lengthy losing streak in this series.

Looking for a fourth straight win, the visiting Canucks try for their first victory over the Devils since 2014 when they meet in Newark, N.J., on Monday night. The Devils have lost five straight at home.

Vancouver is outside of playoff position in the Western Conference, but has won five of six. The Canucks have outscored their opponents 17-5 during a winning streak that reached three games with Sunday’s 5-2 victory over the Rangers in New York.

“We want to be consistent and put together strings of four, five, six wins together,” Canucks coach Bruce Boudreau said. “We have to do that if we want to stay in the race.”

Vancouver’s J.T. Miller has recorded two assists in three straight games, the second-longest such streak in club history. He has nine assists and 13 points over the last six games. Teammate Elias Pettersson has three goals in two games, plus six with 14 points in his last eight.

The Devils, however, have dropped three of four overall and have been outscored 25-9 during their season-high five-game skid (0-5-0) on home ice.

It’s the third time since the start of last season that New Jersey, which posted its most recent home victory on Jan. 22, dropped at least five consecutive home contests in regulation.

If the Devils are to halt their home skid, they’ll need to rebound from Friday’s 8-5 loss at Chicago. New Jersey’s 191 goals allowed through 52 games this season rank among the most in the NHL.

New Jersey allowed just one power-play goal in the previous seven games before the Blackhawks went 3-for-4.

“You’re hoping this is just a one-and-out, because our penalty killing has been so good for so long,” said Devils coach Lindy Ruff, whose squad entered play Sunday ranked 11th in the league, killing 81.6 percent of its penalties.

“Frankly, I’d rather have three in one game than one a game. So hopefully we got it out of the way,” Ruff said.

Vancouver is 6-for-15 on the power play in its last four games.

New Jersey’s Jon Gillies has allowed six goals in each of his last two starts. His teammate, rookie Nico Daws, though, is 2-1-0 with a 2.77 goals-against average as a starter in 2021-22.

Meanwhile, Devils star Jesper Bratt has recorded four of his team- and career-high 18 goals in the last two games. He has 10 with 14 assists over his last 18 contests.

Thatcher Demko made 31 saves for the Canucks on Sunday, and has stopped 85 of 90 shots during a three-game winning streak. However, veteran backup Jaroslav Halak (2-5-2, 2.93 GAA) appears likely to make his first start since Feb. 9, according to Boudreau.