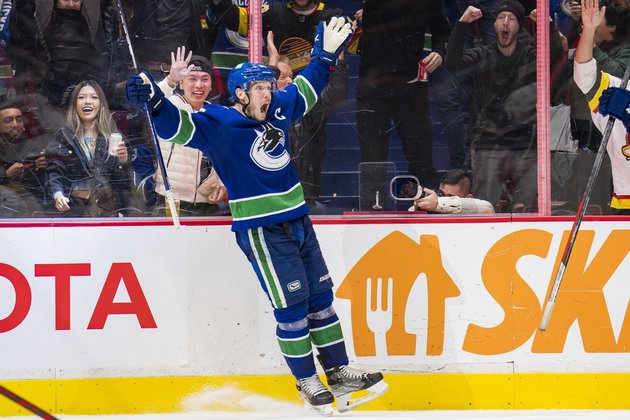 As they chase a wild-card playoff berth in the Western Conference, the Vancouver Canucks realize games such as Friday’s against the Washington Capitals aren’t that helpful.

Fortunately, Vancouver coach Bruce Boudreau’s bunch has five more chances to get back on track during their current seven-game homestand.

In the third match of the stand, Vancouver will host the defending Stanley Cup champion Tampa Bay Lightning on Sunday night to wrap up their season series.

Owning a 1-0-1 mark on its homestand, Vancouver scored three goals in the opening 4:59 of the third period to erase the Capitals’ 2-0 lead. However, Washington’s Evgeny Kuznetsov completed his second career hat trick to force overtime.

In the extra session, Lars Eller scored the game-winning goal in the first minute as Washington pocketed a 4-3 win and the two points.

“Obviously we’re happy to fight back (in the third), but ultimately we wanted those two points, and all the points from here on out are going to be huge for us,” said Horvat, who scored twice to reach the 20-goal mark for the fifth time.

“Just unfortunate that we couldn’t get the job done,” he added.

Single-digit outings could be vital down the stretch.

Fifth in the Pacific Division, Vancouver is just three points behind the Vegas Golden Knights, holders of the No. 2 wild-card spot.

Forward J.T. Miller has 23 points (seven goals, 16 assists) during an 11-game point streak for the Canucks, who have won three of their past four games and eight of their past 11 (8-2-1).

“We’re a desperate team,” Miller said. “Every game from now on out should be easy to get up for.”

Tampa Bay won the first matchup 4-2 on Jan. 13 behind a goal from Steven Stamkos, two assists from Nikita Kucherov and 24 saves by Andrei Vasilevskiy.

The victory was the Lightning’s fifth in the past six games against Vancouver. Their most recent defeat in British Columbia was 4-2 on Dec. 16, 2016.

After Saturday’s 4-1 loss against the Edmonton Oilers, the Lightning slipped to 1-3-0 on their six-game Western Conference road swing, which will end Wednesday in Seattle.

In losing three straight games in regulation for the first time this season, Tampa Bay went 0-for-4 on the power play — including a five-on-three advantage for 1:23 in the third period when they trailed 2-1 – and fell to 1-7-0 in the first of back-to-back matches.

However, the club killed off all seven Edmonton man advantages.

“We were definitely making it hard on ourselves by taking a lot of penalties,” defenseman Ryan McDonagh said. “Those are tough minutes.”

Zach Bogosian scored his third goal in the loss. Vasilevskiy should be back in goal for Tampa Bay after backup Brian Elliott was stellar in denying 45 of 48 shots.

The Lightning hold the second spot in the Atlantic Division — five points behind the first-place Florida Panthers and one point ahead of the Toronto Maple Leafs.