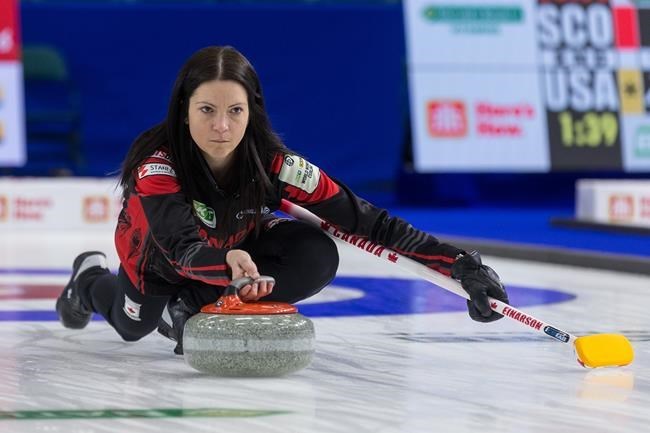 Canada’s 9-6 win over the Czech Republic to cap the preliminary round Friday ranked the host country third in the standings with a 9-3 record.

Einarson’s 8-5 win over Germany in the morning ensured Canada would be among the top six still playing Saturday to win a world title Sunday.

“I think we’re playing really well and there’s no reason why we couldn’t,” Einarson said.

Canada takes on sixth-seeded Madeleine Dupont of Denmark (7-5) on Saturday afternoon with the winner advancing to the evening semifinals.

Silvana Tirinzoni of Switzerland, winner of two consecutive world championships, topped the standings at 12-0 for a bye to the semifinals.

In the 43-year history of the women’s championship, her team became the fifth to go unbeaten in the preliminary round following Canada’s Jennifer Jones (2018) and Rachel Homan (2017), Sweden’s Anette Norberg (2005) and Canada’s Colleen Jones (2003).

“When we play, we don’t think about things like that, but when they happen, it’s something special,” Tirinzoni said.

Only Jones and Homan ran the table with no round-robin or playoff losses.

Tirinzoni also topped the preliminary round in last month’s Olympic Games in Beijing, but lost to Sweden’s Anna Hasselborg for the bronze medal.

Canada, South Korea and Sweden’s Hasselborg all posted 9-3 records and were 1-1 against each other.

Kim earned the higher seed with the best average among that trio in pre-game button draws throughout the round robin.

Hasselborg, seeded fourth in the standings behind Canada, meets Cory Christensen of the United States (8-4) on Saturday with the victor advancing to the final four.

Three-player Japan forfeited their afternoon game against South Korea because of COVID-19.

Members of their team tested positive for COVID-19 in morning rapid tests, the World Curling Federation said in a statement.

The WCF didn’t identify those players. Japan was minus third Seina Nakajima and alternate Chiaki Matsumura in morning loss to the Swiss that dropped the Japanese to 6-5.

Japan, whose three players wore masks Friday, was the second country among 13 impeded by the virus. Scotland dropped out on the second day after four team members tested positive.

“Before the Olympics, we had to be so careful and now again, I feel so bad for those two teams,” Tirinzoni said. “There is some fear for sure, but there are only two days left so I think we should be fine.”

Einarson, third Val Sweeting, second Shannon Birchard and lead Briane Meilleur out of the Gimli Curling Club in Manitoba reached the playoffs a second straight year, but their road in Prince George was less fraught.

They opened 1-5 in Calgary last year and scrambled to squeak into the final playoff berth. Einarson then lost to fall short of the semifinals.

The Canadians went 2-2 on opening weekend in Prince George before winning seven of eight, including the forfeit from Scotland.

“We’re better than last year,” Einarson said. “We’re just happy to be in the playoffs.”

In addition to 27 centimetres given up to South Korea in the pre-game button draws, Canada’s 8-7 loss in an extra end to Kim on Thursday came back to haunt Einarson when it came to the semifinal bye.

Einarson gave up a steal of one in the 10th and the 11th to Kim.

“If we’d won that one we would have been second, but it is what it is,” the Canadian skip said. “We like playing extra games. We never take the easy road.”

The skip said her team needed to relax more after that loss than rehash it the previous evening.

“I said ‘we don’t need to talk about that game. We know what happened and we can park it,'” Einarson said. “And then (we) had a drink and played a game of marbles.”

This report by The Canadian Press was first published March 25, 2022.