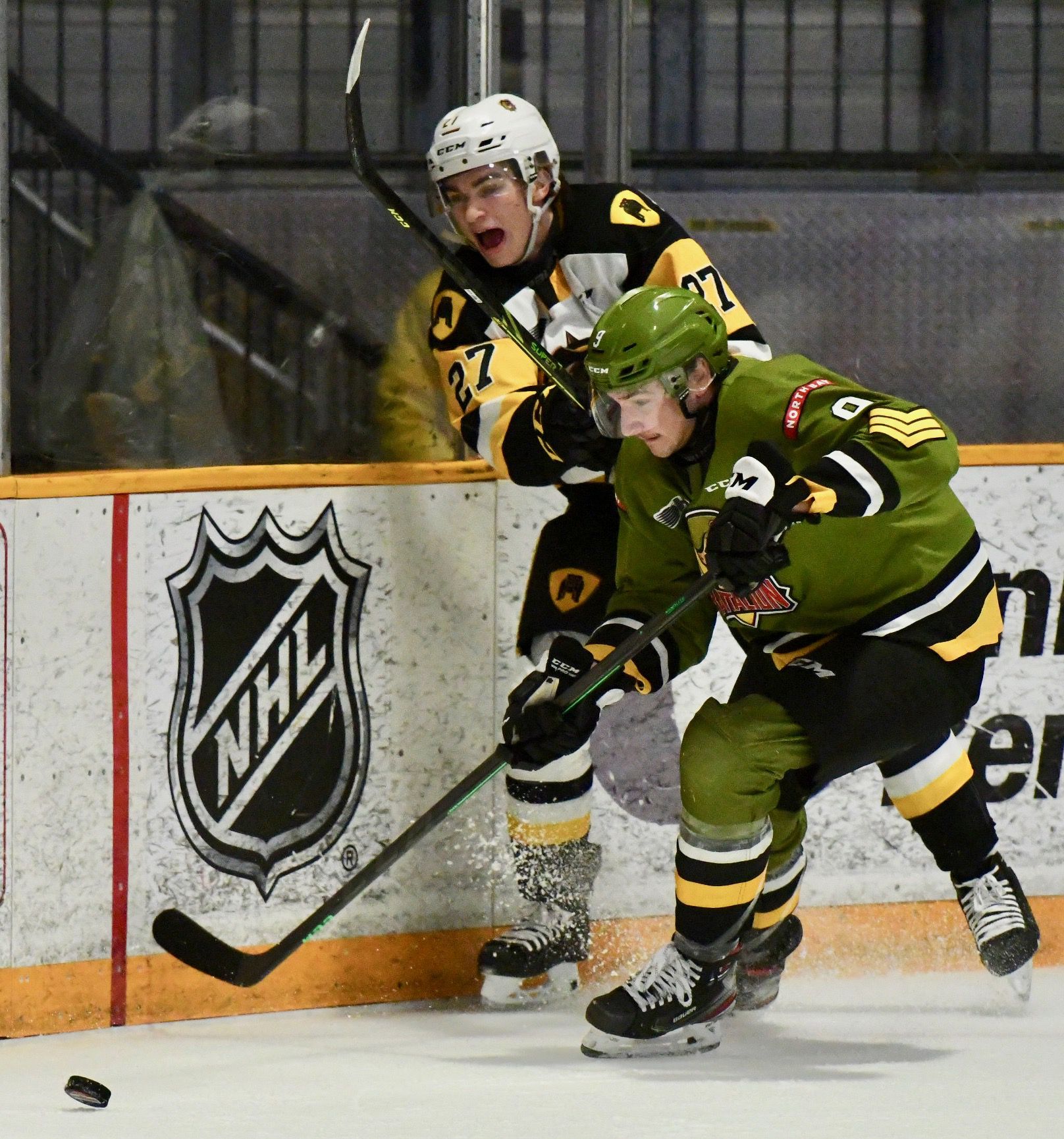 Patrick Thomas and Ryan Winterton each had one goal and two assists, and Nathan Staios, Logan Morrison and Lawson Sherk, into an empty net, provided a goal apiece for Hamilton, which won a fourth straight game in moving its won-lost-extended record to 41-12-4 for 86 points atop the East Division, Eastern Conference and league.

Goaltender Matteo Drobac made 17 saves before a crowd of 2,434 at Memorial Gardens, where anti-covid masks were optional.

Kyle McDonald had one goal and one assist and Tnias Mathurin and Kyle Jackson each scored a goal for North Bay, 35-18-6 for 76 points, tied for first place in the Central Division with the Mississauga Steelheads, who defeated the host Peterborough Petes 4-3. The Battalion has two games in hand on Mississauga.

Goaltender Joe Vrbetic allowed five goals on 26 shots as the Troops suffered their first loss since a 7-2 setback Feb. 25 at Hamilton.

Mathurin returned to the North Bay blue line after losing 15 games to an upper-body injury suffered in a 5-4 overtime win Feb. 4 over the visiting Sault Ste. Marie Greyhounds, and Ty Nelson suited up after playing Wednesday night at Kitchener in the Canadian Hockey League-National Hockey League Top Prospects Game.

The Battalion, which trailed 3-1 through 40 minutes, pulled within a goal when McDonald snapped the puck from the left dot inside the far post at 5:31 of the third period. Liam Arnsby and Owen Van Steensel assisted on McDonald’s 34th goal of the season, his 17th in 24 games since a trade from the Windsor Spitfires.

Thomas collected what proved to be the winner at 9:49, sweeping the puck through a goalmouth scrum on assists by Winterton and McTavish. Battalion coach Ryan Oulahen appealed to referee Sean Reid for a goaltender interference call to no avail.

Winterton made it 5-2 at 12:15, backhanding the puck past Vrbetic on a cruise past the left side of the net on a play that appeared offside. Assisted by McTavish, it was Winterton’s 16th goal.

Vrbetic left for a sixth attacker, and seconds later Jackson put the puck behind Drobac on assists by Mitchell Russell and Grayson Ladd at 17:35, but Sherk deposited the disc into the empty net at 19:15.

Hamilton led 1-0 after 20 minutes, but Mathurin tied it at 1:09 of the second period, snapping the puck home from high on the right side off a quick pass from the right corner from McDonald. Van Steensel had the other assist on defenceman Mathurin’s third goal.

Morrison took possession of the puck in the slot and put the rubber past Vrbetic on the glove side at 10:07 for a 2-1 lead. Arber Xhekaj and Ryan Humphrey assisted on Morrison’s 31st goal.

McTavish connected at 17:31, taking a back pass from Thomas and, using Nelson as a screen, scoring to the blocker side. It was McTavish’s 14th goal, with Winterton drawing the second assist.

Defenceman Staios struck at 1:20 of the first period, stepping to the top of the left circle and wristing the puck through traffic for his 14th goal.

The Battalion opens a two-game road trip with a visit to the Niagara IceDogs at 7 p.m. Saturday before facing Mississauga at 2 p.m. Sunday. Both games can be seen live in North Bay on YourTV Channels 12 and 700.

BATTALION BULLETS: Canadore Community Appreciation Night saw a high school student win tuition for a year, with other prizes and swag available at a table in the concourse. Canadore College students assist with the video board and game-night cameras … The teams completed their four-game season series. The Battalion won 4-2 at home Oct. 21, handing Hamilton its first loss of the campaign, and prevailed 5-2 on the road Dec. 3 … North Bay had an 11-game home winning streak ended … Each team went 0-for-2 on the power play … In  139 games with the Battalion, Russell has 64 goals and 70 assists for 134 points, one more than Scott Tanski and 25th in franchise history. Russell has an eight-game points streak in which he has six goals and seven assists for 13 points … In four games against Hamilton, Jackson had three goals and as many assists for six points … The Battalion scratched Cam Gauvreau and Anthony Romani … Among the missing for Hamilton were Jorian Donovan, Mark Duarte and Marco Costantini, with Tristan Malboeuf backing up Drobac. Donovan played in the Top Prospects Game … Morrison has a 16-game points streak in which he has 13 goals and 18 assists for 31 points … In three games against the Battalion, including one with Peterborough, MacTavish had six goals and four assists for 10 points … Tyson Stewart was the other referee.