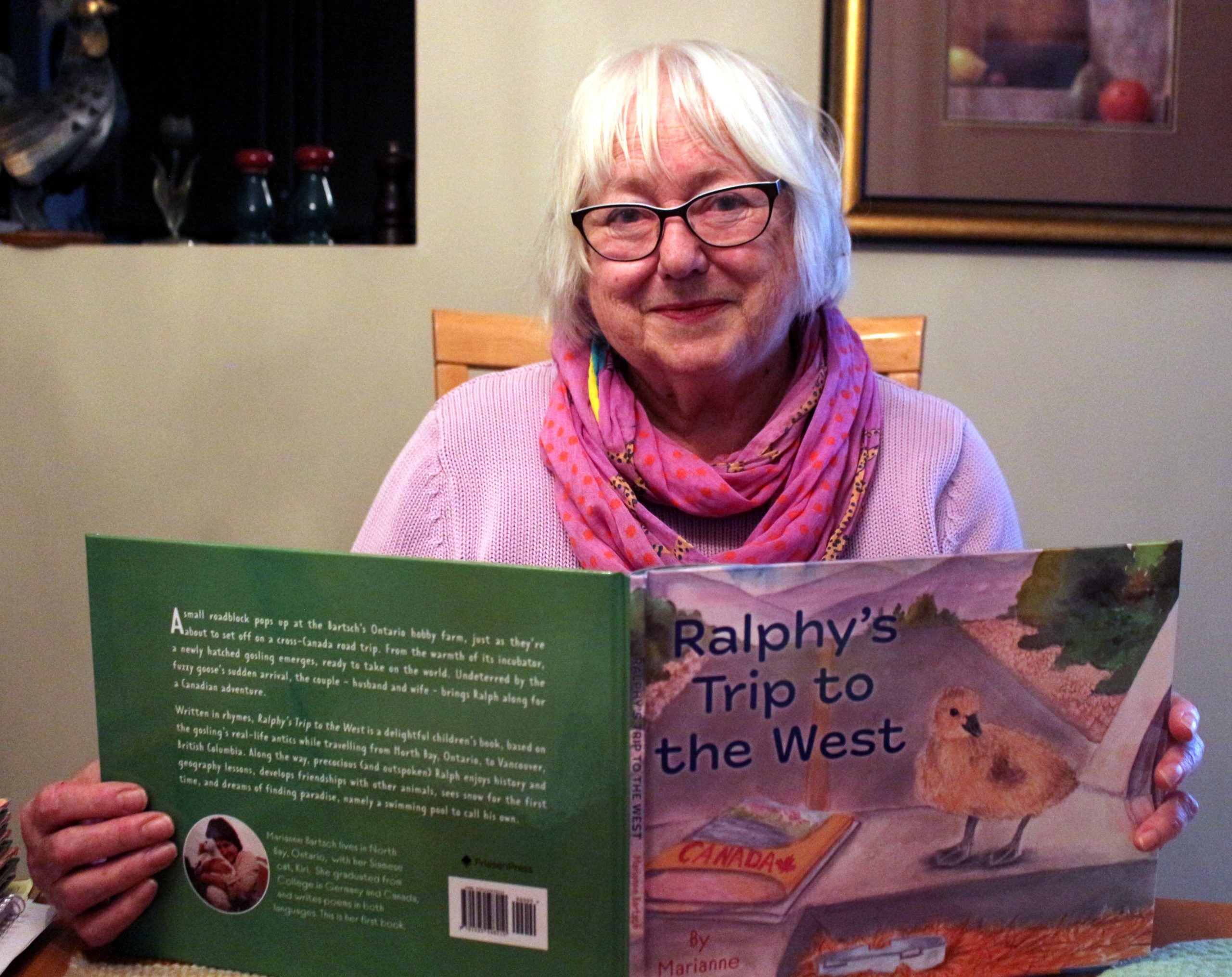 Ralphy was only a day old when he made his first trip across the country.

That trip has been memorialized in the book Ralphy’s Trip to the West, the first book by Marianne Bartsch.

“The day before we left this little gosling hatched, and we couldn’t postpone the trip,” Bartsch says of that long-ago journey when she, her husband and the little gosling got in their car in North Bay and headed to Vancouver.

Ralphy, wrapped in a cocoon of carpeting, had a front-row seat for the journey. He travelled on the dashboard of the car all the way.

Bartsch has always loved geese, and she and her husband had a flock on a little hobby farm they owned in the Powassan area. But the rest of the flock was much older and larger than Ralphy, so they decided that, even at that tender age, he would have to accompany them.

“I’ve had the manuscript about 30 years,” Bartsch says. “Even longer. So I decided to do the book now.

“I love geese. They’re my favourite birds, and I thought it would be a nice story.”

The book is written in rhyme, making it easier for younger readers to enjoy, and illustrated professionally in watercolours. It tells the story of the road trip, through the eyes of the gosling.

Already, there are copies of the book in the North Bay Public Library and at the Montessori school in North Bay. She has also donated copies to the pediatric unit at the North Bay Regional Health Centre and to One Kids Place.

It is also available for order at Coles bookstore.

Both the library and the Montessori have asked for a reading of the book as well, something which hasn’t been nailed down yet.

Geese, she says, are “very intelligent. They remember a lot and they will protect you like a dog would. If you have a goose, you have a friend for life.”

Ralph, she said, had character.

“He was a male, which are much more aggressive,” she said. On one occasion he went into a chicken coop and “he was the boss,” just taking over as though it was the natural way of things.

And although Bartsch says she was “a big city girl,” buying the hobby farm was a good decision for her.

“We had geese, chickens, ducks, a goat and rabbits, and I learned to love nature,” she says.

“I miss it, but it’s too much to look after for one person.”

Bartsch says while she had the manuscript for about 30 years, the actual publishing process – which included working with the illustrator who lives in South Africa – took about 14 months.

It was all very time-consuming,” she says.

She had to learn how to use illustrating programs on the computer, make sure the illustrations matched the story – including eliminating one with mountains in Saskatchewan – and deal with the demands of publishing.

There is no sequel or other books in the works right now, but she has held one signing event in the condo she lives in on the Lake Nipissing waterfront. She actually ran out of hardcover copies, although another shipment arrived Thursday.

“I never expected it to be so popular,” she admits.

Royalties, she said, will be donated to a charity, although she hasn’t determined which group will receive the funds. She hopes to decide on that shortly.