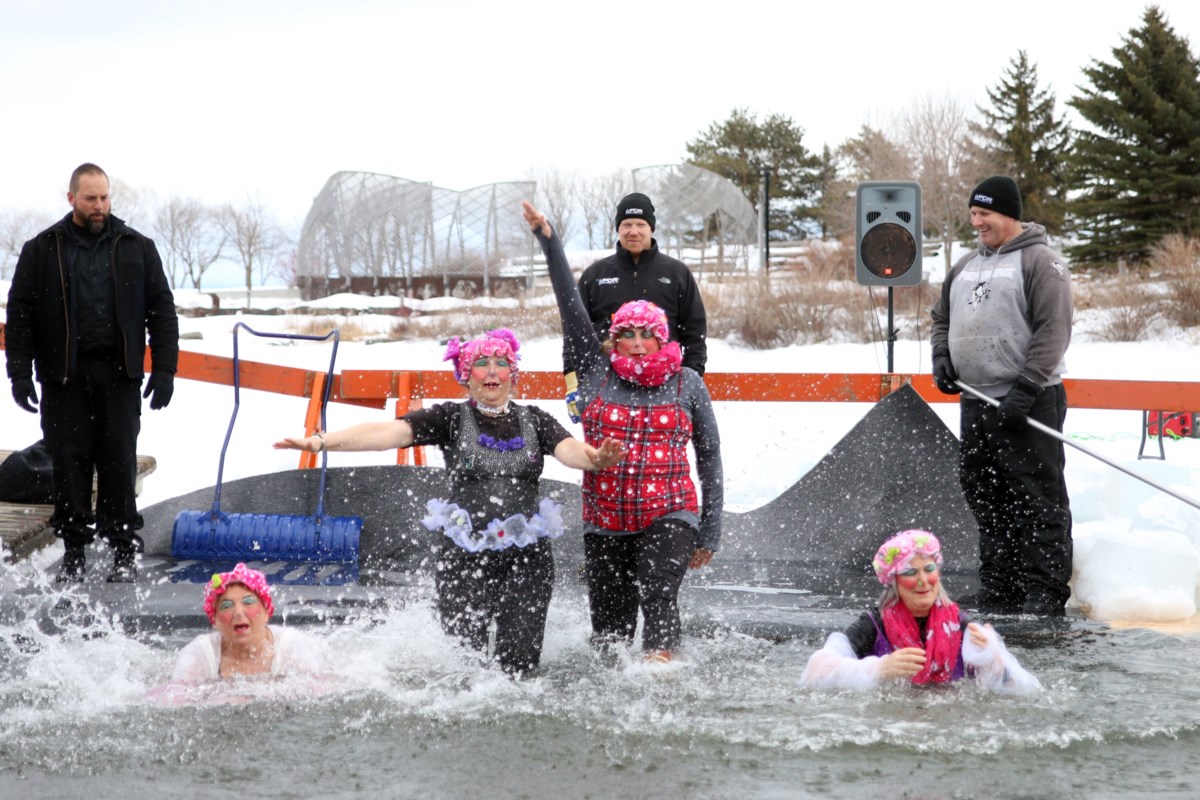 The Thunder Bay Polar Bear Plunge takes place on April 9 this year and it’s not too late to join.

THUNDER BAY — Jumping into a freezing lake might not sound like fun, but it is, says Shelly Brown. The retired nurse first participated in the Thunder Bay Polar Bear Plunge in 2018, after seeing a post about it on social media.

“I signed up, and posted [on social media] that I was looking for a couple of other adventurous individuals to do it with,” Brown explains. “Within 15 minutes I had five other ladies. Before I knew it I had a team!”

Brown’s team, Freezin’ for a Reason, has been plunging every year since. The event was cancelled in 2020 and 2021 for pandemic reasons, but is back this year, better than ever.

“The first time, we jumped in a hole then climbed out. A lot of people had trouble climbing out,” she recalls. This year, the plunge is taking place in shallower water, which means participants can walk out on their own instead of being pulled out by volunteers. “It’s a big improvement,” she laughs.

Brown says getting her friends to plunge into icy water wasn’t a hard sell at all. “You know, the water temp isn’t much different between winter and summer. Even in the summer it’s pretty frigid,” she points out pragmatically.

This year, she will be out of town and won’t be plunging, but there are nine other women on the team. Freezin’ for a Reason prepares for the event by coming up with fun costumes. At the last plunge, in 2019, the women decided to go as synchronized swimmers, with lots of makeup and bedazzled hot pink outfits. This year, they are going as gnomes.

The worst part about plunging is the anticipation, she says. “You think it’s going to be way worse than it is. But you just go for it. It’s going to be very safe.” Just don’t come all bundled up, she cautions: “The more clothes you have, the wetter you get. I’ve jumped in just shorts and a shirt. You don’t really need a whole bunch of clothes.”

There will be a warming tent for getting changed into dry clothes. “It’s great fun,” Brown says. “Everybody’s in a great mood, laughing and happy.”

Brown and her team have raised thousands of dollars for various charities at the event. In 2019, she raised over $2000, the most money raised by an individual that year.

“People see the value in Roots to Harvest and the other groups [that the event supports,]” she says. This year, the money raised from the event will go to the Special Olympics Thunder Bay, the CNIB Foundation Ontario, Roots to Harvest, and PRO Kids, a service offered through the city of Thunder Bay that places children and youth in community activities for families that cannot afford the fees.

Brown is always happy to support Roots to Harvest. “I have a personal connection. When my youngest son was in high school, Roots to Harvest and [Executive Director] Erin [Beagle] gave him his first job,” she explains. “It really helped him out and after that, seeing what they did for my son, I wanted to help as much as I can. I volunteer as often as I can, and I donate to them monthly.” She is looking forward to participating in another fundraiser for Roots to Harvest, Matterhorn Madness, in the summer.

There’s still time to register for this year’s plunge – there is even last-minute registration until 10:30 on the day of the event, April 9. “Do it, it’s the most fun 30 seconds of your life,” Brown says warmly. “You hit the water, and when you come out, you got the biggest grin on your face. You’ve accomplished something. It’s over in two minutes. Everybody can do something for two minutes. Just go for it!”