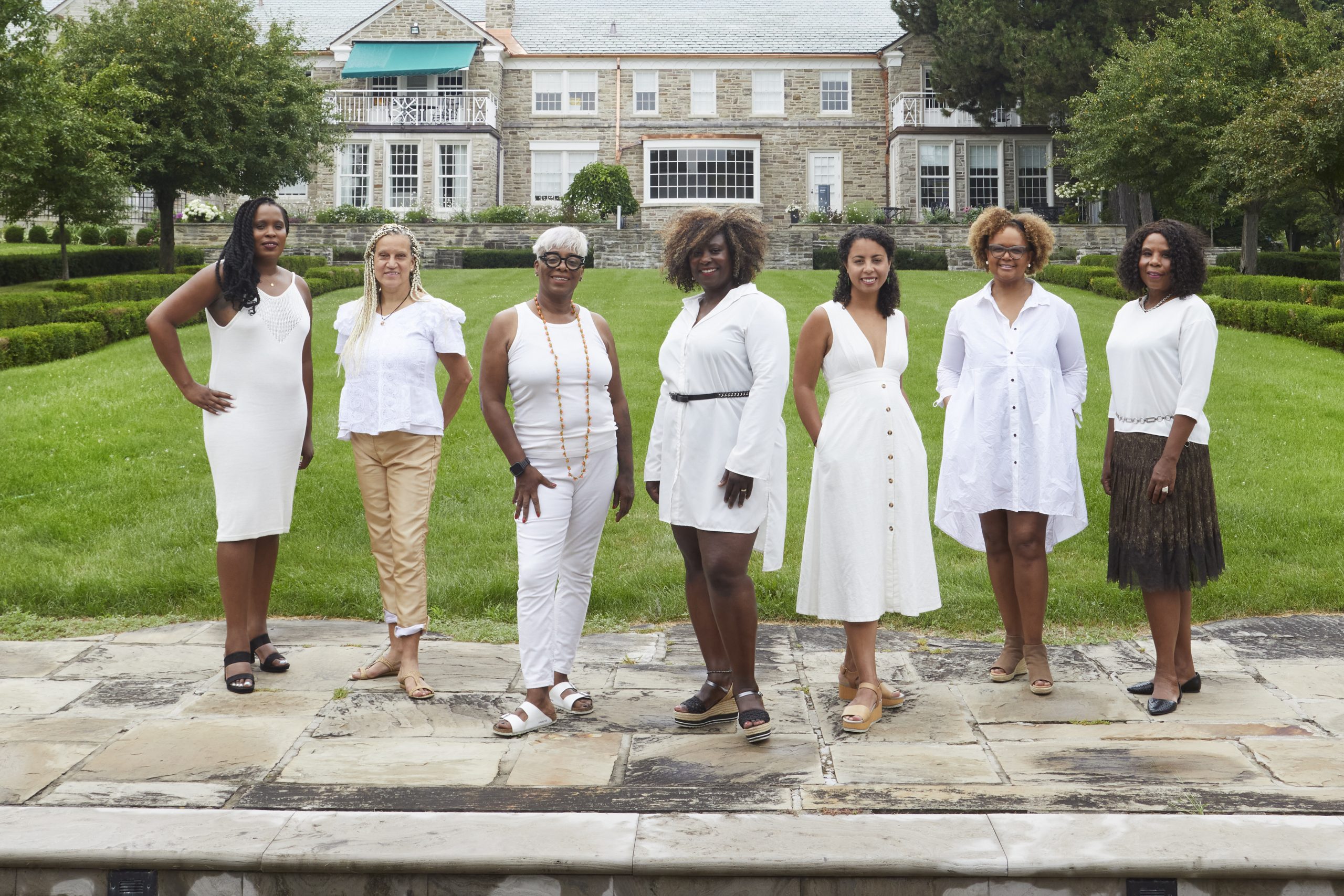 After the social justice protests in 2020, we would no longer accept a world in which those in power did not actively work to create equity

Executive director Maxine Bailey is changing the game at the Canadian Film Centre.

I’m browsing Twitter in July, following Canadian film industry channels that post about opportunities and development incubators. There’s a call out for a crew position. I tag a few friends I think are right for it. Swipe down. Refresh. And then there is a tweet from the Canadian Film Centre announcing that new fellows will be awarded a scholarship that offsets their fees plus a weekly stipend. It’s a monumental change. The celebratory replies say so, exalting at the removal of barriers that often make BIPOC filmmakers shy away from the illustrious programs.

Amidst the digital applause are the notes of appreciation for Maxine Bailey, the recently appointed executive director at the CFC. Bailey is an industry mainstay, having spent more than a decade and a half at TIFF before joining the CFC. Her entrance into this role is part of a long-overdue shift that puts the power in the hands of those who have rallied around actionable change. It confirms what my peers and I have always known: Black women are often at the forefront of revolutionary changes. What we’re seeing in the Canadian film and TV industry is no exception.

And Bailey has company when it comes to Black women shaking things up: there are also trailblazing women like Kadon Douglas at BIPOC TV & Film, Tonya Williams at Reelworld, Frances-Anne Solomon at CaribbeanTales, Joan Jenkinson, Maya Annik Bedward and Jennifer Holness at the Black Screen Office, and so many others.

Conversations I have these days with mentors and peers have an optimistic undercurrent even when talking about all that needs to be done. It’s different from the energy in the years leading up to the summer of 2020. Up to that point, most BIPOC filmmakers were resigned to a future where you’d either need to leave the country or claw your way up the ranks of Canadian media.

Then, the civil unrest ignited by the brutal murder of George Floyd became a catalyst; conversations that happened in safe spaces exploded to the top of the zeitgeist. In a bittersweet way, it became the driving force behind the momentum that would change things globally. That summer, the crisp graphics that took over social media centred around education, reflection and most of all accountability. Across all industries, from health care to media, Black people pointed at the elephant in the room; things were unbalanced and we would no longer accept a world in which those in positions of power did not actively work to create equity.

There wasn’t a day in which you wouldn’t be invited to panels, surveys and long Twitter threads. The calls to action were extremely loud. Journalists used their platforms to amplify voices and conversations, organizations formed and exoduses from major broadcasters superseded the 24-hour news cycle. On one hand, it felt like the rug was constantly being pulled out from underneath the feet of those who had stood on magic carpets that easily took careers to new heights. At times it felt repetitive, sometimes aimless, like momentum was waning. Between the sharing of articles and open letters saying the quiet part out loud and tongue-in-cheek responses to the valid complaints about discrepancies in funding, we asked, often out loud “what’s the plan? Is anything going to change?”

In July 2020, BIPOC TV and Film responded to criticism regarding gatekeepers at Telefilm by launching a call to action for more transparency in the film funding process and support for underrepresented groups. Less than six months later, the answers started to form. Organizational leaders announced new solutions based on the challenges they experienced while impacting an entire industry. Filmmakers unapologetically told stories about what was most important to them. Journalists and thought leaders, amplified voices and shed light on disparities buried in surveys and studies. And quickly, the narrative snapped into focus for everyone watching, as if they collectively said, “Fine, we’ll do it ourselves.”

Have you ever felt the ground slightly shift beneath you? The moment came, when the Black Screen Office was formed. Behind the desk, Holness, Jenkinson and Bedward formed part of a team that has gone on to launch career-shifting programs and address essential issues publicly. Recently, they headed to Cannes alongside the Indigenous Screen Office with support from Telefilm, bringing new Canadian faces to the illustrious French festival.

Already an industry staple, Williams and Reelworld Film Festival launched Access Reelworld, a recruiting platform for BIPOC on and off the screen. “Reelworld uses their experience and scope to put people in places they need to be – they’re looking at areas others might not be,” says Sasha Leigh Henry, creator of Bria Mack Gets A Life (coming in 2023). “They know there are so many ways to get people into the industry.”

Samantha Kaine led the Producers Pledge, committing an industry response from people working behind the scenes, and the formation of IMPACT, a platform for producers and production companies to receive the support they need to thrive. This is some of the work done in the last few years, building on the foundation of industry veterans. “There are also numerous Black women behind the scenes at our funders, film festivals, broadcasters, banks and production companies making transformative changes when and where they can.” says Kadon Douglas, the inaugural executive director of BIPOC TV and Film.

The symbiotic relationship between organizations and creatives has refuelled us, empowering us collectively to create and tell the stories that we haven’t seen in Canadian media. Before the shift of 2020, Ngozi Paul and Trey Anthony’s Da Kink In My Hair was one of the only Black Canadian sitcoms on TV. The final episode aired in the summer of 2009. The last time Canadians saw a local Black sitcom was 13 years ago.

Across the industry, storytellers who were once relegated to bootstrapping every project were now in the spotlight. For the first time in Canadian history, an all-Black creative team, including showrunners Marsha Greene and Annmarie Morais brought a Primetime series to life: The Porter in 2022. Amanda Parris would shine a bright, funny light on the tokenization of Black actors in Revenge Of The Black Best Friend. These moments are not sequestered in the world of TV. Documentarians Yasmine Mathurin and Sharine Taylor invoked thought-provoking conversations about the expatriate experience with One Of Ours (2021) and Tallawah Abroad (2019).

Short narrative films such as Fresh Meat (2021) by current CFC fellow Lu Asfaha uses satire (and unsettling sound design) to illustrate how society treats Black people in professional spaces. Kourtney Jackson’s Wash Day (2020), an intimate portrait of Blackness, is a personal favourite. Both films have gone on to receive genre-critical acclaim alongside their international festival releases. This barely scratches the surface of what’s been done and what’s coming soon.

When I ask the question “who is creating work that excites you?” I’m met with a million different answers: Joy Loewen, Lindsey Addawoo, Cazhmere, Kathryn Fasegha, Jackie Batsinduka, Fonna Seidu, Alicia K. Harris, Tara Taylor, Karen Chapman and on and on. Douglas summarizes this perfectly: “What I admire most about their work is the love they have for the community. It’s palpable. It’s in every frame, every decision in front of and behind the camera. Their fearlessness keeps me going.” There are many talented creatives rising the tides, breaking the rules and changing this world, so much so that this paragraph should be its own story.

Speaking it into existence

Years before Black Bodies (2020) caught the attention of Ava DuVernay and When Morning Comes was announced as part of TIFF 2022, I sat in Sandbox Studios surrounded by 60 or so other people for a private viewing of Kelly Fyffe-Marshall’s first short Haven (2017). For four minutes, we collectively held our breath as the intimate bond between a mother and daughter revealed itself. When the lights came up, the air was still and heavy with a mixture of emotions. After a quiet, reflective moment, producer Tamar Bird and Fyffe-Marshall shared their motivations and plans for the future. It’s a moment cemented in my memory bank. At the time, the goals felt astronomical in my small bubble. Today, those plans are twinkling moments in the past, and in their place is a present-day that far exceeds what I once thought was impossible.

I’ve watched peers and mentors alike make decisions, often without a guarantee they’ll be successful. I first heard Douglas talk with Sisterhood Media, a Black women-owned distribution platform from Samah Ali, as part of their On The Couch series. Her intention and words cut through the static that buzzed around my head. It’s more than clear that Douglas is in the role meant for her; she has repeatedly shown it. BIPOC TV and Film has constantly asked tough questions while hearing community feedback and creating career-tipping programming.

Years ago, after I left POV Film as a participant, I was excited to expand my world. Helplessness quickly replaced excitement as I realized that most of the industry felt out of reach. It wasn’t until I shared space with other young filmmakers like me, during a Black Women Film! Canada writing program, that excitement took hold again.

“Programs like Black Women Film! Canada have made it possible for people to get visibility, to be seen, to do all the things,” says Fyffe-Marshall, an industry veteran of over 15 years who has been a participant in BWFC programs. Nothing rings truer, having personally benefited from these spaces. Programs run by organizations like Alison Duke and Ngardy Conteh George’s OYA Black Arts Coalition and Frances-Anne Solomon’s CaribbeanTales’ Incubator live at the heart of our creative community – a community that fosters genuine support for one another in many ways, from acknowledging each other’s work to sharing opportunities. Stories developed by Lea Marin, the director of development at CBC, helped us realize that this moment was possible.

Times have been unprecedented for two years and we are truly living in a very thick chapter of history.

“We all can choose, and you can choose which side of history you want to be on,” says Bird. Black women firmly sit in the driver’s seat of the industry’s transformation and we, the passengers, continue to benefit from the journey. We have the massive opportunity to provide the fuel. Next time you see crisp, square-shaped graphics, a chance to celebrate or a call to action, take in the moment; tag a friend, give grace and flowers to the stewards of the Canadian film and TV industry.