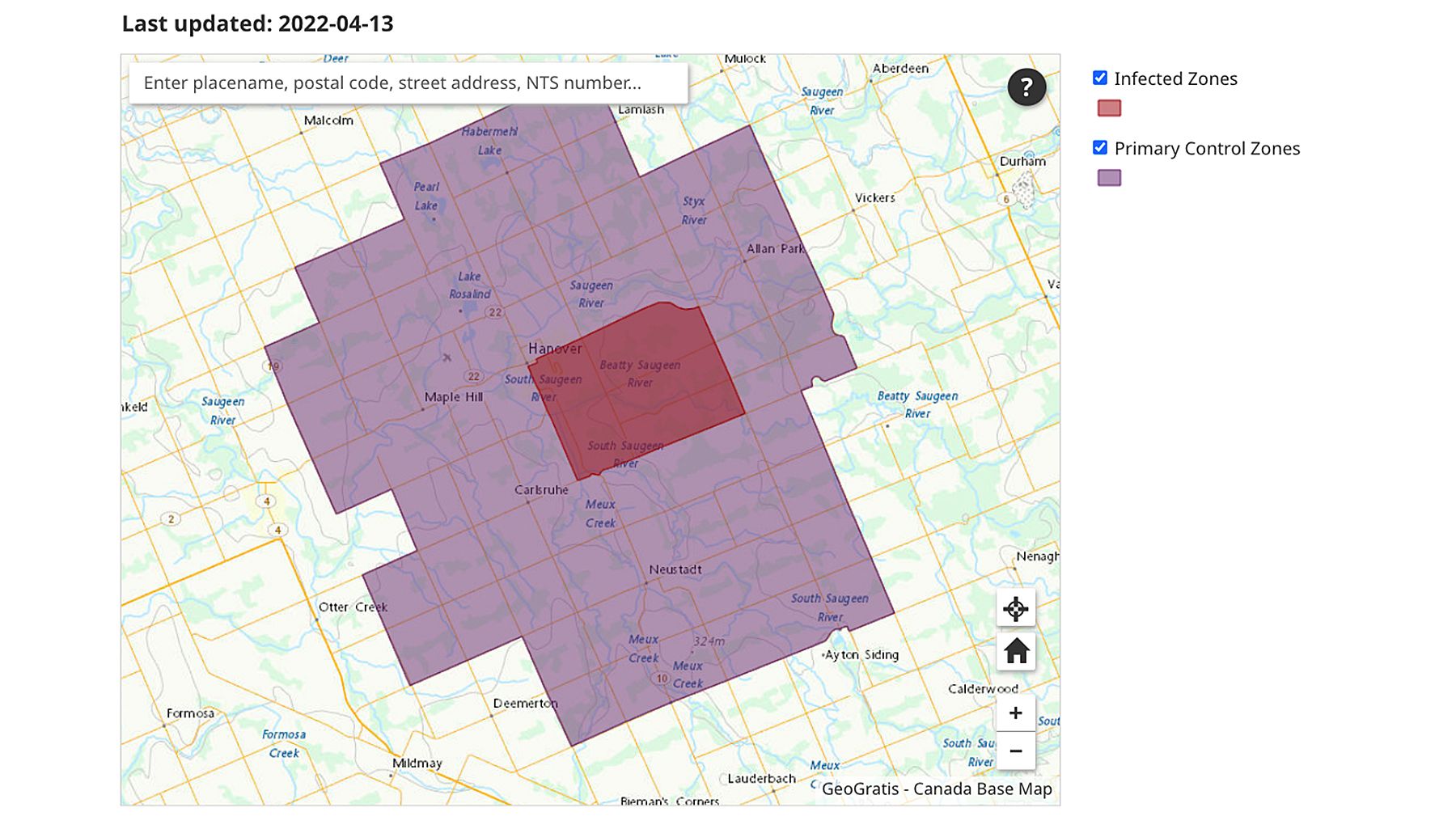 Bird flu has been confirmed in a commercial poultry flock in West Grey.

The Canadian Food Inspection Agency, which confirmed bird flu in a backyard flock at Neyaashiinigmiing on March 31, added the West Grey bird flu confirmation Wednesday, saying it was discovered on April 9.

An April 12 report of suspected avian influenza in the Hanover area was referring to the West Grey flock, said Lisa Bishop-Smith, of the Chicken Farmers of Canada.

She was answering media inquiries for the Feather Board Command Centre, which co-ordinates disease prevention and response for the Chicken Farmers of Ontario and issued the notice about the Hanover-area flock.

About 84,000 birds in commercial and backyard flocks have died or been destroyed in the outbreak in Ontario, according to a CFIA briefing Monday.

The new bird flu strain was first detected in Newfoundland in December, Nova Scotia in January and February, in March in Ontario and now it’s been found in Alberta.

“We’ve never really seen it in multiple provinces at the same time,” Bishop-Spencer said. “So that goes to show us just how pathogenic this is . . . for birds.”

She said the West Grey flock will be humanely euthanized and its barns sanitized. She said she doesn’t know the flock size or the type of birds involved.

The CFIA places all infected farms under quarantine and imposes movement control measures and recommends enhanced biosecurity for other farms within the quarantine areas, according to the agency’s website.

The CFIA established a roughly 10-kilometre radius around the infected farm in West Grey and will be testing birds in the area, Bishop-Smith said.

Other commercial poultry and egg producers near the infected farm will be quarantined too, in the “infected zone,” within about a three-kilometre radius of the infected farm, Bishop-Smith said.

The infected farm will have barricades at the entrance but no signs identify infected farms, so as not to raise undue public concerns, Bishop-Smith said.

Generally, in the smaller “infected” or red zone, a truck entering or leaving the property must have its wheels hosed down with disinfectant, she said. “There’s really tight biosecurity in that three-kilometre zone,” she said.

In the 10-kilometre zone, there are movement controls on trucks making deliveries, requiring them to have an entry permit, to allow for tracing movements, she said.

The 10-km zone shown on a map has a shaded area including the southern part of Hanover which reaches east toward Durham and west toward Walkerton, north nearly to Elmwood and south past Neustadt.

The Canadian Food Inspection Agency lists 14 flocks in which bird flu has been confirmed in locations across Ontario since March 27.

Bird flu is spreading across the world through bird migration and into commercial bird populations. It rarely causes disease in humans, the CFIA says.