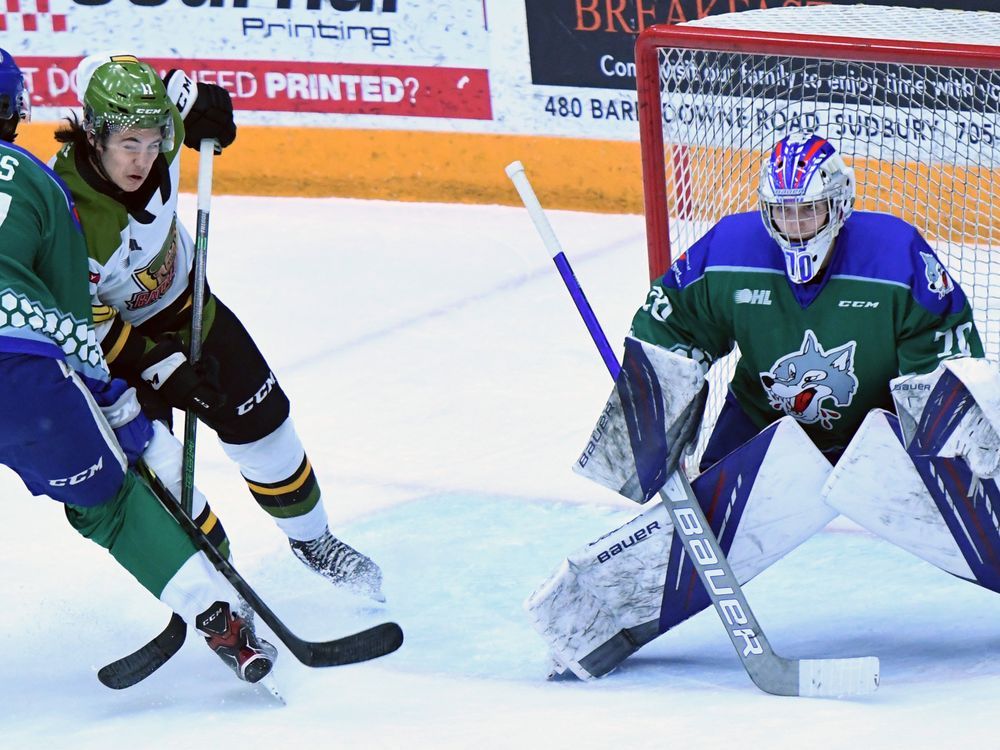 SUDBURY, Ont. — Kyle McDonald had two goals and one assist and Anthony Romani two goals Friday night to lead the North Bay Battalion to a 7-1 conquest of the Sudbury Wolves, putting the Troops into a first-place tie with the Mississauga Steelheads in the Ontario Hockey League’s Central Division.

Owen Van Steensel and Mitchell Russell each scored one goal and added two assists and Matvey Petrov had the other goal for North Bay, which clinched a playoff berth.

The Battalion improved its won-lost-extended record to 32-17-6 for 70 points, the same as Mississauga, which fell 5-1 at home to the Hamilton Bulldogs. The Troops, on a four-game winning run, and Steelheads each have 13 games left.

Goaltender Dom DiVincentiis made 23 saves in the first of back-to-back games at Sudbury, losing a shutout bid to a David Goyette goal at 13:09 of the third period.

Liam Arnsby returned to the North Bay lineup after missing 20 games with a leg injury suffered Jan. 16 in an 8-2 home-ice loss to the Barrie Colts.

For Sudbury, starting goaltender Mitchell Weeks gave up four goals on 26 shots before being relieved by Jonathan Lemaire, who surrendered three goals on nine shots before a crowd of 2,673.

Sudbury, which has lost three straight games, is 19-31-5 for 43 points, fourth in the division and trails the Peterborough Petes, who have three games in hand, by four points for the eighth and final Eastern Conference playoff berth.

The Battalion, leading 3-0 after 40 minutes, saw Van Steensel collect his ninth goal of the season off a short pass from Russell at 5:54 of the third period, ending Weeks’s night, before Russell circled the Sudbury net, skirted the left boards and slipped to the slot to beat Lemaire to the glove side at 8:50. It was Russell’s team-leading 33rd goal.

Seconds after Sudbury killed a two-man disadvantage lasting two minutes, Andre Anania, who had been in the penalty box, fed Goyette for a breakaway goal, his 25th. Just 42 seconds later, Romani took a pass from Dalyn Wakely and scored on a one-timer driving to the net. Owen Outwater had the other assist.

McDonald completed the scoring at 16:44, beating Lemaire to the far side on a setup pass from the right side by Van Steensel. Cam Gauvreau had his second assist of the game on McDonald’s 32nd goal, his 15th since a Jan. 5 trade from the Windsor Spitfires.

Petrov opened the scoring at 3:36 of the second period, taking a cross-ice pass from Grayson Ladd and one-timing the puck high over Weeks’s blocker from the left-wing circle. It was Petrov’s 31st goal.

Romani scored from the slot at 16:06 when he converted the rebound of an Outwater shot, with Wakely drawing the second assist. McDonald struck 1:47 later, arriving to slip home a Van Steensel rebound. Russell had the other assist.

Ladd fought Anania after he leveled Brandon Coe with a check to the head at 14:18. Anania received a head-checking minor and fighting major, while Ladd drew an instigating minor, major and misconduct.

The scoreless first period, penalty-free until the final second, was a high-tempo, hard-checking affair that saw the Troops outshoot Sudbury 10-9. DiVincentiis was called for roughing at 19:59 as part of a scrum in his crease. The goaltender was driven deep into the cage by a Sudbury attacker.

The Battalion appeared to take a 1-0 lead at 3:20 after Avery Winslow shot off a rush high on the left wing and Coe jammed repeatedly at the puck in the crease before Arnsby arrived to put the loose disc into the net. But video review resulted in the play being deemed offside, and the clock was rolled back 16 seconds.

The Battalion returns to the Sudbury Community Arena at 2:05 p.m. Sunday. The game can be seen live in North Bay on YourTV Channels 12 and 700.

BATTALION BULLETS: The Battalion has a 7-2-1 record against Sudbury with two meetings left on the schedule, both at Sudbury, where the Troops are 2-1-1 … The Wolves wore green-based sweaters to be auctioned online in a fundraiser for the Heart and Stroke Foundation … Each team went 0-for-2 on the power play … McDonald has a 12-game points streak in which he has 13 goals and seven assists for 20 points … The Battalion scratched Tnias Mathurin and Nic Sima … Assistant coach Bill Houlder turned 55, while Petrov marks his 19th birthday Saturday … The Battalion’s Ty Nelson was named an alternate captain of Team Red in the Canadian Hockey League-National Hockey League Top Prospects Game at Kitchener on March 23 … Among Sudbury’s scratches were Dylan Robinson and Liam Ross … The Wolves’ Kocha Delic turned 18 … Goyette leads the Sudbury offence and OHL rookies with 25 goals and 31 assists for 56 points in 53 games. He has an eight-game points streak in which he has six goals and eight assists for 14 points … Drew Jackson and Mike Marley were the referees.