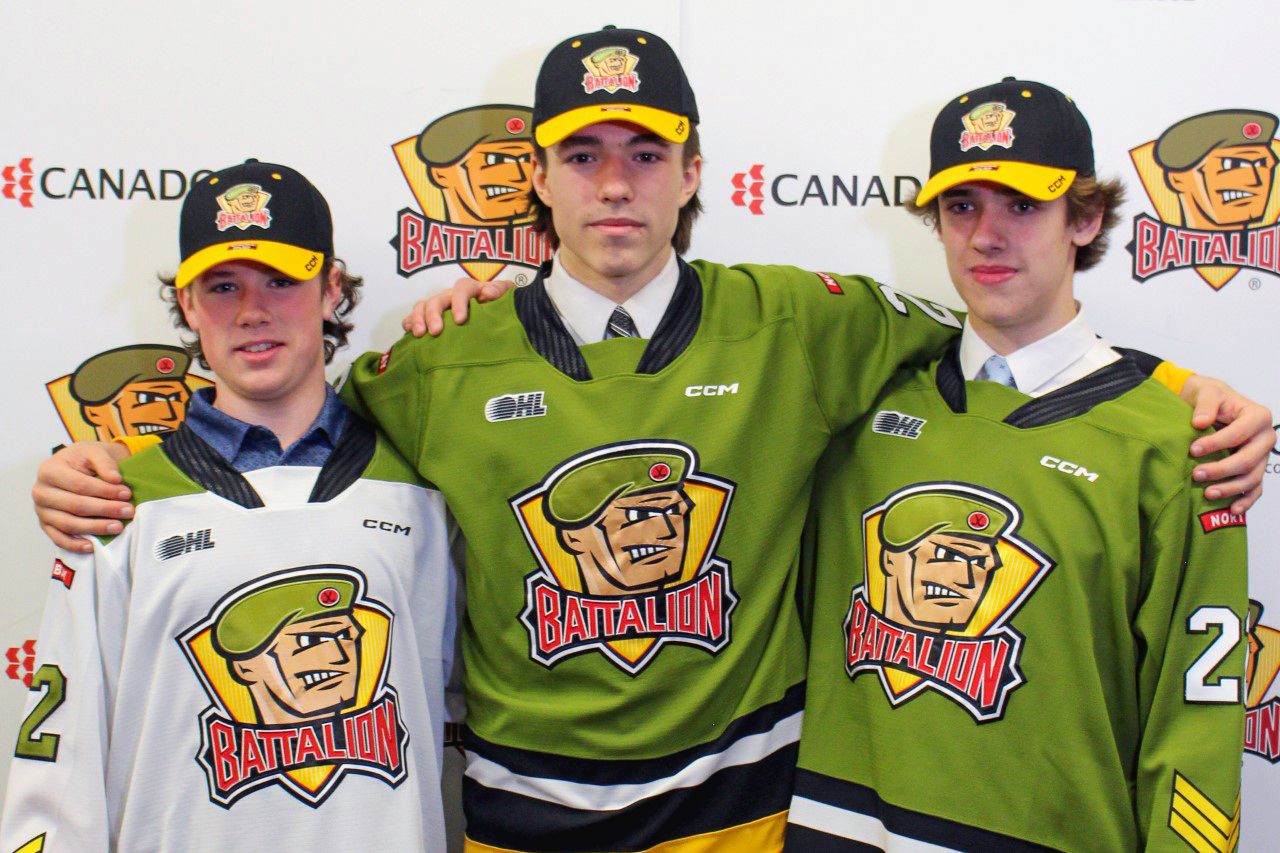 Right winger Ethan Procyszyn of the North Central Predators U16 team was the first-round pick, 20th overall, Friday night, when the first three rounds were conducted. Twelve more were held Saturday as the 20 OHL clubs made a total of 303 choices over the internet to the league office in Toronto.

By their minor hockey positions, three centres, six right wingers, one left winger, four left-shot defencemen and two goaltenders were selected by North Bay, made up of 15 Ontario players and one American. With two exceptions, all were selected from U16 teams.

After Procyszyn, and without a second-round pick, the Battalion chose right winger Jacob Therrien of the Clarington Toros and defenceman Brayden Turley of the Mississauga Senators in the third round before the end of proceedings Friday night.

Procyszyn scored 26 goals and earned 26 assists for 52 points with 28 penalty minutes in 27 games with the Predators this season and had three goals in six games with the junior A Collingwood Blues of the Ontario Junior Hockey League. The Wasaga Beach, Ont., resident measures six-foot-one and weighs 180 pounds.

“There’s not much he doesn’t do well, a high-character kid, captain of his team,” said general manager Adam Dennis. “I think he’s really going to solidify our centre ice position down the road and be a big, strong kid that you need in the playoffs.”

Therrien, who stands five-foot-five and weighs 152 pounds, has a much larger reputation. In 27 regular-season games, he had 24 goals and 14 assists for 38 points with 50 penalty minutes, adding five goals and one assist for six points with 10 penalty minutes in six playoff games. He had two goals in one game with the Clarington U18s and played two games with the OJHL’s Cobourg Cougars.

“I feel like I’m a pretty quick player, but I also like to play physical too and lay the body myself,” said Therrien, who, with Procyszyn and Turley, visited North Bay on Saturday. All players chosen are to attend an orientation camp May 14-15.

Dennis acknowledged that the diminutive Therrien had commanded attention early.

“Jacob was one of my favourite players, if not my favourite player, to watch this year. Electric, and he might be the hardest working kid in this draft. He’s very motivated. He’s a very organized kid, very smart, and he’s just a hockey player. He finds ways to make himself effective and plays way above his size.”

Other right wingers taken were Aidan Russell of the Toronto Jr. Canadiens in the seventh round, Lirim Amidovski of the Barrie Jr. Colts in the ninth, Beckett Ewart of Quinte in the 10th and Jesse Lefebvre of the North Bay Trappers in the 13th. Lefebvre is a Sturgeon Falls resident who scored 15 goals and earned seven assists for 22 points in 26 games with 40 penalty minutes.

Centres selected were Dylan Richter of the Elgin-Middlesex Chiefs in the fifth round, Nolan Laird of Clarington in the eighth and Nash Giles of the Toronto Nationals in the 12th.

The Battalion named left winger Jonathan Careri of the Markham Majors in the 14th round.

After Turley, the defencemen chosen were Tyson Rismond of the Sudbury Nickel Capital Wolves in the fourth round, Owen Kinghan of the Nepean Raiders U18s in the eighth and Nikolas Young of the Buffalo Jr. Sabres 15s in the 10th. Young is a resident of Lawtons, N.Y.

“I’d describe myself as a two-way defenceman who plays defence well and also likes to enter the play when I can,” Rismond, six feet and 180 pounds, said by telephone from home.

Among goaltenders, the Battalion took Mike McIvor of Quinte in the fourth round and Jack Lisson of the Oakville Rangers in the 15th.

“It feels unreal,” McIvor said via phone. “I know that North Bay is really serious about developing their goaltenders, and I’ve heard nothing but great things about North Bay and the city and fans.”

In addition, the Saginaw Spirit chose 2007-born forward Michael Misa of the Senators, who was granted exceptional player status by Hockey Canada, first overall. Saginaw won a lottery among the four non-playoff teams, with the Erie Otters, Sudbury Wolves and Niagara IceDogs following in that order atop each round.

Apart from the lottery participants, the clubs selected in inverse order of the overall standings, giving North Bay the 18th pick as its standard spot in each round. With compensatory selections in the first round, the Battalion had the 20th of 23 picks in it.