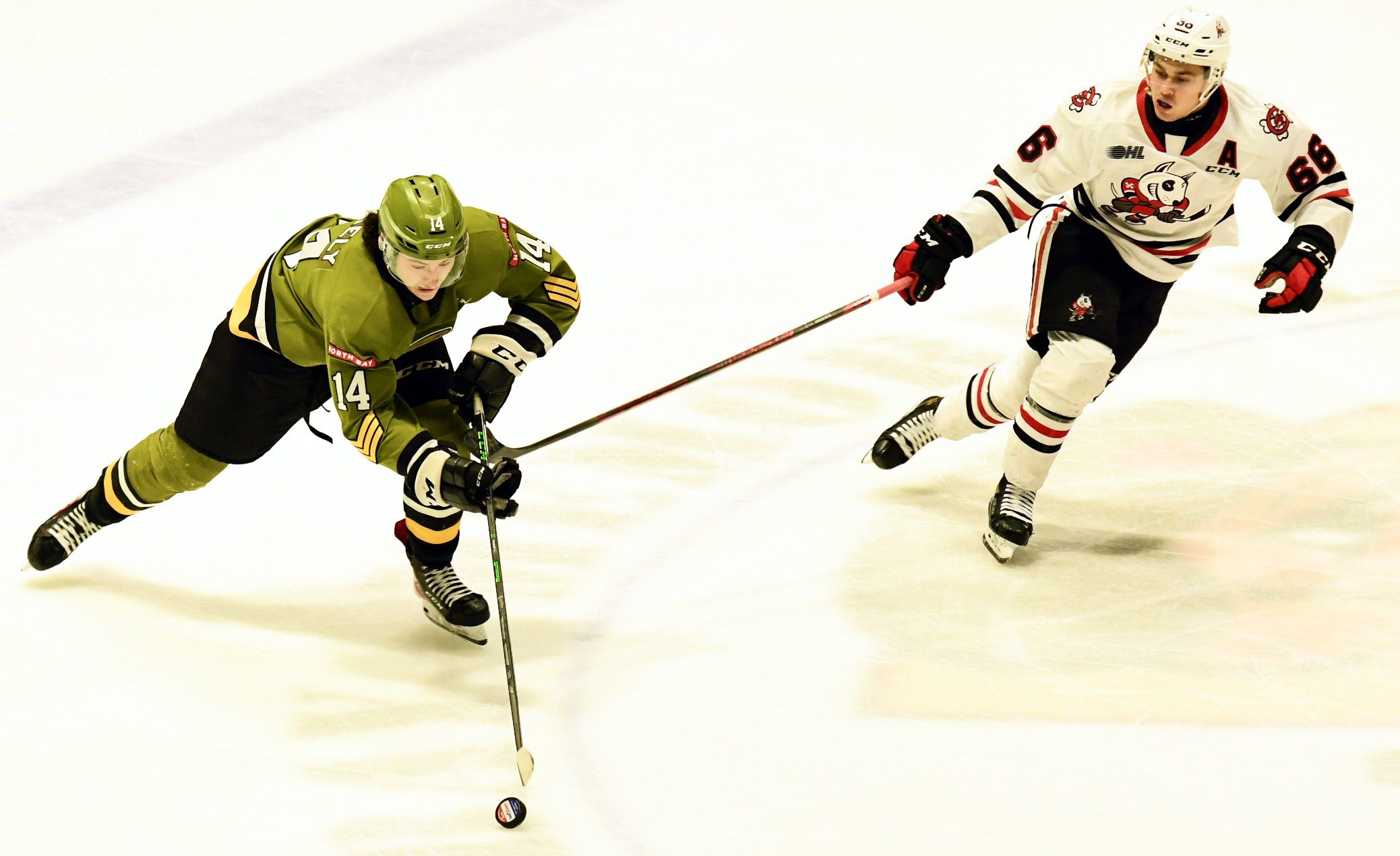 North Bay, sporting a won-lost-extended record of 38-18-6 for 82 points atop the Central Division, faces third-place Barrie as it comes off a Saturday night date with the visiting London Knights.

“We played them recently here, and it’s going to be that kind of a game, where we’ve got to be really detailed and dialed in defensively, and we’re going to have to capitalize when we can on their tight-checking defence.”

The Battalion, 3-3-2 against Barrie, edged the Colts 3-2 at Memorial Gardens on March 20. The teams complete their season series next Saturday night at the Sadlon Arena.

Barrie, 32-21-6 for 70 points, maintains hopes of a first-place finish in the division ahead of North Bay and the second-place Mississauga Steelheads, who were to visit the Ottawa 67’s on Friday night.

The Battalion defeated the Niagara IceDogs 4-1 Thursday night as Brandon Coe provided an empty-net goal and two assists, Matvey Petrov scored one goal and assisted on another and Kyle Jackson and Dalyn Wakely each scored once. The Troops outshot the visitors 47-22, including 27-7 in the second period, as Niagara goaltender Josh Rosenzweig put on a valiant performance with 43 saves.

A late scoring change removed an assist for Mitchell Russell on Wakely’s goal in favour of Petrov.

The Troops, 19-3-0 in their last 22 games, emerged from a scoreless first period to dominate play the rest of the way.

“We ramped things up a little bit,” Oulahen noted of the coaches’ approach to the second and third periods.

“Sometimes you’ve got to challenge the group to rise to the occasion a little bit. We weren’t shocked that the first period went the way it went. This team’s caused us issues all year but, saying that, the second and third period was pretty solid, and we’re real happy the way the guys responded to us.”

Rosenzweig kept his team in the game until Petrov made it 3-1 on the power play at 13:34 of the final frame.

“You’ve just got to stay with it, and eventually something’s going to go in,” said Oulahen. “You could see our guys kind of double-clutching. He’s a really good goaltender. I’ve seen him do that a few times against some other teams.

“Give Niagara credit. They battled. They competed. They were undermanned on the defence side of things, and they still caused us issues and battled hard. But you just stick with it.

“In the case of Matvey’s goal, I think it was just ‘bury your head and rip it as hard as you can,’ and it seemed to work.”

With Kyle McDonald sitting out as he faces possible supplemental discipline for a check on Chas Sharpe in a 2-1 win last Sunday at Mississauga, Wakely skated alongside Liam Arnsby and Owen Van Steensel.

“When he breaks through, he scores in bunches,” Oulahen said of rookie Wakely, who collected his 15th goal. “I thought he did a real good job stepping up in big Mac’s shoes there and playing on that line.”

The Barrie game is to be presented by the North Bay Youth Soccer Club.